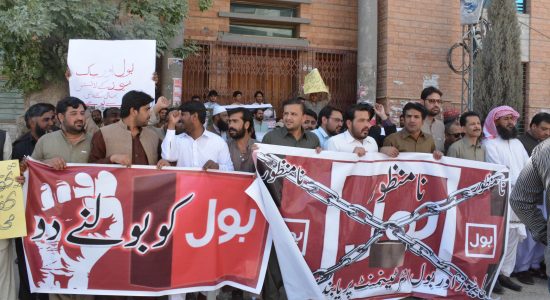 May 2017 Report by Freedom Network

Pakistan Press Club Safety Hub Network, managed by Islamabad-based Freedom Network organization, documented ten cases of violations against journalists countrywide during May 2017. These violations include killing of one TV journalist, attacks on seven TV and print media practitioners, ban on journalists’ entry, written threat and legal case by the state. Among these violations, six occurred in Punjab, three in Islamabad and two in Balochistan.

MURDER: The most serious case in May 2017 was killing of electronic media journalist in the Punjab province where ARY News channel correspondent Mian Abdul Razzaq from KHUDIYAAN KHAS town in Kasur district was shot dead on May 17, 2017, when highwaymen fired at him. The journalist was on his way to Kasur when he saw highwaymen looting people on the road. He began filming the looting and as robbers spotted him they fired at the journalist, killing him on the spot. Five days after the incident, police arrested some accused robbers and killed another robber Riffat Baba in “encounter” after investigation.

ASSAULT & INJURY: In May 2017, five journalists were attacked and injured. One case was reported from the Punjab, two from Islamabad and as many from Balochistan.

On May 17, 2017, Muqadar Hussain, ARY News channel correspondent from Patukey town, was  injured in Kasur district when highwaymen fired at him and his fellow colleague Mian Adbul Razzaq while filming robbery in broad daylight through mobile phone camera. Muqadar was injured in robbers’ direct fire getting bullet in arm. His condition is stated stable now. In federal capital Islamabad, Muhammad Idress of Ministry of Environment attacked state-run PTV News channel’s reporter Arslan Asad. A report was filed with police which took action against the assailant who made efforts for out-of-court settlement by tendering apology which the complainant accepted and the case was withdrawn against the official.

On May 19, Geo News channel’s sports reporter Akbar yosufzai was attacked by Capital Development Authority (CDA) officials while doing investigative story on officials allegedly violating court order regarding alleged “illegal occupation” of government land in F7 sector. A CDA assistant director along with others attacked the reporter. A compromise deal was reached after senior CDA officials and journalists urged the two sides to make compromising deal with apology from the attacking CDA official.

In Chaman border town in Balochistan, paramilitary Frontier Corps soldiers beat up and detained ARY News channel’s reporter Akhter Gulfam and cameraman Habib Khan on May 8, 2017. The channel crew was reporting clashes between Afghan and Pakistani border forces on May 5. Akhter Gulfam told Quetta Press Club Safety Hub manager that FC soldiers also “snatched” his camera besides thrashing. The FC soldiers, however, returned the camera after checking the video.

WRITTEN THREAT: Banned militant group ‘Balochistan liberation Front (BLF)’ issued local media in Quetta warning on May 3 against non-publication of its statements as the Balochistan government banned statements of outlawed BLA, ‘Baloch Liberation Front (BLF), Baloch Republican Army (BRA) organizations and other separatists groups in Quetta-based newspapers and barred private news agencies Online, NNI and INP from facilitating their statements. This ban by the government jeopardized safety and security of local journalists at the hands of banned militant, sectarian and other outlawed groups as provincial government failed to protect media houses and journalists from these groups attacking them.

LEGAL CASE: Taha Siddiqui, Islamabad-based senior journalist working for France 24 TV channel as correspondent, moved the Islamabad High Court against what he called the government “harassment” by using the federal Investigation Agency (FIA) to probe him for his online activism. “This is harassment and my petition seeks the high judiciary intervention to stop the government from harassing me,” the journalist said. The government is using new Prevention of Electronic Crimes Act-2016 to crack down on dissenting voices critical of the government, security establishment and “friendly countries” of Pakistan.

Six categories of attacks and threats against various types of media were documented during May 2017. These included four seven cases of violations against electronic media and four against print media.

Of the eleven cases against different types of media, four television media practitioners were attacked and injured, one related to physical elimination, four assaults and injuries and two ban by authorities. Of the four cases against print media practitioners, one related to written threats, one verbal threat, one ban on entry by authorities and one legal case by the state investigating agency.