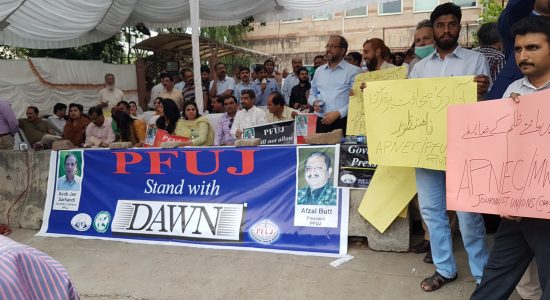 In March 2017, a total of eight cases of serious violations against media and its practitioners were documented by the Pakistan Press Clubs Safety Hubs Network. These included five journalists attacked physically and injured, one journalist detained and one journalist receiving verbal threats. Among these seven violations, five occurred in Sindh province and once each in Khyber Pakhtunkhwa and Punjab.

ASSAULT & INJURY: In April 2017, six journalists were assaulted and injured.

On April 17, 2017, a group of eight demonstrators protesting outside the Sukkur Press Club in Sukkur in Sindh province suddenly entered the press club and attacked journalists and damaged property. In the ensuing melee, five journalists – three cameramen and two reporters – sustained injuries that required medical attention. These included Nasir Jafry, cameraman for Geo TV, Faisal Arain, cameraman for newspaper Aman, Shah Wali, cameraman for Din News TV, Javed Memon, the resident editor of newspaper Awami Awaz and Jahanzaib Siyar of Abtak TV. Police later arrested two suspected attackers who were later released on the intervention of a ruling party senator. The other six suspects remain at large. Police has registered a case. In a separate case on April 23, 2017, Saeed Ehsan, reporter for C42 TV in Lahore was attacked and injured by security personnel for filming footage at the city’s airport despite having permission from the airport’s administration.

DETAINED: On April 23 Saeed Ehsan, reporter for C42 TV, was attacked, beaten and locked up at the Lahore Airport in the Punjab provincial capital. Ehsan was on duty recording footage on his mobile when a woman objected and asked him to delete her images. On his refusal she called someone and a while later some men in plainclothes arrived and whisked him away, beat him and locked him up. He was released 24 hours later. It transpired that the woman was the daughter of a former military official. The airport administration has officially allowed two Lahore-based TV channels to record images of passengers for the purposes of journalism.

THREAT: On April 15, 2017, Shahzaman Mehsud, reporter for newspaper Ummat in South Waziristan, received a threat though an Afghanistan-registered telephone. The unidentified caller warned him to desist from reporting or be ready to face consequences.

In April 2017, one case of a physical attack on a media establishment – the Sukkur Press Club – was documented by the Press Clubs Safety Hubs Network. A group of persons entered the press club on April 17, 2017 by force, ransacked the office and injured five journalists. There was no formal ban or enforced censorship on a media house reported this month. No information was available on any media house being served with a legal notice from either official quarters or from private parties.

In April 2017, a total of three categories of attacks and threats against a total of seven practitioners of various types of media were documented by the Press Clubs Safety Hubs Network and the media. These included four cases of violations against television media and three against print media.

In April 2017, the Pakistan Press Clubs Safety Hubs Network spent a busy month. Some of the key advocacy activities on journalists’ safety in this period included the following: