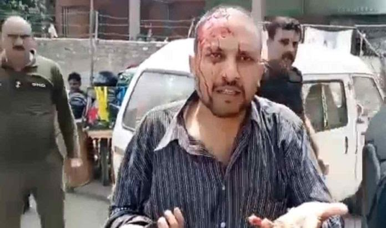 Three journalists were arrested, six other faced assaults, as many faced offline harassment as a total of 18 various cases of threats, attacks and harassment against journalists and media organizations were monitored and documented during August 2022 through the Pakistan Press Club Safety Hubs Network programme, an award-winning civil liberty organisation Freedom Network is managing since 2016.

Reporter Ilyas Soomro is seen handcuffed after police registered a case against him for his reporting on flood devastation in Thatta district.

ARRESTED: On August 8, 2022, ARY News channel’s director news Ammad Yousuf was arrested from his Karachi home by police and plainclothes men. He was arrested on sedition charges by police without a warrant in connection with controversial remarks made by Pakistan Tehreek-e-Insaf leader Shahbaz Gill during a current affairs programme on ARY News channel. The FIR was filed under sections 120 (Criminal Conspiracy), 124-A (Sedition), 131 (Abetting Mutiny), 153 (Provocation with the intent to cause riot), 153-A (Promoting enmity between different groups), 505 (Statements conducing to Public Mischief), 506 (Criminal Intimidation), 121 (Conspiracy against the State), and 109 (Abetting Mutiny) (Punishment of abetment). Furthermore, the interior ministry revoked M/S ARY Communications’ NOC, which was later stayed by the Sindh High Court and then lifted by the Supreme Court.

On August 19, 2022, Ilyas Samoo, a reporter for Sindhi newspaper Daily Awami Awaz in Thatta, district of Sindh province, and president of Bandar Press Club, was arrested by Sindh police for reporting rehabilitation of flood-affected families. The journalist was arrested and local police filed a case against him on suspicion of carrying an illegal weapon. He was later released on bail. The Sindh High Court took suo moto notice of the case and ordered the Inspector General of Sindh to submit his report on it after Freedom Network issued “Press Freedom Alert.”

On August 26, 2022, Jameel Farooqui, a BOL News channel’s anchorperson, was arrested in Karachi under a case was registered against him in Islamabad on charges of falsely alleging torture by Islamabad Police on an accused in custody. Later, on August 31, 2022, the journalist was released on bail.

KIDNAPPED: Faheem Baloch, editor of the online news website Sada-e-Balochistan and book publisher, was abducted on August 26, 2022, in Karachi by men in plain clothes. After two days, a FIR was lodged with the police for his kidnapping.

On August 22, a cameraman from Aaj News channel Ali was doing coverage at Banigala residential district in Islamabad suburb when Pakistan Tehreek-e-Insaf workers stopped him from recording because the channels were not telecasting speech of Imran Khan live, and the party workers ripped the journalists’ clothes. In another incident, Channel 5 channel chief reporter Nayyar Waheed was barred and pushed away from doing coverage by the same party workers.

On August 23, 2022, Abdul Baseer Qalandar, Aaj News channel journalist in Peshawar, was covering a protest in front of the provincial assembly when teargas shells were fired. He went to a nearby hospital to cover the affected people when the hospital security personnel snatched his phone and began abusing the journalist, preventing him from covering the affectees. His phone, however, was returned to the journalist following the intervention of the hospital’s spokesperson.

Azam Chaudhry, president of the Lahore Press Club, arrived at his office on August 27, 2022, to find a bullet on his desk. No group claimed responsibility for putting the bullet on his table. Senior police officials were requested to probe the matter.

ASSAULT: On August 9, 2022, three journalists, Wajid Mughal of 24 News channel, Arslan Baloch of Dunya News, and Mudassar Javed of Dawn News, went to cover a press conference by Pakistan Tehreek-e-Insaaf, the country’s leading political party, but were pushed away and not allowed to fix their cameras by party workers in Islamabad for not taking them into the frame. A police report was lodged against the party members, but no arrests were made yet.

On August 12, 2022, senior cameraman Awais Qazi of Samaa News channel and senior photojournalist Abdul Hameed of Daily Jang newspaper were present at the session court in Islamabad for the appearance of Shahbaz Gill when police assaulted them, resulting in injures for both of them. The journalists attempted to file a complaint at the police station but was not entertained.

On August 14, 2022, Amir Khan, a radio broadcaster and journalist in Peshawar, was at the bus stop when three unknown men pointed a gun at his head and took his bag, which contained research papers, important files, and a diary; when he tried to save his documents, the snatchers assaulted him and ran away by resorting to aerial fire.

INJURED: On August 4, 2022, a senior photojournalist Faisal Khan from the Daily Ausaf newspaper was covering a protest demonstration by teachers and government employees against removal of chief education officer in Rawalpindi when Punjab police barred the journalist to perform from doing his duty. later on he was assaulted and the photojournalist received face injuries.

THREATS VERBAL: On August 22, 2022, Javed Iqbal, correspondent of Nawa-e-Waqt newspaper in Dera Ghazi Khan District of Punjab province, received life threats from a criminal gang who looted people after he published stories and highlighted on the social media page. An FIR was filed against them, but the police appeared helpless to intervene.

FINED: A local court in Karachi sentenced 7 August 2022 ARY News channel journalist Asad Kharal to three months in prison and a fine under Section 500 of the Pakistan Penal Code for making baseless allegations against JS Group in his TV show in 2016.

OTHERS: On August 3, 2022, hackers defaced the YouTube channel of journalist and former ARY Newsbureau chief Sabir Shakir, renaming it ‘ARK Investments’ and removing all previously uploaded videos. They were able to livestream a video transmission about a possible economic crisis in the aftermath of the current turmoil caused by the Taiwan issue. According to reports, the channel had approximately 3,000 videos and 1.5 million subscribers. On Twitter, Sabir Shakir stated, “All videos have now been deleted, but efforts are underway to recover the channel, and hopefully it will be restored soon.” Sabir Shakir later recovered the channel.

PEMRA suspended the license of ARY News channel on August 08 accusing it of airing “false, hateful and seditious content.”