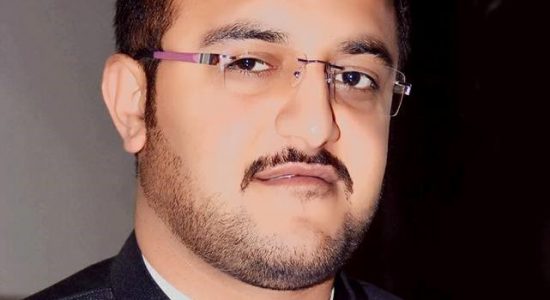 Paramilitary force raided house of Zafarullah Achakzai in Quetta on June 25 this year. Three days later, the Federal Investigation Agency (FIA) lodged a case of cybercrime against him and presented him in court. However, on July 4 he was released on bail. After his release, Freedom Network interviewed Zafarullah Achakzai to know reasons behind his arrest.

Freedom Network: Could you elaborate the fact as to why the FIA lodged a case against you for writing on various social media platforms? What exactly were you writing on/about?

Zafar Achakzai: Just like any other civilian, I used my personal ID to express my views on social media. There has been a baseless propaganda stirred up against me that I have written/done something against the institutions of the state – but that is not the case. Whatever I have written on social media, is open for all to see. However, I did raise some questions and demanded their answers. I have written nothing / hold no grudges against either the state or any of its institutions – yet I have become a victim of such an atrocity. The manner in which I was taken into custody portrayed me as a terrorist. On the last day of Ramadan at 5 o’ clock in the morning there was a raid at my residence and for the next three days, I was nowhere to be found. I am astounded by the fact that my arrest was brought into effect on the 25th of June – however the Federal Investigative Agency (FIA) had issued a cybercrime trial against me at 6 o’ clock on the evening of the 28th of June. They tried to depict the fact that I was taken into custody on that very evening however the CCTV footage of the raid at my residence belie these statements. There has been no investigation into the fact as to why was I kidnapped for three days and as to where I was kept captive. The FIA should be asked to respond to these questions.

Freedom Network: You were arrested at your residence. Could you clarify as to who arrested you and what happened after you had been arrested?

Zafar Achakzai: When I was arrested from my residence, I was blindfolded a few steps from my residence and was forced to wear a black cap. I had no idea as to where and why had these people kept a hold of me. When I was questioned, the blindfold and the black cap were replaced on my eyes and forehead respectively to ensure I couldn’t look at the person interrogating me. I was asked answers to a variety of questions.

Freedom Network: What were the questions that you were asked?

Freedom Network: Following the posts that you had made on social media, were you uneasy about being arrested and then charged with a cybercrime offence?

Zafar Achakzai: The questions that I had asked – their complete record is still intact. The case will be run by the FIA. I will present some antiquated records to the court. I had no idea that I will post my questions on the 24th of June and then be arrested on the morning of the 25th of June in such a brazen manner where the doors of my residence would be broken and chaos would rule the roost. I am bewildered by the fact that the reason for which I have been put on trial on this cybercrime case, the experts on laws’ opinion, is that if you need to complain about somebody/someone then you need to go to submit the complaint to the FIA first after which the FIA will seek for permission from its regional office. Then the permission to act on this complaint will need to be taken from the concerned magistrate and only then can evidence be collected from Facebook. Even after the evidence has been collected, another permission to seek arrest for the individual needs to be taken from the magistrate. Only after this can the arrest of the individual be made possible. Ideally, these entire chain of events require around 2-3 months to be completed in – whereas in my case I was arrested within 12 hours of outing up my post – something that even today I am surprised at.

Zafar Achakzai: As a journalist I had not gone through the act itself but had known that the act had been passed last year. I think whatever I have written, lies under the umbrella of the freedom of speech. I remained within the boundaries of the freedom of speech an asked the questions that I did. These are those questions that well revered journalists in Pakistan have previously asked on social media and have also become front page headlines across all the leading newspapers in the country. I simply followed up on those questions by inquiring about the whereabouts of the felons who seem to have disappeared into thin air – felons who become notorious for the misbehavior scandal that engulfed the nation a few years back. I have never targeted the government neither have I targeted governmental agencies nor do I intend to in my forthcoming years.

Freedom Network: The FIA has formally lodged a case of cybercrime against you. What do you think, the consequence of this case will be?

Freedom Network: You have been released on bail but the case is still ongoing. Could you give us some updates on where the case is at the moment?

Zafar Achakzai: The case is under the supervision of the judicial magistrate of Quetta, however thus far no hearing has been carried out because firstly there are still many cases ongoing in the court and secondly because recently there were the Eid holidays. I am hopeful that the first hearing session will commence very shortly.

Zafar Achakzai: After such an event there were bound to be changes in the way that I used social media but as I have repeatedly stated that even back then I did not say anything out of context. Nowadays, I am extremely stringent in the way I use social media and I have a designated periphery beyond which I do not usher. Furthermore, I have been informed by the FIA that I should refrain from using my social media account until my case is resolved with. I am now waiting for the result of my trial.

Zafar Achakzai: Yes, there is a sense of fear after an event as huge as the one that recently took place. It’s not only me but I have been scapegoated as an example for the rest of the journalist’s community as they are being threatened as well. This has led to a change in which people use social media in and around Quetta. Those people who are my friends or who know who I am have curbed using social media with the same zeal and zest that they used to use it beforehand.

Freedom Network: You said that people who used to use social media enthusiastically have denounced using this platform significantly. What message would you like to convey to them regarding how they should handle an entity such as social media?

Zafar Achakzai: The use of media as a viable or a violent platform is in the hands of the person himself however, curbing the right to speak is not something that people can be refrained from. Where ever possible, people should be allowed to criticize because without fair criticism the community cannot learn from it mistakes. We, the civilians of this country, should have proper rights to criticize – whether it be via social media, print media, and electronic media or by any other means. I would further urge the youth of this country to refrain using social media as a platform to hurl unheralded criticisms towards the government or any of its organizations. Criticism is a right only until certain limit is not exceeded.

Twenty-eight-year-old journalist Zafarullah Achakzai belongs to a Quetta-based Urdu newspaper Daily Qudrat. He received his initial education from Quetta after which he enrolled in Balochistan University and received a Master’s degree in Journalism and 12 years ago he became associated with Daily Dunya as a column writer. In 2008, he was awarded the Provincial Youth Journalist award whereas in 2010 he was bestowed upon the National Youth Journalist award by the then President of Pakistan. He received this award from Nawab Zulfiqar Ali Maski – the former governor of Balochistan on the 23rd of March, 2011.