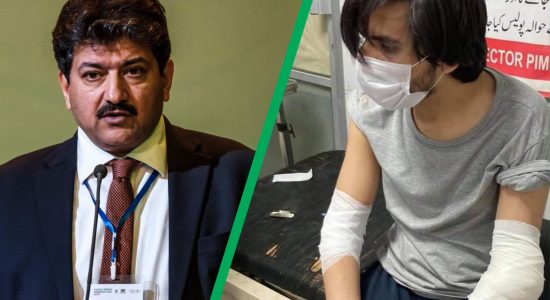 Geo TV channel censored its renowned anchorperson Hamid Mir for his remarks while YouTuber and journalist Asad Ali Toor was attacked inside his apartment in Islamabad as a total of 15 violations targeting journalists were monitored and documented during May 2021 by Pakistan Press Club Safety Hubs Network programme, an award-winning civil liberty organization Freedom Network is managing since early 2016.

INJURED: Journalist Yasir Ali Toor who is known for YouTube blogs supporting independence of judiciary, rule of law and Justice Qazi Faez Isa of the Supreme Court was attacked on 25 May 2021 inside his apartment in Islamabad by three unidentified persons who told him they “belong to (an) intelligence agency.” He told police the attackers tied his hands up behind and two legs. “They gagged me and tied me up, they were hitting their pistols on my elbows until one of them received a phone call and I got chance to resist and scream,” Asad Toor said in hospital where he was treated for his wounds. As allegation of alleged involvement of Inter-Services Intelligence (ISI) in attack on the YouTuber echoed soon after the incident ISI “totally distanced” itself from the attack issuing a rare statement to call on the authorities to go after the attackers who were seen leaving the journalist’s apartment soon after the attack on CCTV camera. Federal Minister for Information Fawad Chaudhry ordered police to probe the attack and Federal Interior Minister Sheikh Rashid said the police were “close” to arresting one of the three suspects. No arrest, however, is made.

ATTEMPT TO KILL: Arshad Iqbal, sub-editor working with Khyber News TV channel, was on his way home from office on 3 May 2021 when two unknown motorcyclists fired shots at him in Islamabad. A bullet hit him in the belly. He was taken to hospital for bullet wounds. Islamabad Police registered a case but made no arrest so far.

ARRESTED: Bannu-based journalist Hidayatullah was released on bail on 5 May 2021 by the Court of Session Judge Bannu after spending three days in prison following his arrest on 01 May 2021 for covering press conference of traders who alleged Bannu administration involved in smuggling. The administration denied the charge. It, however, registered a First Information Report against the journalist to help arrest him. Earlier, authorities in neighbouring Lakki Marwat district also registered an FIR against journalist Ghulam Akbar for reporting mismanagement in distribution of subsidized flour in the district.

CENSORED: Pakistan’s leading news and current affairs channel Geo News took star anchorperson Hamid Mir off air on 31 May 2021 after the journalist was accused of speaking against the state and security establishment during a protest demonstration outside National Press Club in Islamabad staged to condemn the attack on life of journalist Asad Ali Toor. Mir’s suspension comes before the channel’s senior management probes his address. Hamid Mir survived deadly attack on his life in April 2014 in Karachi and faced online harassment for taking up issues such as enforced disappearances of citizens and Press Freedom. Hamid Mir asked where pressure was coming on Geo channel when the management contacted him after his address. However, the management did not respond.

DETAINED: Cameraman Rehan Subhan of Dawn News channel was detained in Karachi on 12 May 2021 torturing him while he was on his way home from office. The cameraman informed Shahrah-e-Faisal Police Station’s cops that he was on duty still he was thrashed. The incident was brought into knowledge of senior police officials and SSP East Sajid Ameer Sadozai suspended constable Amir and three others – Abdul Rehman, Kashif and Imran three days after the happening.

Senior photojournalist Fareed Khan working for an international wire service was covering Covid19 lockdown in Karachi’s B Area when detained by police on 24 May 2021. The photojournalist introduced himself with journalistic credentials but the police put him in its van and roamed around 30 minutes before taking him to the police station “where I was kept detained illegally.”

A second incident of detention of journalist happened in Karachi on 25 May 2021 when senior reporter Syed Waseem of Dawn News channel when SHO Saudabad Rana Haseeb put in lockup for coverage at a private hospital. The police officer gave no reason for the detention.

Daily Dateline Pakistan reporter Zahid Korai registered First Information Report against Capital Development Authority’s official Zulfiqar Junego and Director Security Manan Fateh on 26 May 2021 for torturing him on premises of the CDA offices in Islamabad. The journalist said he was subjected to humiliation and harassment because of his journalism work.

ASSAULTED: A team of ARY News TV channel, including reporter Afzal Pervez, cameraman Nadeem Rasheed, DSNG operator Umar and driver Mujeeb, was attacked on 25 May 2021 in Karachi while covering Covid19 SoPs violations. DIG East Saqib Ismail Memon ordered an inquiry. It was revealed that employees of a restaurant attacked the team. Police arrested six persons for the attack.

VERBAL THREATS: Sher Ali, general secretary of ‘Senate Housing Society,’ Rawalpindi, threatened 30 May 2021 Raja Waheed Jangua, bureau chief of ‘Daily Samaa’ for publishing corruption stories against the society. Sher Ali is alleged to have first “offered bribe” to silence the journalist. However, when the money did not work, he got threats hurled at Waheed Jangua telling him he would face “severe consequences” for his reporting.

WRITTEN THREATS: Nawai-e-Waqt newspaper’s correspondent Javed Iqbal in Dera Ghazi Khan 17 May 2021 received a call from “03321949871” and caller introduced himself as ‘Khuda Buksh Chaktani,’ head of ‘Laadi gang.’ “You published news in (the) newspaper and uploaded same reports against us on social media. Stop, this, otherwise you would be killed. Additionally, your house could be destroyed through a bomb,” the caller told the journalist. According to him, the Laadi gang demanded Rs50,00,000 (five million rupees) as compensation. “The gang is actively involved in the criminal activities including, kidnapping for ransom, robberies and killing etc. Prime Minister Imran Khan visited South Punjab and ordered provincial government to launch operation against dacoits in the area. “The reporter used to publish news against the gang annoying the gang (and) threatened him,” First Information Report (FIR) the journalist registered read. According to FIR, “there are many facilitators of the gang in the area.”

Nine television, five print, one Internet and online journalist faced these cases during May 20121 as TV journalists continue to be more vulnerable and exposed to dangers.

In seven cases out of 15 threat actors were believed no-state actors while in four cases state actors’ involvement was suspected.