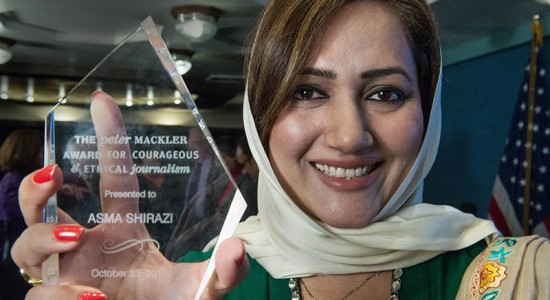 Award-winning journalist and TV anchor Asma Shirazi has said women journalists face safety and security issues and they are not provided equal opportunities in Pakistan to make name for themselves.

To mark the International Women’s Day on March 8, Freedom Network interviewed Asma Shirazi, who was the winner of Peter Mackler Award in 2014, to discuss state of women in journalism in Pakistan.

Freedom Network: Today, International Women’s Day is celebrated around the globe, including Pakistan. How do you see this day a women journalist?

Asma Shirazi: For me, being a woman everyday has its own importance. We cannot run our houses, countries or societies without equal participation of woman. As women play important role in development of societies. I consider every day as March 8 as my own day.

FN:  Are women journalist safe in their offices and in field?

AS: Journalists in Pakistan are not safe, both males and females. Impunity for crimes against journalists is a big issue in Pakistan, and if we talk of woman journalists only they are not provided a safe environment.  Women who are working as journalists were never provided with equal opportunities.  It is generally expected from woman that they must work from 9am to 5pm, and they are supposed to be working on soft issues, such as women issues or coverage of conferences only because it is believed that women are weak. Those who take a step to come forward and want to prove themselves they have to face hurdles in form of physical assaults and mental tortures. They are not provided with chance to work on issues, such as politics or current affairs. For me, women who are practicing journalism in Pakistan do not have a compatible and conducive environment to perform their duties efficiently.

FN: What are those problems which refrain woman from working as a journalist?

AS: In my opinion, there is lack of trust from media houses as women are considered weaker creatures. There are many incidents which I have faced in my career but I stood for my right and fought for myself.  In 2005, I was told that it would not be possible for me being a woman to cover the earthquake- affected areas. But I told my management that this is my issue how to survive in such conditions and covered the report.

FN: There are anti-harassment law in Pakistan.  Under this law, a committee has to be set up where women’s harassment cases are taken up. The media houses have such committees in their offices?

FN: What needs to be done to see more woman in journalism?

AS: They only need encouragement and trust. And they can prove that they are second to none with their commitment and contentment. After that there is strong need for providing better and enabling environment to bring woman in journalism. There is a dire need to build up confidence in women, which they can get from their home, educational institutions and the media houses. Unfortunately, women are not encouraged to cover the hard stories like conflict, politics, crime and sports. They are used as a fashion icon and provided with an opportunity to cover the conferences and women issues.

FN: What message would you like to give to young women who are adopting journalism as career?

AS:  There is only one message that I always give to young women that journalism is the most challenging job. You have to stand for your own rights and prove yourself that you are not less than anyone.