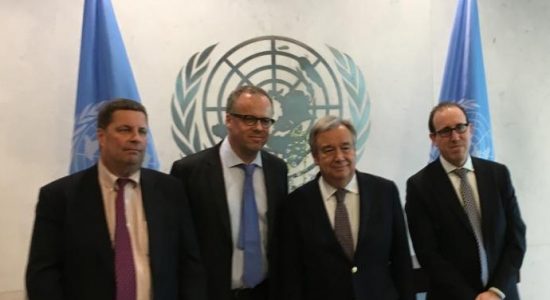 Reporters Without Borders (RSF) and the Committee to Protect Journalists (CPJ) urged UN Secretary General Antonio Guterres to take steps to address the urgent issue of safety of journalists.

“As journalists around the world are increasingly under attack physically and verbally it is encouraging and gratifying to have this kind of support from the Secretary General, said Joel Simon, CPJ’s Executive Director. We look forward to working with him to move this commitment forward.”

The goal of the #ProtectJournalists campaign is to establish a concrete mechanism that enforces international law and thereby finally reduces the number of journalists killed every year in the course of their work.

Statistics show that despite various UN resolutions related to safety of journalists and combating impunity, there have been few concrete results on the ground. In fact, the past five years have been the deadliest on record for journalists, with hundreds of journalists killed and many more attacked simply for doing their jobs. RSF reported that 78 journalists were killed in the year 2016 alone and impunity remains the norm, with full justice in only three percent of journalist murders in the past decade, according to CPJ research.

Murder is the ultimate form of censorship, and when a journalist is killed the right to information for the broader public is also imperiled. The world’s major problems, from environmental issues to extremist violence, cannot be resolved without the work of journalists.

A worldwide coalition of NGOs, media outlets, journalists and prominent public figures are supporting RSF’s initiative for the creation of a Journalist Protector. CPJ, the Associated Press, WAN-IFRA, Amnesty International, Human Rights Watch, Bangkok Post, and the Brazilian Center for Investigative Journalism (Abraji) are just a few of the more than 120 organizations that have joined the coalition to date.

This week several coalition members, such as the James W. Foley Foundation, the Syrian Center for Media and Freedom of Expression, and the Pakistan Press Foundation, sent letters to Secretary General Guterres echoing the call for the appointment of a Special Representative.