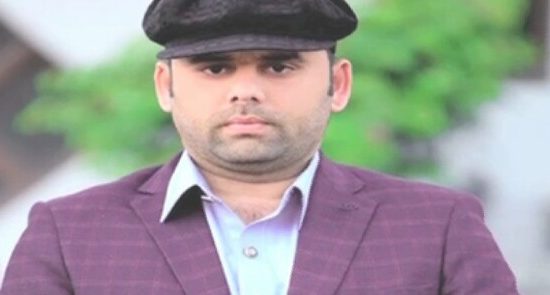 ASSASSINATION: Two journalists were murdered – both in Punjab. Zeeshan Ashraf Butt, correspondent of Nawai-e-Waqt newspaper in border town Sambrial in Sialkot district. The other murdered journalist was Anjum Muneeb Raja in Rawalpindi. He worked for Daily Pukaar as sub-editor.

Zeeshan Ashraf Butt was doing a story on new taxes imposed on local shopkeepers in Sambrial town, according to Nauman Ghuman, chairman of Sambrial Press Club. An audiotape of 1.6 minutes surfaced later in which the murdered journalist was making phone call on March 27, 2018, and gunshots are heard when the journalist was telling that someone was threatening to kill him. The following is transcription of the audiotape:

Zeeshan Butt: “Assalam o alaikum (hello in Arabic)! Madam, I am Zeeshan Butt calling you from Sambrial.  Madam, I went to union council, Begowala, today to get details about taxes.

Anjum Muneeb Raja was shot dead while on his way home on March 3, 2018, in Dhamial Camp in military cantonment. Police arrested his colleague for suspected involvement in the sub-editor’s murder. No motive to link his murder to his journalism work yet has been confirmed.

ABDUCTION: Tribal journalist Shah Zaman Mehsud, who works for Ummat newspaper, returned home five days after he was whisked away from his residence in Tank district on March 27, 2018. “I think official the people who took me away were state actors,” he told Freedom Network. “I was not tortured during these five days and told: ‘If you are innocent you will go back home.’ I am back and it means I am innocent. I think political administration (of South Waziristan) is angry at me for my reporting,” the tribal journalist went on to say. Zaman is doing journalism since 2001 and worked for different national media houses in the country. “The political admin has threatened me several times when I made critical reports.”

ARESTED/DETAINED/HARASSED: Three journalists, including a female, faced harassment for their works. Female reporter Nayab, who goes by one name, harassed while she was working on assignment in Peshawar March 19, 2018. She works for Neo News TV channel. Her cameraman colleague Dost Muhammad received punches on his face.

Peshawar police arrested the accused and invited the journalists to identify. During the identification process, the accused again hurled threats at both. “You will face the consequences if do not withdraw complaints,” the accused were heard telling the Neo channel’s crew. The accused was making video of the crew and Ms Nayab snatched the mobile camera from him to delete the video. On this, the accused stared abusing her. The crew told Freedom Network that they called office to inform the bureau chief who immediately called police.

Federal ombudsman for Protection against Harassment of Women in Workplace Ms Kashmala Tariq harassed senior journalist Matiullah Jan and his Waqt TV channel’s crew which went to record her interview on March 8,2018, in her office in Islamabad. The ombudsman asked her staff to take recording back from Matiullah Jan, who hosts talk-show “Apna Apna Gareban.” The ombudsman previously also showed her disrespect to media-persons. The journalist’s editor tweeted to report harassment of her journalist. It appears the government had taken no notice of her behavior.

ASSAULTED/INJURED: Five journalists were assaulted in Khyber Pakhtunkhwa, Punjab, Sindh and Islamabad. Dost Muhammad, cameraman working for Neo News channel in Peshawar, was attacked on March 21, 2018, while interviewing a woman for TV package. He received punches on his face when some people interrupted him. The accused were arrested and the cameraman and his female colleague identified the attackers who even hurled threats during police custody.

Journalist Pervez Iqbal, who works for Metro Watch newspaper, was attacked in his bureau in Rawalpindi on March 6, 2018. The accused, Filp Maseeh and his accomplices, attacked the newsman for publishing news about attackers’ bogus education certificates. The police arrested the accused after registering case on behalf of the journalist.

Reporter Hafiz Waseem, who is also general-secretary of Taxila Press Club, Taxila, was subjected to second degree of violence on March 26, 2018, when he tried to take shots at a petrol pump which was suspected having poor measuring tool to supply fuel to customers. “As I wanted to take shots of measuring tool the owner (of the filling station in Taxila town) got angry calling on his employees to attack me,” the reporter told Freedom Network. “I the course of attack, they broke my leg,” he said.

In Karachi, Samaa News channel’s reporter Khurram Gulzar was fired at on March 27, 2018, when he was on his way to home from office. He was safe in the assassination attempt. Last year, he was taken away in “mistaken identity case.” The journalist told Freedom Network: “I am clueless and don’t know why and who may have been behind the firing. I am thinking to quit the profession.”

Suspected supporters of Pakistan Muslim League (Functional) attacked journalist Jan Muhammad Mughal, working for Daily Mehran newspaper in Khairpur district of Sindh province, at his residence at mid-night on March 11, 2018, for his report on the part’s protest rally. “They have beaten up me and my family members and warned to behave,” the journalist told Freedom Network.

ATTACK ON PRESS CLUB: Angry mob attacked press club in Mirpurkhas district in Sindh province after the news of clashes between Hindu and Muslims during Holi festival was blacked out by the media as the security agencies suggested. Rashid Saleem, president of Mirpurkhas Press Club, registered case with police and two nominated accused were arrested under Anti-Terrorism Act.

ATTACK ON DSNG VAN: During the convention of Central Executive Committee, supporters of Pakistan Muslim League (N) supporters attacked Digital Satellite News Gathering (DSNG) of ARY News channel outside Convention Centre in Islamabad on March 13, 2018. As the meeting was over and participants were coming out some supporters of the ruling party rushed towards the DSNG van of the news channel, which is very critical of the PML-N. The party supporters also harassed ARY News staffers besides chanting slogans against the channel. Police stood nearby and did not intervene to rescue the crewmembers of the channel.

In the month of March 2018, a total of six categories of attacks and threats against a total 15 practioners of various types of media were documented by Pakistan Press Club Safety Hub Network, managed by Freedom Network.

These included seven cases of violations against print media, six against television media and two cases of attacks one each on journalism institution – press club – and residence of a journalist.