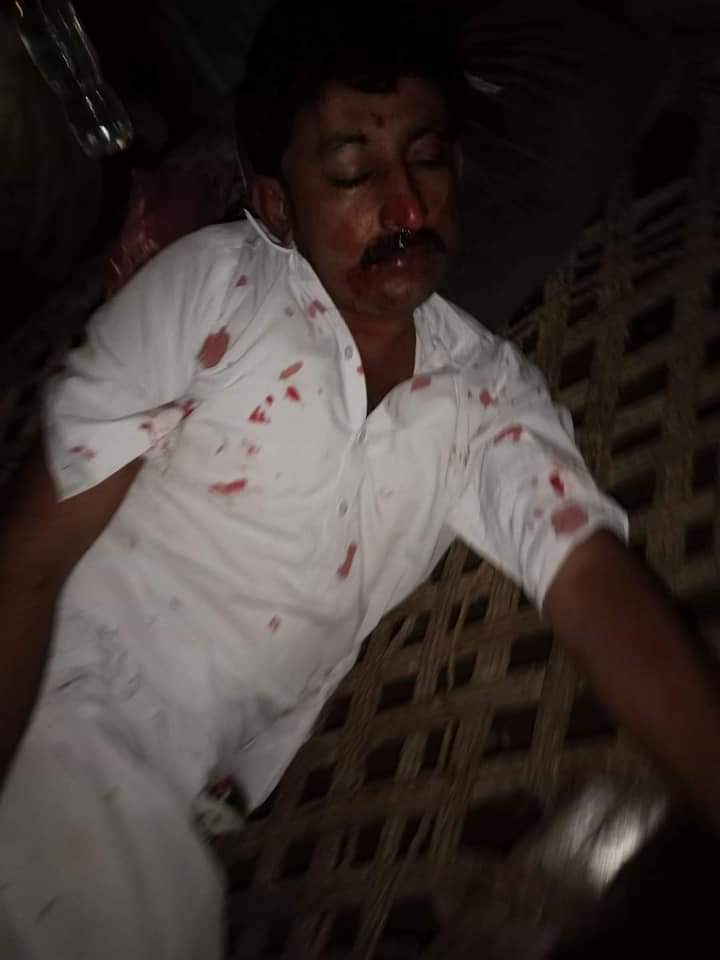 ATTEMPTS TO KILL: Journalist Ghulam Qadir, who works for Time News and Daily Panhannji Akhbar, was attacked in Sanghar district in Sindh province on 13 August 2021. The attack on his life came after his reports on Jirga a local landlord was holding. The landlord’s son and some other people attacked the journalist. “As I was returning home that day, I was attacked and received head injuries,” the journalist said. First, he was treated in Hyderabad hospital but later shifted to Karachi as the head injuries were described serious. Sindh Police registered a case but mad no arrests so far.

Mehran TV reporter Qazi Shafqat was also attacked in Mipur Mathelo in Sindh province while working on “karo kari” story. He received injuries and was under treatment at a local hospital. “The karo kari story I was working on is the cause of the attack,” he told Freedom Network.

ASSAULTED: On 17 August, Samaa TV reporter Maqsood Ahmed Sufi in Azad Jammu and Kashmir was victim of police attack while on duty covering police allegedly torturing a boy in Muzaffarabad. “I saw some cops beating a boy and started filming with my cellphone. The cops asked me stop filming it and as I introduced myself as journalist showing press card, the cops snatched my cellphone tearing my cloths and started beating me up,” the journalist told Freedom Network. “The cops used abusive language and threatened to fix me.”

OFFLINE HARASSMENT: Geo News channel reporter Tariq Abu Al Hassan and BBC Karachi correspondent Nabil Akhtar were harassed outside the Governor’s House by the policemen in plainclothes. They also snatched mobile phones from the two journalists. The two journalists were on duty covering protest by relatives of missing persons on 30 August 2021. “Plainclothes personnel were torturing the protesting motorcyclists and as we started filming them, the cops snatched our mobile phones and one of them torturing Nabil. The issue was brought into notice of senior police officials who suspended one cop.

Daily Markazi reporter Tariq Anjum told Freedom Network that officials of DHQ Hospital in Jhang district in Punjab province harassed and detained him briefly 17 August 2021 after he visited the place for reporting purpose as the hospital management declined to share information under right-to-know law. “I was locked inside a room and some goons slapped me on face,” he said. “I was released hours later and police refused to take any action.”

ATTACK ON HOME: Editor Daily Afaaq Ijaz Cheema told police unknown persons attacked his home 23 August 2021 in Media Town in Islamabad. The family remained safe in the attack, he said. Two bullets hit his parked car. “This is the second such attack,” he said. However, police believed it might be the case of “aerial firing.”

VERBAL THREAT: Royal News channel reporter Mehmood Khan received 16 August 2021 “threatening calls” after he contacted a person for his version about a fraud case story the journalist was working on. “As the person in question talked to me and said he would call in three to four hours, I began receiving these threats,” the journalist said. “The threats included kidnapping and murder,” he added. The callers warned the journalist against anymore working on the story. Local police registered a case but made no arrests so far.

LEGAL CASE: Federal Intelligence Agency (FIA) issued 23 August 2021 a summon to Online news agency chief editor Mohsin Jamil Baig in alleged money laundering case. The summon follows the journalist’s criticism of the government policies during television talk-shows. The journalist said his name was included in a case the FIA made against some businessmen in Karachi.

ATTACK ON MEDIA OFFICE: An angry group of tribal protestors attacked 05 August 2021 the offices of Pushto-language Khyber News channel in Peshawar and its reporter Hazrat Khan Mohmand. One person injured in cross-fire between police and the protestors, it was reported. The protestors, mostly supporters of some businessmen, demanded “action” against Hazrat Khan Mohmand by the channel for “unethical reporting.” The journalist denies the charges.

In five out of nine cases of threats state actors were believed involved while in one case landlord and another while in two cases the threat actor was unknown.