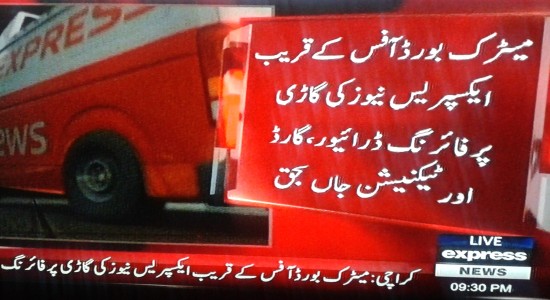 The two-member ministerial committee of Prime Minister Nawaz Sharif has met media houses’ representatives, working journalists and media development and safety expert to thrash out a comprehensive plan for safety and security of media organizations, media-practioners, representative offices of regional unions of journalists and press clubs across the country.

It met in Islamabad on February 4 and both Interior Minister Chaudhry Nisar Ali Khan and Information Minister Pervez Rasheed attended the meeting lasting well over an hour.

The interior minister was frank to admit that there could be “no easy quick (and) quick solutions” to overcome the growing sense of insecurity among the media houses and the working journalists.

It came as shocking when three media assistants and one TV journalists were killed in the span of 17 in January days with Express News channel being targeted for third time in five months.

A day later, Prime Minister Nawaz Sharif responded to the crisis situation constituting the two-member ministerial committee to come up ways and means to secure the media houses and protect the working journalists.

The security situation has gone from bad to worse with sectarian and groups, mafias, militants and other pressure groups have been attempting to take editorial control over the newsroom dictating where and how their news should be entertained.

While the representatives of print and electronic media looked extremely concerned at the alarming situation of security the interior minister said, “we need to have more meetings.” He suggested giving the participants a week time to come up with data and start work on the safety issue.

“I will work with you for maximum security. Ground rules should come from the media houses,” the interior minister added.

The Tuesday meeting is the first such interaction between the government and media ever since attacks have grown in numbers and journalists killed more than before.

FN believes current security threat will only be tackled if multi-based, multilateral and multi-stakeholder approach was adopted. It remains to be seen the Tuesday meeting will melt ice.

Earlier report on attack on Express News van in Karachi

Freedom Network is appalled by killing of three media assistants of Express News TV channel in Karachi on Friday evening. They were target-killed as one police account says 17 shots were fired at the Digital Satellite News Gathering van of the channel.

“The Friday evening attack on van of Express News channel targeting the three media assistants is a stark reminder of the threats Pakistani media is facing. It appears the government is not taking these attacks seriously,” Freedom Network said expressing sympathies with the bereaved families who lost loved ones in this barbaric attack.

The Express News channel’s van was targeted Friday (January 17, 2014) evening in a busy neighbourhood of Karachi, the channel said.

The killed assistants include driver Khalid, technician Waqas and security guard Ashraf – died within moments of the incident when two gunmen riding a motorcycle opened fire on the vehicle.

The Friday evening attack on Express News van is the third attack on the channel for the last five months. Earlier, Express Group’s offices were attacked in Karachi last year and Sindh police had so far made no significant progress in both the previous attacks on the Express group.

“Our three colleagues have been killed,” the channel said in its 9pm News Bulletin.

Express Tribune reported that “the three victims were shot multiple times from close range. They died due to excessive bleeding.”

Police said they found at least 17 shell casings from 9mm and 32-bore pistols at the crime scene. These were sent to the forensic division.

Investigators also believe that a single group is behind all three attacks on Express Media Group.

“I am 100 percent certain this is a targeted attack,” said District West police chief Javed Odho. He said the terrorists who carried out the attack had been identified as Taliban, according to Express Tribune.

“An investigation team has been constituted… the team will also collect the details of police officers who investigated the previous attacks on Express Media Group,” he said.

Banned militant organization Tehreek-e-Taliban Pakistan said its gunmen had carried out the attack with spokesman Ehsanullah Ehsan talking to Express News channel Javed Chaudhry that the channel was “warned” earlier to “stay away” from propaganda against the Taliban.

“We accept responsibility. I would like to present some of its reasons: At present, Pakistani media is playing the role of (enemies and spread) venomous propaganda against Tehreek-e-Taliban. They have assumed the (role of) opposition. We had intimated the media earlier and warn it once again that (they must) side with us in this venomous propaganda,” TTP spokesman Ehsanullah Ehsan told Express News.

Pakistan Federal Union of Journalists condemned the attack on Express News and announced countrywide protest to demand security for journalists and media houses.

The channel said both police and paramilitary force made no efforts to arrest the attackers who fled on motorcycles after leaving the three media assistants killed.

In the first attack on August 16, 2013, unidentified gunmen opened fire on the group’s office in Karachi, injuring one female staffer and a security guard. In the second attack, on December 2, 2013, at least four armed assailants opened fire and tossed homemade bombs at the same office, injuring a guard in the process.

Despite visiting the Express Media office in Karachi twice and constituting investigation teams to probe the two incidents, law enforcement agencies have been unable to arrest even a single perpetrator.