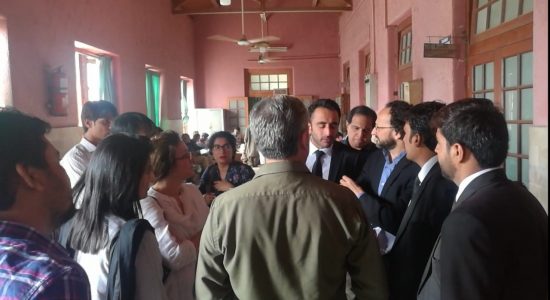 The pressure had been building up. Family members were approached. Polite and ‘friendly’ advice was conveyed that I needed to watch out. Somebody somewhere was getting unhappy with my reporting and analysis. It had been tolerated when I worked for the BBC as their Pakistan correspondent. But now things were different because I was working for a Pakistani TV channel, Dunya News.

It was happening in a particular political context. In 2018, as Pakistan was being dragged through blatant attempts at manipulation of its political landscape by the powers-that-be, efforts to control the national media also had become more insidious. Space for thoughtful and critical journalism was rapidly shrinking. News channels were going into the default self-censorship mode. Those obsessed with ‘controlling the narrative’ were able to bring large parts of Pakistan’s news media under their thumb.

In the age of proliferation of fake news, it was a double blow for the Pakistani news media. Whatever trust and credibility that remained, was further eroded. Many news channels and prominent anchors had to fall in line to promote state propaganda. Those who refused to submit were either fired or chose to call it a day.

By the end of 2018, I felt the pressure was building on me too. Scurrilous trolling on Twitter was becoming intense and serious. You could tell it was orchestrated as most of the accounts abusing and attacking me had a picture of the Pakistani flag, a numeric Twitter handle with usually less than 25 followers.

I ignored it and carried on with my journalistic work. But by March 2019, it came to a point where threats and warnings became more specific and relentless. I was acutely aware that if the unaccountable powerful elements of the state were coming after me, and the news channel wouldn’t be able to protect me. I told my bosses I would be moving on at the end of April 2019.

But by then, rogue elements in Pakistan’s intelligence machinery had already decided to come for me. The Federal Investigation Agency (FIA) was instructed to file a case of cyber terrorism and defamation. The plan may have been to arrest me and splash my handcuffed face across news channels, as had happened to some other bloggers and journalists. But I was fortunate to be out of Karachi on a reporting assignment in Thar Desert in Sindh province.

Upon my return to Karachi, the first thing I needed was to secure a pre-arrest bail. I waited for the channel to offer guidance. But it soon became clear that my employer had turned its back on me. I had to make my own arrangements.

Help came from people and organisations I least expected. People I did not know and had not met until then, got in touch to offer support. These consisted of lawyers willing to take the case pro-bono, activists offering to guide me through the deficiencies and abuse of the law, and enraged journalist colleagues who saw this as yet another case of harassment and intimidation by the State.

Then began the court hearings. Over the next several weeks, I would make about a dozen or so court appearances. As a defendant out on bail, I had to be on time at every hearing, but the prosecution would often fail to show up on one pretext or another. I was told that this could drag on for months.

During this entire process, I never saw the complainant, a Karachi lawyer with a questionable reputation and a track record of bringing about frivolous and concocted litigation at the behest of powerful forces. I was told he only made a brief appearance at the first hearing.

As the case progressed, condemnation of abuse of law and authority poured in. Reporters without Borders (RSF), Human Rights Commission of Pakistan (HRCP), Karachi Union of Journalists (KUJ), Pakistan Federal Union of Journalists (PFUJ) and other human rights organisations denounced the harassment and intimidation of a journalist. Dawn newspaper wrote strong editorial comments and the story was covered by international broadcasters British Broadcasting Corporation (BBC), Voice of America (VOA) and Deutche Welle (DW).

While I was busy defending myself in court, my employer Dunya News fired me. The official letter cited a financial crunch as the reason for the dismissal, but I was told that the ‘pressure’ from powers that be became ‘unbearable’. The channel was kind enough to settle my outstanding salary, something that is often seen as a concession, rather than an employees’ right in Pakistan. What got me through the ordeal was the amount of support I received from far and wide. Throughout my court hearings, journalist friends and colleagues from digital rights group, Bolo Bhi and the Freedom Network insisted they come along with me.

I was struck by the support I received from former colleagues from my days as South Asia and Middle East Editor at the BBC in London. They were under no obligation to look out for me, as I had left the organisation in 2016. Perhaps it had to do with basic human decency and about a sense of personal loyalty they thought they owed to someone they had once work with. Throughout my case, my former colleagues regularly checked in with me and helped raised the issue with the British Foreign Office and journalist safety organisations like RSF.

The Pakistani parliament’s National Assembly Committee on Human Rights called me for a hearing. Parliamentarians from across party lines under the chairmanship of Bilawal Bhutto-Zardari pledged to review the contentious Prevention of Electronic Crimes Act (PECA) law, applied on me, to prevent its abuse by state functionaries.

The case against me was eventually thrown out by the court. I consider myself incredibly lucky to have come out of this episode with my sense of dignity and integrity intact. Many other citizens and journalists who have gone through far worse experiences than I, have not been so lucky. Some have suffered physical harm, others psychological trauma. Still others have been rendered jobless because of their critical views of the government and the army’s manipulation of democratic institutions.

Pakistan has lots of shady characters in the media, in politics and in our court system; but the country also has some really incredible, selfless and courageous people. These people are not daunted by threats, pressures and harassment. Every day, away from the propaganda machinery, they are fighting for a country where the citizens’ fundamental rights are respected and protected. Our hope lies with them and the incredible work they do, often at great personal risk.

The author is Senior Editor at DW News in Berlin.

Caption: The author (3rd from R) is seen during his appearance before a court in Karachi to defend himself against a legal case the government filed against him after his tweets.