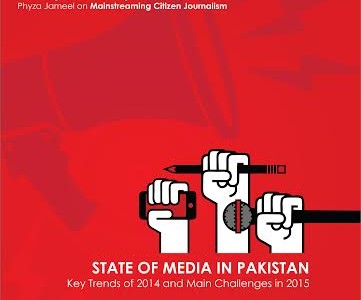 ISLAMABAD, January 25, 2015: The year 2014 was the worst ever in the history of Pakistan for the media with the highest number of casualties ever – 14 journalists, media assistants and a blogger killed for their work and dozens injured, kidnapped and intimidated, reveals an annual media trends monitoring and analysis report issued by Freedom Network, Pakistan.

The report, “State of Media in Pakistan: Key Trends of 2014 and Main Challenges in 2015,” says 2014 came to be characterized by a number of troubling developments in the realm of electronic media when laws came to be used formally to browbeat and censure it for the first time, including convicting media houses for treason and blasphemy and punishing them coercively with bans and fines.

Freedom Network Managing Director Aurangzaib Khan said, “For several years now, Pakistan has consistently figured as the most dangerous of countries for journalists when it comes to the debate around freedom of expression internationally. A lot needs to be done to reduce the risk to human rights defenders, journalists and development practitioners in Pakistan to make defending human rights and practicing journalism safer professions. This report is part of the effort to monitor, protect and advocate for an enabling environment for development and media practitioners.”

The report looks in detail at the relentless challenges the growing Pakistani news media continues to face investigating how the dominant TV news channels are facing a crisis of credibility for growing compromises on ethics. The report also investigates how 2014 came to be the deadliest year ever for Pakistani media for its shockingly high number of fatal casualties.

Each of the nine key media issues discussed by a separate expert on the subject ranging from seasoned journalists, dealing with these issues on a daily basis, to activists who keep a close eye on media developments – each suggesting changes and reforms needed to promote greater media professionalism.

Freedom Network was established as an independent initiative to establish a platform for civil society, including media, dedicated to providing research, analysis, guidance, technical assistance, resources, education and training so that human rights defenders, development practitioners and media stakeholders can promote greater professionalism and more effectively protect freedom of expression for both citizens and media.

In her article on digital challenges to media in Pakistan, Nighat Daad noted this disturbing trend: “The previous regimes in Pakistan preferred a behind-the-scene approach for controlling internet freedom but the [current] regime in its first 18 months in office has been vocal in the Parliament and on media for using strong measures to censor social media.”

Phyza Jameel, a media and development activist, researcher and analyst, throws light on the fast emerging social media scene in Pakistan by saying “In practice, in 2014 in Pakistan blogging and citizen journalism have been trying to emerge as a parallel form of media, bringing activism and accountability to the existing information mechanisms.”