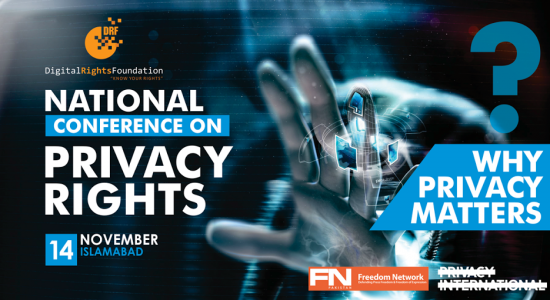 How big the problem of digital surveillance is in Pakistan? Fairly alarming if the views expressed by citizens and experts during the first National Conference on Privacy Rights is anything to go by.

As the first event of its kind expanding the post-Snowden digital security debate to Pakistan, participants agreed that “anonymity is becoming a scarcity online now”.

Pakistan is “Customer #32” of the notorious FinFisher, a spyware marketed to enable governments to fight crime but increasingly used to snoop on citizens, including activists, journalists, bloggers and politicians. Most recently, governments in Bahrain and Ethiopia have allegedly used the software for unlawful surveillance of human rights campaigners.

The conference held in Islamabad on November 14, 2014 was organized by the Digital Rights Foundation in collaboration with Freedom Network and Privacy International.

“For the younger people it has sinister dimensions as they increasingly live their lives online,” said Fouad Bajwa, a public policy analyst who specializes in internet rights and governance. “It is hopeless. I recently had to find a solution (legislation, protection) to protect a woman attacked on online. But the laws and attitudes encourage punishment before protection – punishment is primary, protection rights are treated as secondary.”

Governments, said Adnan Rehmat, a media analyst associated with International Media Support, are essentially public animals, not private while the public are private. “Governments are suspicious and therefore intermediaries that process information for the public such as journalists and bloggers become vulnerable,” he said. They are followed, have to contend with fake accounts, attacked, and harassed as the case of The News investigative reporter Umar Cheema, one of the panelists, illustrated. Cheema, who has won several awards for courage in journalism, was abducted and beaten by a group of assailants that hacked into his mail box, saying he was out to malign the government with his reporting.

There are no specific laws on handling data, and governments do ask Internet Service Providers for it, so the responsibility to stay safe lies with the user, the discussants noted. But when it comes to activism, even feminist workers are declared as ‘enemy of the state’ because they speak about human rights and that, in the government views, maligns its image internationally. “In my previous life as a child rights activist, I took up a case of rape of a minor girl in the Khyber Pakhtunkhwa province”, said Bushra Gohar, a member of the Awami National Party. “I was told I am working against national interest!”

Fouad Bajwa said that 3 to 6 months of all data is recorded in Pakistan by the authorities and kept to “develop evidence”, to map out the movement and intent of criminals and terrorists. “What about ordinary civilians then, because surveillance is happing on everybody?” he asked. “We didn’t have this in Pakistan. Foreign companies came in and gave the ideas to the state.”

He said there was the need to incorporate human rights concerns and obligations into the cybercrime laws and policies. “Privacy online (a citizen’s concern) vs crime online (the state’s concern): How can we establish the balance, between policing and privacy.”

“The time was right to talk about how the government was intruding into people’s lives, acquiring information without their knowledge. We are trying to initiate a debate on privacy”, said Nighat Dad, Executive Director, DRF.

In the last one decade, apart from bring in the 3G and 4G technology for mobile communication, there hasn’t been any policy design mechanism established or decisions taken to look into online consumer protection.

Pakistan shares biometric data on citizens with the US National Security Agency (NSA). “The security standards and how safe the data is, cannot be commented upon with certainty”, said a panelist. “Your identity is the primary information in your privacy context. Post 9/11 the passport, the cross border movement tracking, the ID card system are all fitted into a chip with your credit card and back information.”

Ben Wagner, Director of the Centre for Internet and Human Rights, said unlicensed exports of surveillance software were going up whereas that of licensed going down.

“We are enabling not just NSA, but hundreds of smaller ‘NSAs’, through software are enabling governments to snoop on citizens”, he said. “It is all political and that is why the governments do it. In Ethiopia and Bahrain activists have been under surveillance and put in jails. There needs to a move away from spying to human security.”

He said the UN report on human rights also speaks of digital security. “Few people know this but a Pakistani woman, Shaista Ikramullah (author of Purdah to Parliament) was on the UN team that drafted the Universal Human Rights Declaration.”

The session on legislation on privacy presented a white paper on surveillance laws and practices in Pakistan, asked questions about the role and limit of law on digital surveillance: is privacy the first right to die post World War II? How do we pressurize the legislatures to improve the law through influence, discourse, persuasion and numbers?

Waqqas Mir, a Lahore based lawyer, who has authored the paper said in 1948, post-World War II, privacy was recognized as right in the wake of the Nazi state’s intrusion into citizen privacy in Germany.

“Pakistan recognized the right for the first time in the 1973 Constitution”, he said. “The right to privacy is absolute but surveillance cannot be stopped and we have seen it being done to the German Chancellor. We have to link the issue of surveillance to attack on the freedom of expression. There are ways to strengthen the right to privacy – advocacy to let people know about digital security and rights and litigation – the Fair Trial Act, investigation into how the law is used and misused.”

The session, that was widely lauded by the participants for the learning it offered, talked about the Pakistani laws – more recently the Fair Trial Act and the Anti-Terrorism Act- dissecting them for the intrusion they allowed into privacy rights of citizens.

“The surveillance laws have strengthened the Deep State – no one is exempted from it”, said panelist Afrasiab Khattak, a Senator of the Awami National Party who chairs the Senate Functional Committee on Human Rights.

“The most protective struggle is awareness”, he said. “Many people know the dark side of the law and how it affects human rights. The civil society has to be prepared for a long struggle particularly because the entire region in the midst of a terrible security problem and the state will always resort to the security argument. We need to have networks, platforms, alliances between civil society and the parliament and politicians to reverse these.”

“The Pakistan parliament is a case of retarded development – it started late, has had ruptures”, he said. “We need to build capacity of the parliamentarians on issues. The Right to Information is now a fundamental right after the 18th Amendment, and provinces are legislating but we should know that we are a security state but when I ask someone to upload the minutes of the meeting of the functional committee on HR on the government website, I am told we can’t. People think you are a security threat when you ask questions. There are no answers, no support even for parliamentarians. The oversight role of the parliament needs to be strengthened as well.”

The author is civil and media rights activist, journalist, researcher and trainer. He also currently heads Freedom Network. He may be reached at: aurangzaibkhan@gmail.com

🇦🇫🇵🇰 #Afghanistan: @RSF_inter and its partner Freedom Network (@pressfreedompk) sent a letter to #Pakistan's prime minister @ImranKhanPTI asking him to facilitate the arrival and transit of journalists fleeing #Taliban terror. This is a matter of global and shared responsibility! pic.twitter.com/Bs0R…

#journalists state sit-in against ⁦@GovtofPakistan⁩’s proposed #PMDA today outside #Parliament vowing to resist the “draconian legislation” at all costs. pic.twitter.com/AXs2…

⁦@RSF_inter⁩ & ⁦@pressfreedompk⁩ join #media stakeholders united to oppose #PMDA which is regarded as “new headquarters of #censorship” if parliament passes it. #MediaUnited pic.twitter.com/1b1O…

Alone in #Peshawar, 262 #journalists lost jobs since @PTIofficial took power in 2018, a meeting of #media stakeholders discussing #PMDA important act on #FreeSpeech in the country held by @pressfreedompk