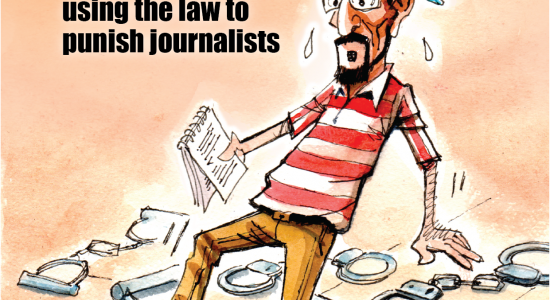 International Day to End Impunity for Crimes Against Journalists – Nov 2, 2020

ISLAMABAD: The state of Pakistan has emerged as the single largest predator of journalists when it comes to filing legal cases against them for their journalism work while the legal system of the country is failing to provide justice to journalists in defending themselves against the impunity of this legal onslaught.

These are among several startling findings of a new research study conducted by Freedom Network, a Pakistani media rights watchdog advocating for protection of civil liberties of citizens and journalists, including freedom of expression, right to information and digital rights.

“It is alarming that the state functionaries of various government departments have emerged as the main initiators of the cases, indicating adoption of a predatorial attitude of the state of Pakistan against journalists and becoming their enemy number when it comes to lodging legal cases against them,” said Iqbal Khattak, the executive director of Freedom Network while launching the report.

“This state of affairs is alarming and the state needs to both explain itself why it is attacking media and its practitioners as an undeclared but practiced policy and it needs to rapidly de-escalate its targeting of media as a key element of Pakistan’s democratic landscape,” he added.

The study says there were several legal cases registered against journalists in the year 2020 also but these were also not included in the research dataset to allow for at least one year to lapse after registration of cases against them to track the legal justice process of registration, investigation, prosecution and trial to determine whether the legal system of Pakistan allows for a robust combating of impunity of crimes against journalists as they defended themselves.

The key findings of this research on impunity of persecutors filing cases against journalists in Pakistan based on an exhaustive Impunity Index developed by Freedom Network include the following:

Journalists targeted by medium: Journalists in Pakistan working for print media are the most risk to legal cases against them; print media practitioners are twice as likely to be the target of legal action than television media.

The most dangerous actors targeting journalists: The state and its functionaries have emerged as the biggest legal threat to journalists in Pakistan with 15 of 17 cases (88.2%) registered by them while law enforcement agencies such as Police and FIA are the single largest (41.1%) type of actor registering legal cases against journalists.

Instruments of legal entanglement: Over two-thirds of all journalists that face legal cases, FIRs are registered against them; the rest receive either formal legal notices or court summons.

Legal cases leading to court cases: In only two-thirds of the cases the investigation process by the police was completed and allowed to proceed to court for trial while in one-third cases even the challan was not completed.

Conclusion of trial in courts: Trials in an overall majority of cases (nearly 60%) never reached conclusion – leaving most journalists without a chance to prove themselves innocent.

Outcome of concluded trials – guilty or innocent: In the few cases where the trial was concluded, the accused journalists were declared innocent and acquitted. However, in overall terms most cases – 10 out of 7, or over 60% – never reached a court or conclusion of trial and, therefore, most of the journalists facing legal cases in 2018-19 never got justice until end-October 2020 till the production of this research study.