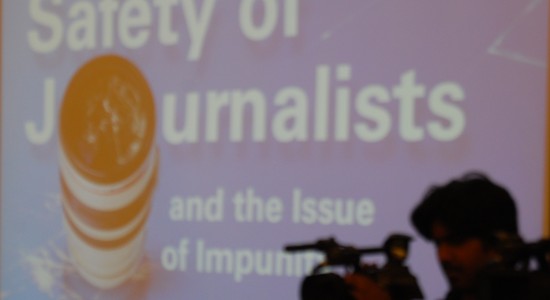 Pakistan’s Federal Minister for Information and Broadcasting Pervaiz Rasheed has announced that a special meeting of key media stakeholders will be convened with Baluchistan Chief Minister Dr Abdul Malik Baluch to discuss security threats to media in the violence-hit province where four journalists have died in different circumstances in 2013 alone.

“The Government, Provincial Government and members of the National Coalition on Media Safety [NCOMS] will have a separate meeting on Baluchistan in Quetta,” Minister Rasheed said at the inaugural meeting of the Steering Committee of NCOMS in Islamabad on 8 October 2013 after several journalists brought the dangerous situation the media is facing in Baluchistan was brought to the minister’s notice.

The correspondent of Baluch-language Vsh News channel in Islamabad was the first to seek the minister’s attention to the Baluchistan situation saying journalists are under attack from all sides. As he finished, senior journalists Hamid Mir and Mazhar Abbas threw more light on the media situation in Baluchistan saying the federal government’s immediate intervention is required to control the situation before it goes completely out of control. They also named some militant organizations threatening and attacking journalists.

“Let’s have a meeting with the Baluchistan chief minister and express public support on behalf of the federal and provincial governments, as well as relevant stakeholders such as [NCOMS] to express solidarity with the media and work for safer environments for them to work,” the federal minister informally told the journalists after the meeting.

Minister Rasheed is a member of the Pakistan Muslim League-N, which leads the ruling coalition at both the federal and Balochistan levels.

Journalists in Quetta and other cities say they are under attack from all sides as the security agencies, the judiciary and the insurgent groups and pro-government private militias have been threatening the free media to stop it from working independently.