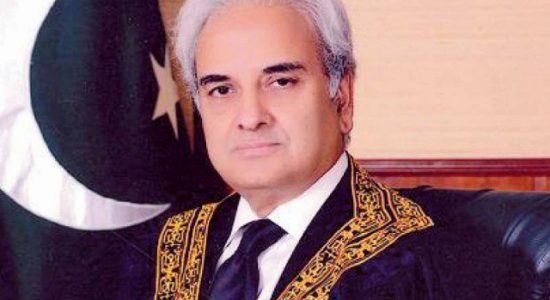 PARIS, July 2: Reporters Without Borders (RSF) and its local partner in Pakistan, Freedom Network (FN), sent a joint letter to caretaker Prime Minister Nasirul Mulk on 25 June, exactly one month ahead of Pakistan’s general election, calling on the authorities to allow journalists to cover the campaign freely.

Censorship and intimidation of the media are incompatible with democracy, the letter said in essence, voicing deep concern about the increase in abuses against journalists that has had a grave impact on the proper conduct of the election campaign.

The letter said: “What with threats, abductions, beatings, illegal suspensions and disrupted distribution, media and journalists are being harassed by the military and intelligence services, as well by political actors, in a clear attempt to intimidate them and prevent independent reporting ahead of the elections.”

Marvi Sirmed, a journalist who has often criticized the military establishment’s interference in civilian life, discovered on 21 June that there had been a break-in at her Islamabad home. Only her laptops, other electronic devices and her passport were taken, suggesting that the aim was to get access to her files and online personal information and to obstruct her work.

Gul Bukhari, a journalist known for her anti-military views, was on her way to participate in a TV broadcast in Lahore on 5 June when she was abducted and detained for several hours. A few hours later the same day, and just a few kilometres away, investigative journalist and BOL News anchor Asad Kharal was brutally assaulted by masked men.

At a press conference the previous day, Maj.-Gen. Asif Ghafoor, the spokesperson for Pakistan’s military, accused a number of journalists of circulating “anti-state and anti-military propaganda.”

When cable TV operators stopped carrying the Geo TV network’s channels, including Geo News, in much of Pakistan in April, this act of censorship was said to have been ordered by the military because Geo TV had given airtime to Nawaz Sharif, who was removed as prime minister by the Supreme Court in July 2017.

A few weeks later, distribution of the English-language daily Dawn, began being disrupted in much of the country after it published an interview with Sharif in which he criticised the military’s excessive power and meddling in public affairs.

“We have been seeing an alarming increase in violations of press freedom and the circulation of news and information in recent months,” said Daniel Bastard, the head of RSF’s Asia-Pacific desk.

“This interference is absolutely unacceptable in a country that claims to be democratic. We call on Pakistan’s civilian and military authorities to let journalists work freely and inform the public without threats or reprisals. The respect of Pakistan’s leaders for their fellow citizens and the country’s international credibility are both at issue.”

Freedom Network executive director Iqbal Khattak added: “The Pakistani people must be fully able to exercise their constitutional right to elect a new government on 25 July. Caretaker Prime Minister Nasirul Mulk and Chief Justice Mian Saqib Nisar have publicly stated that they will ensure free and fair elections, for which a free and independent press is essential. The election results will have no credibility if journalists are not allowed to cover the election without hindrance, pressure or manipulation of any kind.”

RSF distributes a regularly-updated Handbook for Journalists during Elections with specific, detailed answers to the many issues involved in all aspects of elections coverage.