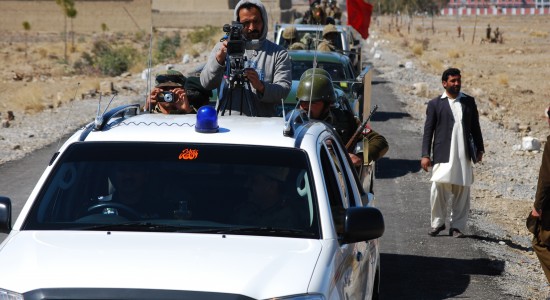 Media in Pakistan entered 2014 under the old threat to journalists’ lives. Caught in bloody crossfire between blind state power and extremist terror, journalism has always been a tightrope walk in Pakistan. Media by default is part of this war for being the sole platform to showcase the bloody drama in newspaper columns and on the airwaves.

Last year was one of the bloodiest for journalists with Committee to Protect Journalists (CPJ) reporting 70 deaths from across the world. In Pakistan seven journalists died in 2013 while a journalist is among four media workers killed so far in 2014. These journalists fell victim to barbarity of terror outfits and allegedly some state agencies.

The killers never gave reasons for their savagery. But media has often noted the displeasure of state machinery and non-state actors alike with some journalists. With no life insurance for reporters operating in conflict regions, each death is ascribed to the ‘will of God’.

Not a single killer of journalists has been brought to justice over the last decade.  Their families suffer as their media houses and the state usually leave them to the dogs. Their misery continues today and may unfortunately continue in the future for the same reasons.

Media houses and journalist organizations have issued stock condemnations at each death, doing little concrete to prevent them in the first place. Many often ask the million-dollar question: can journalists be saved from such tragedies? There may not be a perfect answer, for little has changed on the ground and in the state’s ability to protect media from the wrath of angry men.

But journalists on their own can do much for their personal and their families’ safety. The biggest deterrence being professional preparation to do the most difficult job – reporting from hell to cover the cruelest terrorists, less tolerant state and deal with their own largely insensitive media bosses.

Editors’ practice of pushing their correspondents in harms way for ‘breaking news’ from terrorism-afflicted regions, and lack of professional training are two major factors contributing to threats to journalists’ lives. These mostly poorly trained correspondents have over the years become eyes and ears for the world to view the ugly face of terrorism in Pakistan, which has killed over 40,000 people over the last decade.

Since the official deregulation of airwaves in 2002, the flip side of Pakistan’s impressive media expansion has been the compromised journalistic ethics in the cutthroat competition among burgeoning media outlets. Sensationalism at the cost of professionalism creates unsafe working conditions for journalists, making some reporters look more like activists. No brainer, we see more instances of professional activism for special interests than activism for professionalism.

Chances of inaccurate reporting are naturally high in such environment. Reporting becomes more challenging for the less-trained correspondents from terrorism-infested regions with complicated ground realities. Much of the reporting about these regions is poorly sourced and weak on facts. Retaliation from reactionary elements whose only business is to inflict pain should not be surprising. And in some cases because of these fears, reporters switch sides for their and their families’ safety, making them even more vulnerable.

Not just that, the media covers much of FATA (the lawless tribal belt bordering Afghanistan) through proxy reporting. A reporter’s FATA origin is considered the biggest plus by media houses. The practice makes sense because of media’s limited access to the much of FATA, declared out of bound for Pakistani and foreign press. It obviously kills the chances of independent professional reporting.

Does it mean the current practice should continue and more reporters pushed in harms way or the media houses should just stop carrying their correspondents’ reports and start publishing whatever comes out of the state and terrorists’ media machines?

None of the above is an ideal option. Rather the reporters should be prepared for conflict reporting both in terms of training and personal wellbeing. Even though some media houses offer life insurance to their high profiled correspondents, not every one operating from FATA, Khyber Pakhtunkhwa and Balochistan enjoys such protection. According to available data, over 90 percent of all the journalists killed in 2013 belonged to ethnic minorities — Pashtuns and Baloch.

Similarly, a handful of nonprofits and some journalism schools offer conflict reporting training but that may not be enough for an ever-expanding media landscape with over 18,000 journalists. Such trainings are largely limited to reporters based in urban centers. Trainings for correspondents based in FATA and remote districts of the provinces are a rare occurrence.

Years of neglect by journalist organizations, media houses and nonprofits have left these correspondents at the mercy of their editors who may care less for their personal security in the mad race for scoops. These stakeholders can do a much better job by promoting such an information ecosystem that delivers more professionally done stories.

Training comes handy in the creation of such ecosystem. It may not guarantee 100 percent safety of reporters, but it may reduce the number of threats to their lives. Intelligent use of information is not just a trait. It’s a craft that earns journalists credibility and may deter those wishing them harm.

Life insurance to reporters operating in conflict zones should be the other key step made mandatory for all media houses by the state, which may add its two cents by subsidizing it.

Pakistani media has done a heroic job in telling the world the country’s painful realities, sometimes even in its crudest form. Fifty-three journalists lost their lives in attacks in Pakistan since 1992. Fears of more reporters losing their lives are more real in 2014 than they were in 1992. State’s responsibility of ensuring their protection notwithstanding, the best future of Pakistani journalism is in professionalism, which comes with training, grooming and responsibility. Is the media ready to defend its professionalism, the best guarantor of journalists’ safety and media’s independence? Media may have little option here.

Caption: A TV journalist is onboard a paramilitary Pakistani force’s jeep in South Waziristan during 2011 embedded trip.