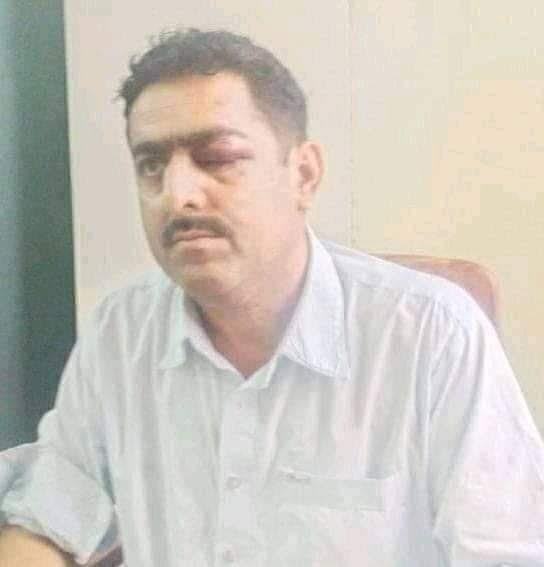 TORTURED: Mashriq newspaper reporter Ahmed Nawaz Raan in Rajanpur district in southern Punjab province faced serious consequences for reporting alleged embezzlement in development funds allegedly by personal assistant of PTI MNA Sardar Jaffar Khan Leghari as the journalist was meted out “third-degree torture” during detention in Jampur Police Station in Rajanpur district in south Punjab province. “I was tortured at the police station,” Ahmed Nawaz told Freedom Network. The personal assistant, Qasim Langrana, told Freedom Network that he lodged an FIR against the journalist after he ran the report in Mashriq newspaper. “The reporter was arrested” after he talked to police officials, Qasim Langrana said. The journalist was presented before a local panchayat, dispute resolution body, as “criminal.” The journalist said: “I had no option but to seek apology under pressure.” After “dispute settlement,” all cases against the journalist were withdrawn. “Qasim Langrana is very powerful man. I submitted an application to Punjab Police chief for investigation into Rajanpur Police torture on me. But there has been no response to my application,” the journalist said. “I am still waiting for justice.” The journalist shared some photos with torture signs on his body and bruises on his left eye.

OFFLINE HARASSMENT: Police stopped journalists from covering search operation by law-enforcement personnel in Qazi Ahmed area in Nawabshah district in Sindh province on 05 June 2021. “When I started recording the operation police asked me to switch off camera. When I refused, they started beating me up,” journalist Ghulam Haider of Sindhi-language Mehran TV channel told Freedom Network. The journalist community demanded action against cops for stopping them from carrying out professional work.

On 27 June 2021, reporter Samin Nawaz of 24 News channel was stopped from covering at vaccination centre at Expo Centre in Karachi. She told Freedom Network: “Dr Anila and her guards stopped us from the coverage torturing me and my cameraman and locked us down in a cubicle,” Samin Nawaz said.

VERBAL THREAT: Online news agency chief editor Mohsin Jamil Baig said some “government people” threatened him for criticizing the government policies on 12 June 2021. “They threatened to arrest me or leave the country,” the senior journalist was quoted as saying. The threats followed his appearance on Samaa News channel’s show “Sawal.”

LEGAL CASE: On orders of Anti-Terrorist Court, Mirpurkhas police called Umer Kot journalist Ali Murad, who works for Sindhi-language Pahanji newspaper, to appear in the court on 24 June 2021 after he ran a report on Health Department on 02 June 2021. The report accused the Health Department of using personal warehouse of a clerk to store official motorcycles and other items. The clerk, Shuja Memon, after the report publication lodged a report against Ali Murad and some other journalists accusing them of “torturing” and “robbing” him of Rs.10,000. The journalists deny the allegations. The journalists moved the Sindh High Court for bail before arrest and the apex court accepted their applications on 03 June 2021 directing the ATC regarding its jurisdiction. False cases and intimidation through police against journalists in urban Sindh have become a norm to discourage journalism, according to local journalists.

In three out of eight cases state actors were suspected of being involved while in four cases non-state actors while in one case threat actor was unknown.