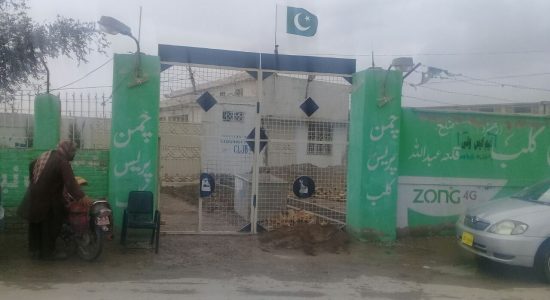 Journalists in Balochistan are facing multiple threats – be it in Baloch or Pashtoon areas. Freedom of expression has become scarce and threats to information practioners’ lives have increased. Many known and unknown banned militants’ organizations, political and religious parties continue to threaten print and electronic media workers.

There has not been much spotlight on dangers journalists face in Pashtoon belt of Balochistan. They are as threatened as journalists in Baloch areas and they work under as much as duress as journalists elsewhere in the province.

A senior journalist Syed Zahir Ali Shah says ”journalists working in the Pashtoon dominated areas of the Baluchistan, right from Zhob to Quetta, and from Quetta to Chaman all are in the line of fire. But the dynamics and the level of the threats vary from area to area. In Zhob there is one threat, in Hernai its different and at the same time in Chaman the nature is different from Ziarat.”

There are twelve districts in Pashtoon belt of Baluchistan. Two are highly sensitive – Chaman and Zhob. They are regarded as “hubs” of religious and pro-Taliban supporter groups. Chaman is a border town which serves as one of the major crossing points with Afghanistan.

“In Chaman, local journalists find their work extremely difficult while reporting on border issues and political parties,” Akhter Gulfam, president of Chaman Press Club informs adding that “I along with my cameraman Aminullah Mengal have been beaten up by security personnel during the reporting of Pakistan and Afghanistan border clash on May 5, 2017. They even snatched our camera and mobile phones.”

Hr further elaborates that “Drugs mafias, smugglers and tribal system in Pashtoon belt are also hindering independent and professional journalism. That is why freedom of expression is not possible here.”

Musakhail is one of the most backward districts of Balochistan. Local journalist Khalil Musakhail works for various news channels and as a reporter for Pashto-language Khyber News channel. He says: “In Musakhail, we are facing tribal issues, people don’t know responsibilities of journalists. Sometimes when we report or publish news, the tribal elders take the news as if it was against them. So, we have been threatened several times.”

”Secondly, In case of publishing or reporting on real issues the district is facing, journalists come under pressure, threatened many times by political, religious and tribal groups,” Musakhail says.

Along with political parties there are religious groups creating hurdles for local and regional journalists in Balochistan. These journalists are fearful for their lives, and hence many in Pashtoon areas keep weapons for self-defence.

Killa Saifullah is another district which has a strong tribal system. “Apart from political parties and threatening journalists, tribal elite, Khans, Sardars or Nawabs also create hurdles for us. They want news of their own choice. If we go against their will then they became dangerous,” Rafay Kakar, a correspondent of daily Jang newspaper, tells Freedom Network.

More than 40 journalists have been attacked and killed in Balochistan in the last one decade. The problem is culprits are not arrested.

Raza-ur-Rehman, president Press Club Quetta talking exclusively to the Freedom Network, says ”Journalists in Balochistan are unsafe everywhere, whether they belong to Pashtoon or Baloch belt or in Quetta. They have always been in trouble due to the insurgency. Militant organizations exert huge pressure too.”

There are more than 11 press clubs in Pashtoon belt, but they lack buildings and resources. Even working journalists are not paid by the media houses. Districts have no printing facilities so most of the newspapers are printed only in Quetta.

In rural areas of Balochistan journalists’ problems further compound due to lack of resources and tensions. There is the insurance for a camera, microphone and other equipment but there is no guarantee of working journalist’s life. Many working journalists are even deprived of appointment letters.

The Balochistan government is blamed for failing to provide security to the journalists. This is basically the responsibility of the government to resolve journalists’ problems as soon as possible.