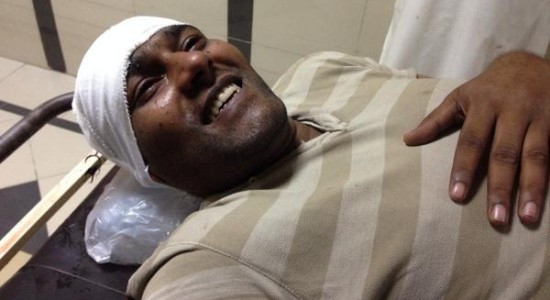 The ongoing clashes between police and anti-government protesters in the capital Islamabad is a cause of concern for civil society including media rights organisations such as Freedom Network [FN]. A number of private news channel crews, including technical and non-technical support staff, have been thrashed by police and demonstrators both in front of live cameras.

Most of the news channels reporting the clashes live – Dunya, ARY, Samaa, Dawn and Geo Tez – have reported violence against their crew. Fortunately, all injuries are reportedly non-fatal to mostly reporters and cameramen.

Angry protestors surrounded the main office of Geo News channel, a few hundred metres from the site of the clashes throwing stones at its office building and parked cars. The attackers also harassed the channel staff trapped inside. Window panes were smashed and damaged to cars. There are no reports whether any staff member was injured during this attack or not. Geo says their DSNG van was attacked near D Square allegedly by Pakistan Awami Tehrik workers.

Pressure on media increases as political tension goes on

Dunya News channel broadcast a video showing a group of people in police uniform forcefully opening door of its DSNG van and dragging a crew member out and beating him badly. FN condemns such acts and seeks government’s action against the people involved in such attacks.

ARY News channel has shown two crew members sitting close to a tree with apparent signs of injuries. A broken camera was lying next to them.

“I was standing on the sidelines, filming the protesters being beaten up when I heard the cry ‘media walan nu maro’ (beat the media people),” Samaa cameraman Khurram Fayyaz told Dawn News channel.

Dawn newspaper reported that Khurram was one of the first to be attacked. He recounted how, after an initial scuffle that saw his camera broken, he managed to escape in the direction of DSNG vans parked near D-Chowk.

“I took refuge in a Dunya TV van, but the driver refused to help and the pursuing policemen caught up with me. They pulled me out of the van and let me have it,” he said as he showed his back, which was black and blue with baton marks.

The newspaper said Khurram’s head was also bashed in and he was bleeding profusely as he was brought to Pims. He suffered a concussion and needed eight stitches to close the wound.

Samaa TV’s Ajab Khan was also attacked in the melee early on Saturday morning. He was shifted to the Polyclinic hospital, Dawn report added. When Dawn tried to reach him, a close friend answered his cellphone and said Ajab had been shifted to Shifa Hospital for a CT scan of his skull, which was badly injured.

Over half a dozen DawnNews cameramen and reporters were also targeted by the police in their high-handed rampage against mediapersons. Hasnain Raza, Assignment Editor at DawnNews’ Islamabad desk, said cameraman Kashif Abbasi’s arm was broken; Noshad Abbasi was baton charged and also received injuries from teargas shells that hit him directly, while reporters Yasir Malik and Samar Abbas were also affected by tear gas.

“Ishfaque Hussain, who had been called in from the Peshawar bureau, was hit with plastic pellets and rubber bullets, while cameramen Imran Chaudhry and Mansoor Ahmed were also assaulted while covering police brutality against PTI and PAT supporters,” he said.

Express News’ Amir Alam, who was carrying his injured cameraman Majid Shah with one arm and flashing his press card with the other, was also attacked.

“The police just pelted us with stones,” he said. He was then beaten severely with batons and received injuries to the head, knee and hands. Express News cameraman Usman Afzal and driver Bakht Zameen were also hurt in clashes with police on Sunday.

Aaj TV’s Rana Tariq was lucky to escape following a near-deadly dose of teargas. But his fellow cameramen Haroon Khurshid and Ghulam Ali were not so lucky. They were surrounded by police and severely beaten as well.

Most of these mediapersons were rushed to the Pakistan Institute of Medical Sciences on Sunday morning. Tahir Imran, a journalist who was at Pims when mediapersons were first brought to the hospital, offered some hope.

“One of the cameramen, Noshad, told me that he was rescued by an official of the Islamabad police, who pleaded with the men beating him to stop.”

Similarly, Dawn News also reported that its crew was subjected to mal-treatment during the course of performing their professional duties.

“This concerted violence targeting media by all sides – law-enforcing personnel and protesters – speaks of deliberate attempts to silence critical media. We condemn both sides for resorting to violence against the media,” FN said 31 August 2014 (Sunday) in its press freedom alert.

“We urge both sides to respect freedom of press and freedom of expression and let the media perform its professional job in a professional manner without fear of violence,” the alert said.

FN supports Pakistan Federal Union of Journalists’ call for protest against the violence targeting the media personnel but advises media houses to respect journalism ethics too.

It said situation was being monitored and detailed report would follow as details are received.