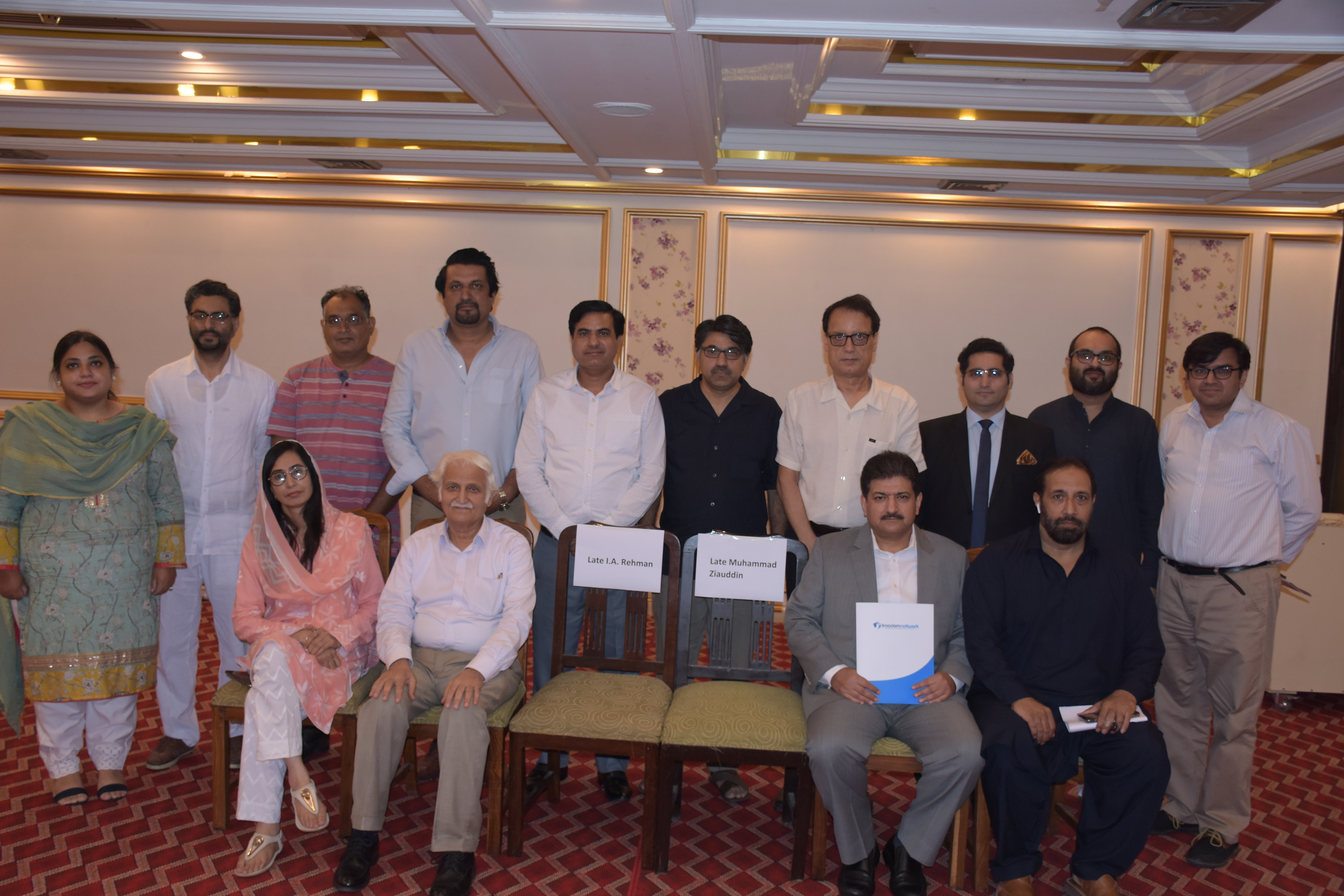 ISLAMABAD, 22 August 2022: The Pakistan Journalists Safety Coalition (PJSC) has declared the Protection of Journalists and Media Professionals Act 2021 passed by the previous Imran Khan government as fundamentally flawed in some respects and demanded Prime Minister Shahbaz Sharif to amend the law to make it optimally beneficial to stakeholders.

This unanimous demand was made by a meeting of PJSC, which groups together representative associations of media workers, senior journalists, human rights commissions, digital rights groups, women journalists’ groups and political parties in a meeting in Islamabad, a press release issued here on Monday, August 22, 2022, said. The PJSC has been at the forefront of efforts in recent years in the advocacy for special safety protection laws for journalists and media workers at the federal level and in the provinces.

The meeting of the federal chapter of the PJSC said that Section 6 of the law mandates proof of “good faith” before it can benefit journalists is akin to a prequalification clause, which is anathematic to press freedom and principles of lawmaking. Journalists, media bodies and civil society have been demanding removal of this clause.

The PJSC also expressed serious concern at how the law was “gender blind” in terms of its failure to mandate a minimum number of women to the proposed Safety Commission that is to be set up under the law and demanded that an amendment should mandate at least 25 per cent members of the commission be women to make it a progressive law.

“We unanimously demand the Shahbaz Sharif government to make these amendments on an urgent basis to convert what is a law good in intent but bad in draft, and hence misplaced in functionality, so that journalists can benefit from the law,” the statement said.

The PJSC reminded that the law was passed by the current parliament in late 2021 with unanimous support of Pakistan Muslim League-N, Pakistan People’s Party, Pakistan Tehrik-e-Insaf and other parties but Section 20 was maliciously sneaked into the draft by the previous government rendering it practically redundant.

“We urge the Shahbaz Sharif government to remove this mal-intent clause aimed at sabotaging the ability of journalists and media workers to benefit from the law,” adding that it was welcome that Federal Information Minister Mariyam Aurangzaib had also promised to revise the law in accordance with the wishes of the jorunalists’ community.

The PJSC also demanded that while the procedure of amending the law can be launched, the government must urgently, on a parallel track, establish the Safety Commission so that the law can be operationalized.

“The Imran Khan government enacted the law but did not operationalize it, thereby rendering it functionally redundant. The Shahbaz Sharif government should operationalize the law immediately to allow the journalists to benefit from it,” the meeting demanded.

The PJSC also urged the government to be consultative rather than secretive in the process, urging Prime Minister Shahbaz Sharif to share a panel of three names for chairperson of the Safety Commission, which must include at least one woman.

The PJSC meeting, which was facilitated by Pakistani media rights watchdog Freedom Network, took stock of the state of media freedoms and safety of journalists and expressed concern at the various actions and incidents against media practitioners which are hurting both freedom of expression and public interest journalism.

One minute of silence was observed to pay homage to two legendary journalists and founding members of PJSC – late I A Rehman and late Muhammad Ziauddin – who championed the cause of journalists’ safety and protection. The meeting unanimously elected Hamid Mir as its chairperson after the demise of its founding chair Muhammad Ziauddin.