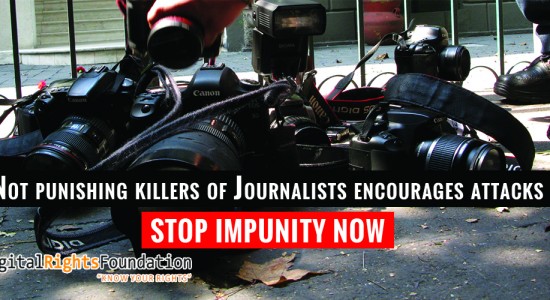 On the eve of November 2, the International UN Day to End Impunity for Crimes against Journalists, first of all, let us greet you on you and your government’s efforts for ensuring freedom of expression for all in the country. But we think we need to seek your kind attention to a very serious issue afflicting the media practitioners in Pakistan. This is related to safety of working journalists thus ensuring the fundamental right of freedom of expression.

The key characteristic about all these journalists killed is that except for one – Wali Khan Babar of Geo TV – the killers of no other Pakistani journalists killed have been identified and punished. This lack of justice and failures by successive governments to find, prosecute and punish the killers has promoted impunity. This impunity – exemption from punishment – has emboldened the forces opposed to the public watchdog role of media and democracy itself to continue persecuting and executing journalists.

Since your government took power in 2013, the attacks on journalists continue. Prominent TV anchor Hamid Mir of Geo TV survived a life attempt in Karachi in March 2014 but Irshad Mastoi, the bureau chief of Online news agency in Quetta, was not that fortunate. He was killed on August 28, 2014.

Journalists working in rural and tribal areas are most at risk, particularly those working in the Federally Administrated Tribal Agencies (FATA), Khyber Pakhtunkhwa and Balochistan, who are exposed to stress and danger from security agencies, militant groups, district administration and tribal leaders. In the FATA, for example, four journalists were killed in 2013. None of their attackers have been identified and punished.

Pakistan has widespread impunity, whereby political factions, militant groups and security forces are among the actors that threaten journalists and media workers in Pakistan. There is a climate of fear and intimidation among journalists that is growing.

We would like to highlight some slackness in the present system that encourages violence against journalists. First, there is a lack of government will to investigate murders thoroughly and prosecute those responsible. In 2014, UNESCO requested information on the status of the judicial inquiries for 43 cases since 2006. The Pakistani government provided information on only 15 of those cases. Not one has led to a conviction. Another is the weakness of criminal justice system, leaving it vulnerable to political pressure.

By adopting Resolution 1738 on 23 December 2006, the United Nations Security Council emphasized the duty of UN member states to combat impunity for crimes against journalists. In a resolution passed on 18 December 2013, the UN General Assembly reminded member states of their obligation to deploy whatever means are necessary to bring those responsible for these crimes to justice.

Your Excellency, we think you and your government have the requisite commitment and the confidence to start bringing to an end to this impunity by taking the following urgently needed steps:

Your Excellency, the Pakistan Muslim League-N government should make sure all state institutions uphold the fundamental right of freedom of expression, which ensures that citizens are well informed and able to actively participate in society. It should aim to create a free and safe environment for journalists and media workers, including social media producers, in two ways: by building partnerships among all stakeholders to introduce and harmonize mechanisms designed to reduce the danger – both in conflict and non-conflict situations – and by strengthening the legal mechanisms available nationally, regionally and globally, that support the right to freedom of expression and information, and supporting governments with their implementation.

We at Freedom Network, a Pakistani platform dedicated to advocating freedom of expression of all citizens and promoting an enabling environment for journalists and human rights defenders, extend all our support to your government’s endeavors in this regard.