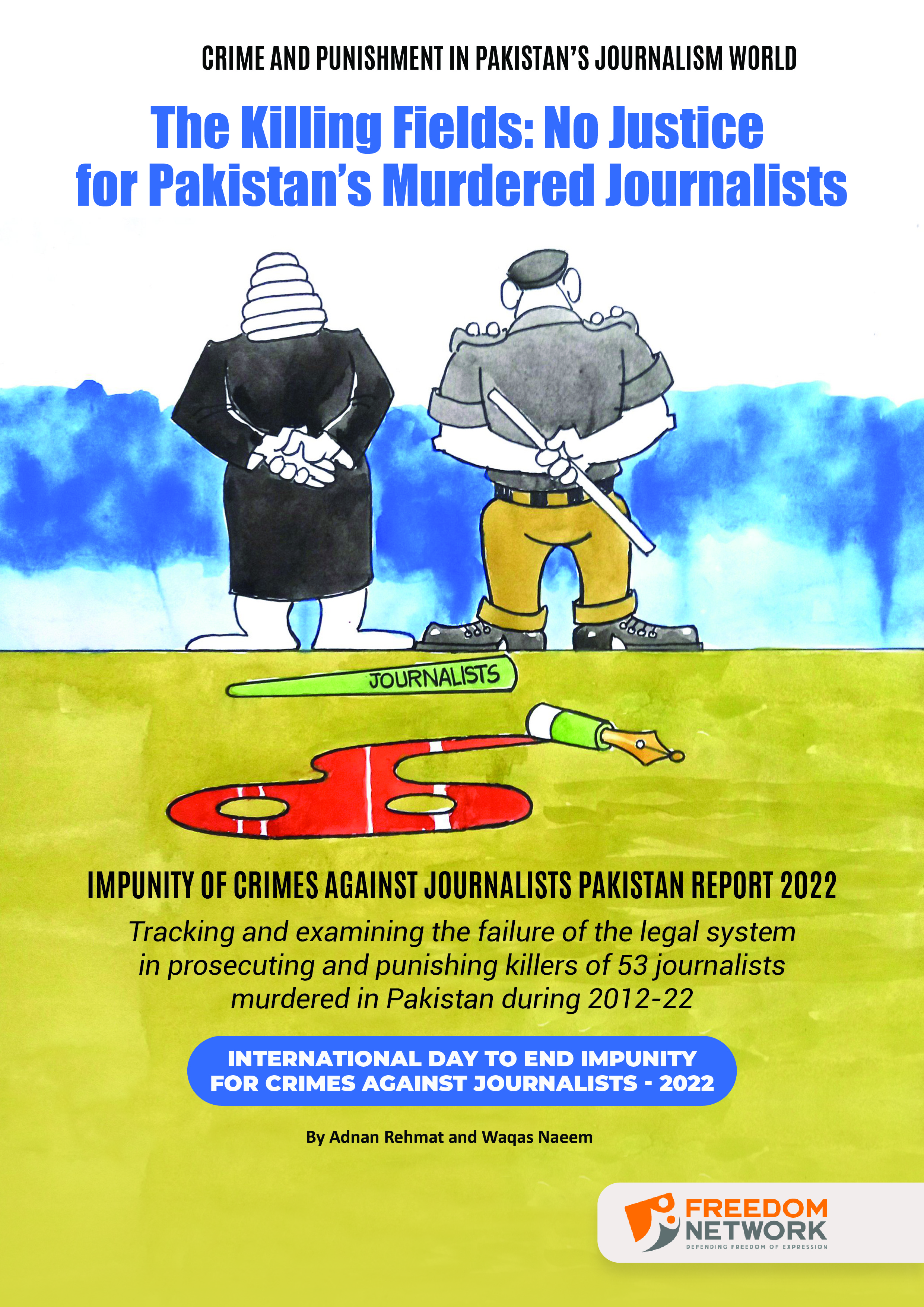 No Convictions in 96% of Journalist Killings in Pakistan: Freedom Network Report

The report titled “The Killing Fields: No Justice for Pakistan’s Murdered Journalists” was launched ahead of the International Day to End Impunity for Crimes against Journalists, which falls on 2 November.

The Freedom Network research is framed in the context of the 10-year anniversary of the 2012 United Nations Plan of Action on the Safety of Journalists and the Issue of Impunity, which Pakistan had first endorsed in October 2013 and later committed to implementing in the federal Protection of Journalists and Media Professionals Act, 2021.

According to the report, 53 Pakistani journalists were killed in the country between 2012 and 2022 but the perpetrators were convicted in only two out of these 53 murder cases. In the remaining 96% of the cases, the criminal justice system hopelessly failed to deliver justice for the slain journalists and their bereaved families.

“This open-ended impunity for crimes against journalists and media in Pakistan is taking an ugliest shape and latest killing of under-threat journalist Arshad Sharif in Kenya reminds us how stronger perpetrators of crime and press freedom predators are getting,” Iqbal Khattak, Executive Director of Freedom Network, reacted to the report findings.

The report states that “due to poor investigation, the police fail to produce challans in many cases, killing the chances of justice at an early stage of the legal system” and “due to the poor quality of prosecution, most cases never complete the trial process in the courts”.

Khattak said the report’s findings indicate that even though Pakistan legislated exclusively on the safety of journalists at the federal level and in the Sindh province, the Pakistani journalists remain unsafe.

“Ending impunity for crimes against journalists, especially in the murder of journalists, is the litmus test for Pakistan’s recently enacted journalist safety laws,” Khattak said. “Not only do the federal and Sindh journalist protection laws need to be operationalized urgently but also Balochistan, Khyber Pakhtunkhwa and Punjab need to pass their own provincial laws on safety for journalists and other media workers so that the high levels of impunity of crimes can be countered.”

The report is based on data collected from the families of the journalists killed as well as from their news colleagues, local press clubs and unions of journalists, based on a detailed Impunity Index developed by Freedom Network.

The report examines whether or not the murdered journalists and their bereaved families received any justice, and if not, then why is the legal system in Pakistan failing these journalists, why is the level of impunity enjoyed by their killers so high, and who is to blame for failing to act on threats reported by the journalists before they were murdered.

The key findings of the research, which covers the period from January 2012 to July 2022, include:

Worst enemies of journalists: Unidentified persons constituted the biggest suspected threat actor to journalists in Pakistan during 2012-2022, with 15 of the 53 journalists (or 28%) murdered in the reporting period being targeted by them, according to the family members or colleagues of the victims. Organized crime and militant groups were the second and third most suspected perpetrators of journalist killings, respectively. In two separate cases, two women journalists were allegedly murdered by their husbands after they reportedly refused to quit journalism.

Deadly inaction: According to available data, more than half of the journalists apparently did not inform their media employers, press club, union or local authorities about any threats. Less than 10% of all journalists who received death threats before being murdered informed their media employers, press club, union or the local authorities. Even in cases where advance warning was available, the system and relevant stakeholders were unable to prevent murders. These were all preventable deaths.

Dead on whose behalf? Risk ownership: In over two-thirds of the cases, the process of invoking the legal system was left to bereaved families, making the matter of seeking justice a private family affair. The media organizations or employers, on whose behalf the journalists had assumed safety risks, never became party to the process of getting justice for the killed journalists.

Incomplete trial – court failures: Less than half of the murder cases of journalists investigated by the police reached the court and were declared fit for trial, which indicates that for every second journalist murdered the race for justice ends at this early stage.

Near zero punishment – justice failures: For nearly all journalists murdered (51, or 96% of the total 53), the criminal justice system hopelessly failed to deliver when either FIRs were not registered, police investigations were not completed, cases were not declared fit for trial, trials were not completed, or alleged killers were not convicted or punished. The killers of only two of the 53 journalists murdered in the period 2012-2022 were convicted by courts – 4% of the total murders.