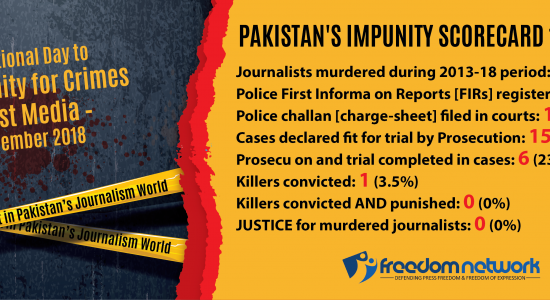 ISLAMABAD, August 8, 2019: A new initiative has been launched to facilitate establishment of a collaborative national safety mechanism to combat impunity of crimes against journalists and strengthening a prevention, prosecution and protection regime for media practitioners in Pakistan, including online journalism practitioners.

The Pakistan Journalists Safety Coalition (PJSC) was established in Islamabad on August 7, 2019 with the aim of becoming the leading national platform advocating for a national agenda on safety of journalists and other media workers and strengthening freedom of expression and free media in Pakistan in line with UN Sustainable Development Goal #16 and the UN Plan of Action Against Impunity and Issues of Safety.

“Measures need to be coordinated, endorsed and adopted by key stakeholders of the media sector in Pakistan, including media owners, media managers, media practitioners and workers, to reduce the range of threats that journalists, media workers and media houses in Pakistan face,” Iqbal Khattak, Executive Director of national media watchdog organization Freedom Network, said during foundation meeting of the PJSC in Islamabad on Wednesday, according to a press release issued on Thursday.

He told the meeting: “The threats facing Pakistani media and its practitioners is unacceptable that have, according to Freedom Network and Pakistan Federal Union of Journalists, killed over 120 journalists since 2000 and resulted in injuries, assaults, arrests, kidnapping and other forms of serious intimidation faced by hundreds of other journalists and media workers.”

The foundation meeting, facilitated by Freedom Network, approved a decentralized structure for PJSC, which will be operationalized through a steering committee and facilitate five chapters – four provincial and one for Islamabad. The local chapters will lead local advocacy efforts with provincial governments, provincial legislatures and other provincial stakeholders, including media, civil society and academia.

The efforts of the local chapters, as well as the Steering Committee will be to facilitate local solutions to combating impunity of crimes against journalists, including through lobbying for provincial laws on journalists’ safety and other administrative mechanisms to enact prevention, prosecution and protection measures for journalists.

The meeting approved and endorsed scope of work for the PJSC Steering Committee which include working  towards establishing a national mechanism on safety of journalists, media workers and media groups; lobby, engage and mobilize key stakeholders of the media sector to become partners in combating impunity against journalists and media houses; engage and lobby support for the national mechanism on media safety and PJSC from the state, including the national and provincial legislatures, federal and provincial governments and their relevant ministries and departments; as well as well as the security agencies, the lawyers’ community, the judiciary and the civil society, to combat impunity against journalists.