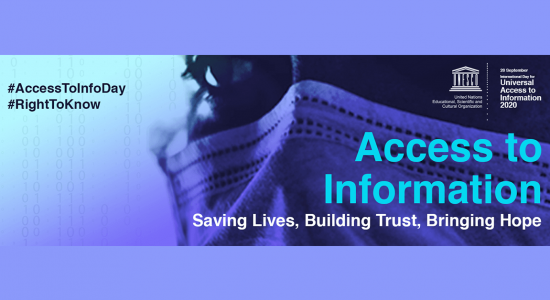 International Day for Universal Access to Information (IDUAI) on 28 September

ISLAMABAD: September 25, 2020: The federal cabinet of Prime Minister Imran Khan did not discuss the issue of journalists’ safety and impunity for crimes against media in its first 62 meetings held between September 1, 2018 and January 30, 2020, even though in the same period seven  journalists and one blogger were killed, six abducted, 15 slapped with legal cases and a total of 135 violations against media practitioners were documented.

Coming on the heels of the International Day for Universal Access to Information, observed globally, including Pakistan, on September 28, this information has been officially confirmed by the federal government in response to a request for information filed under the Federal Right of Access to Information Act, 2017, filed by Freedom Network, an Islamabad-based media rights watchdog.

The request had been filed with the Cabinet Division in February 2020 to seek official information on how many times the issue of growing number of murders, attacks and intimidation of journalists was taken up by the cabinet.

The Cabinet Division shared details only on August 26, 2020 only after the filer moved the Federal Information Commission to appeal under Section 17 of the Right of Access to lnformation Act, 2017, against non-provision of desired information within the stipulated time under the act.

“[A total of] 62 meetings of the [Federal] Cabinet were held during the period of 01 September 2018 to 30 January 2020. The subject [issues of safety of journalists and impunity of crimes against media] was not on the agenda during the time-interval under discussion,” the Cabinet Division’s Section Officer Jamil Ahmed officially communicated through the Federal Information Commission.

“It is alarming that the highest governance forum in the country – the federal cabinet of ministers – remained oblivious to the aggravated levels of violence against journalists and other information practitioners, including murders and attacks, and did not even bother to discuss the matter once in 62 meetings,” Iqbal Khattak, the Executive Director of Freedom Network, said on Friday in a press statement issued here.

“This official disregard to violence against media and its practitioners is a direct contributory to the high levels of impunity that attackers and intimidators enjoy in Pakistan, putting the country in the list of top 10 most dangerous places in the world to practice journalism, according to international media watchdogs,” he added.

Khattak said as long as Pakistan did not commit itself in practical terms to protecting journalists and fighting impunity, the country will continue to fail to implement the United Nations Sustainable Development Goal (SDG) #16.10, which seeks to guarantee access to information and safety and security of journalists and other information practitioners.

“Pakistan must not fail in achieving the SGD 16.10 goal it has so robustly committed to,” the Freedom Network executive director said, urging Prime Minister Imran Khan to urgently materialize his promise made in a tweet in April 2020 to soon table a bill on safety of journalists and other information practitioners that the federal government has already drafted but kept pending for a long time now.

The UN Plan of Action on the Safety of Journalists and Issues of Impunity was endorsed and approved by the government of Nawaz Sharif when then minister for information and broadcasting Pervez Rashid was part of the Plan’s launch in Islamabad in October 2013. This plan includes a commitment to introduce a special law on safety of journalists.

Over 130 journalists have been killed and more than 2,000 attacked, injured, arrested, kidnapped or intimidated since year 2000 in Pakistan, according to detailed investigations and documentation maintained by Freedom Network.