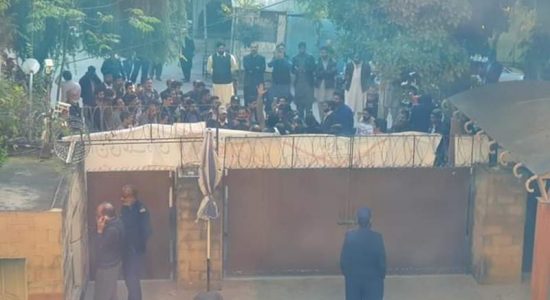 ISLAMABAD, 04 December 2019: National media watchdog organization Freedom Network is alarmed at the nature of protest against senior Dawn management including its well-respected editor Zaffar Abbas and the sustained pace of seemingly manipulated campaign against one of Pakistan’s best newspapers, founded by Quaid-e-Azam Muhammad Ali Jinnah, who also founded Pakistan.

One of the most dangerous allegations that can be made against individuals in Pakistan are charges of treason and being involved in anti-state scheming, both of which are now being made against Zaffar Abbas and senior-most management figure Hameed Haroon.

“This is a dangerous trend that have put the lives of both Haroon and Abbas in danger and deserve swift action from the highest levels of the government to ensure that they are not hurt.

“Mysterious crowds besieging the office of Dawn in Islamabad and a rally in Karachi addressed by firebrand clerics alleging Haroon and Abbas of being traitors are a dangerous trend and must be condemned by the authorities to distance themselves from suspicions of undeclared support for such incendiary attacks on Dawn and its journalists,” Freedom Network said 04 December 2019 in its Press Freedom Alert to express concern over Tuesday evening suspicious protest outside main gate of Dawn offices in Islamabad.

“Media is the fourth pillar of the State and one of the primary responsibilities of the government and State is to defend press freedoms. The renewed attacks on Dawn which seem to have been orchestrated from somewhere, need to be halted immediately and safety of Dawn, founded by Jinnah, and its journalists, including editors and management, need to be ensured by the government,” it demanded.

A mob numbering around two dozens of young people held an unannounced protest outside the main gate of Dawn newspaper’s offices in Islamabad on 02 December 2019 agitating why the country’s most credible paper referred to “London Bridge attacker” to as “Pakistani origin.”

The mob chanting anti-Dawn slogans, remained outside the Dawn offices for almost three hours besieging the newspaper’s bureau in the federal capital with making the staff hostage.

The mob prevented the employees from entering or leaving the building and demanded a written apology. Some of the protesters also misbehaved with the newspaper as well as Dawn News TV channel’s employees when they arrived at the office.”

The unknown protestors expressed anguish over the newspaper’s coverage of ‘London Bridge Attack” when a British national killed three civilians in London before police could shoot and kill him.

Anti-Dawn protest followed tweets from the ruling Pakistan Tehreek-e-Insaf leaders and ministers who appeared unhappy with the newspaper’s headline linking the attacker’s ethnicity with Pakistan.

Federal Minister for Science and Technonlgy Chaudhry Fawad Hussain tweeted: “Dawn walas please have some mercy on this Nation, shocked on your cheap attempt to link a British terroist to Pakistan, Anwar Al Awlaki and Anjem ch both are brit origin nothing to do with Kashmir or Pak, Britain should handle its problem within—irresponsible n cheap attitude.”

Federal Minister for Human Rights Dr Shireen Mazari also accused Dawn newspaper of “having agenda.” She, however, did not explain her allegation.