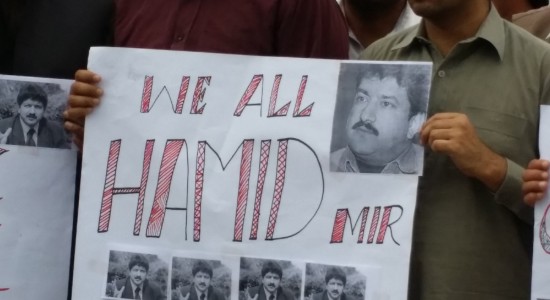 The space is shrinking for independent journalism in Pakistan because of continuous violence against journalists by militants and state agencies. The attack on Hamid Mir, Pakistan’s most respected journalist, proves this again. Mir survived an assassination attempt in Karachi on April 19, 2014. An unidentified gunman targeted him as he traveled from the airport to the office of Geo News, the TV channel on which he hosts his popular political current affairs show Capital Talk. He received multiple bullet wounds and required a long surgery to stabilize.

Mir is the second Pakistani journalist who has survived an assassination attempt in three weeks. On March 28, 2014 Raza Rumi, a blogger and a television anchor for Express News channel, was attacked in Lahore in which his driver was killed and guard injured. These journalists were targeted apparently because the powerful, in a country where violence has worked in favor of those who perpetrate and perpetuate it, did not like their views on a range of issues including militancy and security policies.

Rumi was attacked because of his independent views that confronted the extremist ideology of terrorists and promoted human rights. Mir’s fiercely independent style of journalism pricked many in Pakistan’s powerful security establishment as well as Taliban extremists. Many believe he was attacked because the military was unhappy with his coverage of the scores of families whose loved ones have disappeared and who accuse the intelligence agencies of kidnapping them. Human rights groups put the number of missing persons into hundreds if not thousands. A majority of missing persons are from Balochistan, the insurgency-hit southwestern province. Pakistani media speculated that Mir’s anti-Musharraf rhetoric must also have displeased some powerful people. This was the second attempt on Mir’s life. In 2012, the Taliban tried to kill him by planting explosives under his car outside his home in Islamabad.

Mir’s family has blamed Lieutenant General Zaheerul Islam, the director general of the intelligence agency ISI, responsible for the attack. Amir Mir, himself a journalist and younger brother of Hamid, told Geo News on live TV barely an hour after the attack that his brother had informed him, his parent organization and even the New York-based Committee to Protect Journalists that he faced threats to his life from ISI’s chief and a few others in the agency.

It was a rare sight to see the photo of a serving general splashing on television screens for reasons as bad as being involved in conspiracy to murder. The country’s military, which controls the ISI, was swift in its reaction and rejection. A spokesman while condemning the incident called for an independent investigation and deplored allegations against the ISI. “…raising allegations against ISI or head of ISI without any basis is highly regrettable and misleading,” a spokesman for Inter Services Press Relations, the media arm of the military, said in a statement hours after the incident.

The government of Prime Minister Nawaz Sharif, which has seen somewhat frosty relations with the military in recent weeks, especially over the trial of former military ruler Pervez Musharraf and emergence of anti-military remarks of Defense Minister Khwaja Asif, which he delivered in 2006 in parliament, kept an initial mum except for a stock condemnation. But later media reported that Sharif has convened a meeting to review the situation arising out of attack on Mir’s life.

Journalism has become Pakistan’s most dangerous profession largely because of the state’s failure to protect media persons from the wrath of religious and political extremists, criminals, the police and intelligence agencies. When the state repeatedly fails to protect free speech, it is either incompetent or conniving. The history of violence against Pakistani media suggests that it is combination of the two, making it more lethal and toxic.

Pakistani Federal Union of Journalists (PFUJ), the country’s largest journalists’ union, says 110 journalists have lost their lives in line of duty over the past decades. PFUJ president Afzal Butt says killers of only one journalist, Wali Khan Babar, have been sentenced. Omar Sheikh, a British-Pakistani convicted of killing American journalist Daniel Pearl, is also serving life-term in a Pakistani jail. Killers of none of the scores of other journalists have ever been brought to justice.

In fact many of the investigations, like the ones in the cases of Saleem Shehzad, Musa Khankhel and Hayatullah Khan, were either never made public or failed to identify killers. In none of the cases the intelligence agencies came out clean despite being seen as prime suspect. Critics call these investigations as cover-ups since none explicitly identified the killers and brought them to justice.

This systemic or deliberate failure of the state and its agencies to punish the killers has perpetually kept them in the dock. It’s less surprising that people draw their own conclusions after official investigations are either shelved or are inconclusive.

In case of Hamid Mir too while the developments were dramatic and the blame game may sound too premature, yet the intelligence agencies, especially the ISI, cannot absolve themselves. The agency, after the unprecedented allegations against it and its chief, may have little choice but to come clean out of this serious dent to its reputation. And the best way to come out clean may be by tracking the attackers and uncovering the plot, even if it involves the black sheep within its own rank and file. It certainly has the resources to do it. All that remain to be tested is its will to do so.

The Pakistani government must appoint a high-level independent inquiry commission to investigate the incident by maintaining complete transparency. The commission’s report must be made public and the perpetrators identified and punished. But to many that may seem hope against the hope. Reasons abound. Pakistan has an unimpressive record of catching those involved in violence against the country’s fledging media. But if this history of cover-ups and whitewashes is repeated once more, its so-called state actors stand to lose more than anyone else. And the Sharif government will certainly have its share of the shame, for constitutionally the intelligence agencies come under its control.

PESHAWAR: Journalists hold a placard on Sunday outside Peshawar Press Club while protesting attack on Hamid Mir in Karachi on April 19.

#ISLAMABAD: “The latest attack on ⁦@asmashirazi⁩ manifests this government’s increasing disbelief in press freedom in the country and warrants a serious reprimand to stop it from completely taking journalism out of Pakistan.” fnpk.org/pm-khans-go…

#FreedomNetwork is taken aback by online harassment of @asmashirazi through ruling party’s @Twitter account. We hope @ImranKhanPTI will honour his commitment to upholding #PressFreedom #journalismisnotacrime

DIGITAL PAKISTAN MONITOR report by #FreedomNetwork for September 2021 is out fnpk.org/digital-pak…

PAKISTAN MEDIA MONITOR report by #FreedomNetwork for September 2021 is out fnpk.org/pakistan-me…

Latest threat data report by #FreedomNetwork for September 2021 is out. Unique ways to extract info from journalists fnpk.org/journalists…

Journalist #ShahidZehri is killed in bomb blast in Hub district of #Balochistan #FreedomNetwork condemns murder of journalist and demands @jam_kamal to bring perpetrators of this heinous crime to #justice #JournalismIsNotACrime pic.twitter.com/REFO…

JOB OPPORTUNITIES In reference to Freedom Network advertisement placed on Facebook and Twitter on 8 October 2021, please click the link given below to read ToRs and qualification required for the stated positions Freedom Network created for its short-term project. twitter.com/pressfre…