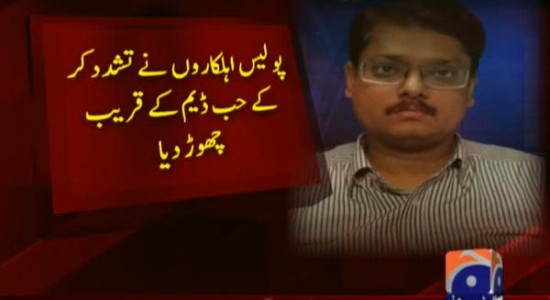 The journalist and police accounts say four suspects travelling in a vehicle kidnapped the Geo News bureau chief as he left his home within the jurisdiction of Shahra-e-Noorjehan in his car on Link Road, said Karachi-West police chief Feroze Shah.

“The kidnapping of Fahim Siddiqui is reminder of the threat journalists in general and Geo News staff in particular face in Karachi and elsewhere in the country since the attack on Hamdi Mir in April last year,” Freedom Network [FN], Pakistan’s first media watchdog organization, said Monday [July 27, 2015] in a press freedom alert.

It adds: “A thorough investigation should take place to disprove the notion that rogue elements within the law-enforcement agencies may have taken away the journalist to send him and others a message.”

Siddiqui is the second journalist to have been picked up after Zafar Karimi who was detained for 40 hours by Rangers on June 30 last.

“We hope the Sindh government will bring perpetrators of the crime to justice,” FN press freedom alert hoped.

No group has claimed responsibility for the incident.

Siddiqui was hosting programme ‘FIR’ covering the world of crimes before being elevated to the position of bureau chief. His kidnapping followed assassination attempt on Geo News anchor Hamid Mir in Karachi in April last year.

While speaking to Geo TV, Siddiqui said the suspects wore police uniforms and a civilian dress.

“They intercepted me and subjected me to torture after identification,” claimed the bureau chief of the channel. “They took me in their car and left me near Hub Dam in Manghopir.”

The kidnappers used ‘abusive language’ against Geo News channel and its bureau chief, he went on to give eyewitness account of what happened to him. They also put a piece of cloth on his mouth. He further claimed they took away his mobile phone, a licensed pistol and other valuables.

Police official Feroze Shah confirmed three of kidnappers wore police uniforms while the fourth man was in a civilian dress.

Siddiqui told colleagues he could identify the people involved in his kidnapping.

The kidnappers also snatched Siddiqui’s mobile phone and his licensed pistol, the police official went on to add.

“They subjected him to ‘slight torture’ before dumping him in Manghopir,” the DIG was quoted as saying in media reports.

He said the suspects were not travelling in a police mobile and that they were not ‘policemen’ according to an initial probe into the incident.

He said it was an ‘unfortunate incident’ and police had launched an investigation.

SSP Central Muqaddas Haider, who is conducting probe into the incident, told Dawn newspaper that Fahim Siddiqui in his statement before the police stated that there were five kidnappers — four of them wore in police uniforms — and “they were travelling in ‘light blue colour’ police van.”

SSP Haider clarified that this type of police van was no more being used by the police.

He said the journalist stated that some of the suspects were travelling in Toyota Corolla car. They intercepted him and forcibly took him out of his car.

“The kidnappers covered his (journalist) face with a piece of cloth and left him near a filter plant in Manghopir area after driving around the city streets for 25 minutes,” the police official went on to add.

“They also slapped him,” said the senior police officer, adding, “they also abandoned his car but took away its keys.”

The senior journalist told the police he had not received any such threats from anyone, according to SSP Haider. He said an FIR was lodged about the kidnapping and torture case.