Before reaching The Second Floor – T2F – I was somehow unwilling to travel through some of the more dangerous routes while leaving the sprawling Arabian Sea Resort outside Karachi for a discussion on journalists’ safety and ethical behavior – issues close to my heart – that Ms Sabeen Mahmud had arranged to host.

Considering its formidable – and richly deserved – reputation, if you’re visiting T2F for the first time you may be in for a surprise. That’s what happened to me.  It is small place and cannot host many attendees. Stepping out of the vehicle that our host Ms Shabana Arif of Rozan organization had arranged us to reach the venue for the discussion after locking us in The Arabian Sea resort for the previous three days discussing the state of ethical journalism in Pakistan, I found the participation in the T2F discussion in November 2013 thoroughly engaging after I stepped into the T2F venue and snuggled into my place. 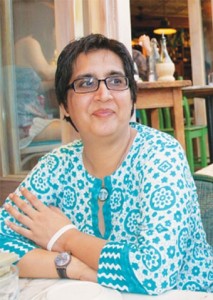 Once inside T2F, on the way to the discussion corner, you will find interesting things to glance at. The most eye-catching is the space for books. Media comrade Adnan Rehmat loves places like this. It was difficult to force him out of the book corner despite the fact that he was the one scheduled to moderate the discussion we were all attending. Sabeen was tasked with prying Adnan away from the books and into his moderator’s chair as the discussion room had filled to capacity.

Under the spotlight, six stainless steel chairs awaited the discussion panelists. Apart from media analyst Adnan as the moderator, the expert discussants included myself, reporters Hina Mahgul Rind and Riffat Aziz and Express Tribune editor Kamal Siddiqui. Before the moderator could begin proceedings, Sabeen Mahmud emerged from behind the sizeable audience to set the template for the discussion. Holding a wireless mike in her right hand she also gently set the rules for the game she believed in strongly – inclusivity, politeness and a sustained focus on the issues at hand.

Sabeen’s soft-yet-steely personality and an expert’s understanding of the media issues at hand impressed me. I now remember quietly thinking to myself she was speaking as if she had practiced journalism in difficult regions – such as myself in Khyber Pakhtunkhwa and Federally Administered Tribal Areas. I was later told she did not. And yet she seemed well versed with even the smaller details of the complex issues media faces in Pakistan.

Among the audience were both males and females, young and old. There were students of journalism and working journalists also. Several elderly types interested in how political and social narratives were shaping up in the media were there too, and notable. For me, it was the first such experience to an informal-formal setting where we were required to present our cases in a way that were both primary and advanced simultaneously so that everyone in the audience could benefit.

The discussion began in earnest, and responsible journalism, controversial TV rating systems and journalists’ safety came under review. TV journalists have one clear edge over print journalist and that is non-stop speech and audience response to narratives of a panelist, who happened to be TV journalist, of issues TV journalism faces received overwhelming response.

It all went good. Lots of animated conversations, explanations, analysis and overview.

The Local media, especially Express Tribune carried the discussion in detail in its next day’s edition. The audience was participatory and they wanted to ask even more questions than they already did (and there were several of them!) from the panelists. However, Sabeen finally intervened to say: “We will take last two questions. I am sorry to be rude, but we have to go by time.” People who value the importance of getting things started and concluded at pre-set schedule win my appreciation.

That experience at T2F was unforgettable and while Pakistan may have many platforms and places where the communities sit together to discuss issues in general, what Sabeen was doing at T2F was something we, the journalists at the press clubs and the unions – should be doing more frequently and in just as purposefully and organized a manner as she was. Sabeen’s way is how you promote tolerance and respect each other’s views and beliefs and, above all, employ critical thinking and come to mutually acceptable conclusions.

“Please free to let me know whenever you are in Karachi next time to arrange another discussion,” Sabeen Mahmud told us while personally seeing us off after the discussion. How was I to know this person – who immediately won our respect and affection with her professional demeanor – would be about 15 months be gunned down outside her beloved T2F after holding a similar debate on another important issue: Balochistan. How were we to know this was the last time some of us, including me, would see her?

It did not even occur to me that instead of being appreciated officially for her work at a time when her country and ours need the most she would be so vulnerable as to lose her life in April 2015 in the noble pursuit for understanding, tolerance and inclusivity.

Her murder clearly bears the hallmark of a classical case of an attack on freedom of expression. Her murder is the manifestation of the extreme form of censorship. Only a year earlier in March 2014 a similar attack was made to silence journalist Hamid Mir, who also hosted discussion on Balochistan in his ‘Capital Talk’ show on Geo News channel. He was lucky to survive the near-fatal attack when six bullets were pumped inside body. He is still doing journalism and perhaps may be the only journalist in the world practicing journalism with two bullets still inside his body.

While until it can be possibly proven who killed Sabeen it may not be prudent to blame anyone, some state institutions increasingly coming under suspicion need to proactively dispel these suspicions with evidence. The best way to do this, of course, would be to identify, nab, prosecute, convict and punish the killers of Sabeen. The battle against impunity cannot be won if the state fails to provide justice for brave citizens like Sabeen who are both the nation’s conscience as well its best citizens. Solving her murder and punishing her murderers is now also necessary to fight back impunity of crimes against freedom of expression in Pakistan.

The author is a senior journalist and press freedom, freedom of expression monitor, journalism capacity building and journalists’ safety and security consultant. He may be reached @khattak63