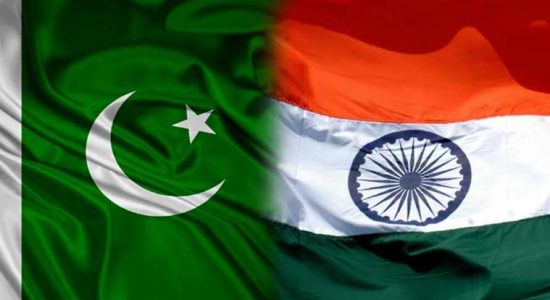 For many the media war between the two arch rivals India and Pakistan begins the moment a major terrorist attack takes place on the Indian soil. This has played out so many times, like a vicious circle. Ever since the advent of electronic media in Pakistan in 2001, the chances of the country’s military committing a limited Kargil-like intrusion has diminished. But the media in the two countries have taken the centre stage for a ‘war of words, taunts and slants.” The battles are now fought in our living rooms on our television screens. News readers and anchors on the Indian side yell at their best seeking revenge while here in Pakistan media gets into a swift gear to belittle neighbouring TV channels coverage as “propaganda and war mongering”.

Pakistan’s military did the hard talk on from this side. In a corps commanders conference on September 19, Army Chief General Raheel Sharif declared that his country was “fully prepared to respond to the entire spectrum of direct and indirect threats” from India. He was even more direct on September 23, vowing that the Army will defend “each and every inch” of the country “no matter what the cost.”

These verbal onslaughts aside, have we realized that ever since the arrival/growth of electronic media in the two countries, that they have not fought each other? The last ‘unannounced battle’ was Kargil in the 1999 – a year after the nuclear tests carried out by the two. There has been Red Fort attack in Delhi in December 2000, Indian parliament raid in December 2001, Mumbai massacre of 2008, Gurdaspur in 2015, Pathankot n 2016 and now the latest Uri. But for some fortunately odd reason we have not gone to the ugly extreme. This is not to say the urge is not there. Judging from the ever more hateful verbal bouts and rhetoric, it seems the two establishments have not lost much love for each other.

So is it because of lethal nuclear capabilities achieved in 1998 or perpetual wars fought on the media that the two countries have refrained from engaging militarily? Muhammad Amir Rana of Pakistan Institute for Peace Studies partially agrees. “Vibrant media is one of the contributing factors that we have not seen more wars,” he said.

India at the moment seems keen on utilising other options such as withdrawing MFN status, maximising use of shared river water and boycotting SAARC summit in Islamabad; though pressure from hard-line media is difficult to ignore. Both India and Pakistan know any new war would be manifold destructive and deadly.

Michael Kugelman, a senior programme associate for South Asia at the Woodrow Wilson International Center for Scholars in Washington, D.C., wrote in the Diplomat the main deterrent to a hot war on the subcontinent is nuclear weapons. “Pakistan refuses to adopt a no-first use policy, meaning that it could conceivably respond to India’s use of conventional military force with a nuclear strike. This means that for India, any substantive military action against Pakistan—and even modest uses of force such as targeted airstrikes—would be dangerously risky.” He thinks India could go for more covert operations inside Pakistan.

Many believe when full-fledged war is not an option, media can help give vent to pent up frustrations. Being aggrieved party, India can at least talk of war. But the flip side is too much war wrangling creates anxiety, disappointment and a sad world view as being chaotic. Typical use of melodrama creates sensationalism.

Lenin once said: “War is terrible, but it is terribly profitable…..’. This seems true for Indo-Pakistan media too. War or war-like situations provide material for improved ratings. Maybe this is the reason that more journalist focus on war than on peace. Media needs to deconstruct their war discourses for audiences to help understand the beauty of peace.

What the future holds for people of this region? Almost everyone knows that Indo-Pakistan constant tug of war is not going anywhere. In such an environment, isn’t it time the media in both countries be thinking of a code of conduct. With strong state controls and usage of the media for “national interest”, this seems highly unlikely. As usual the war mongers have side-lined peaceniks.