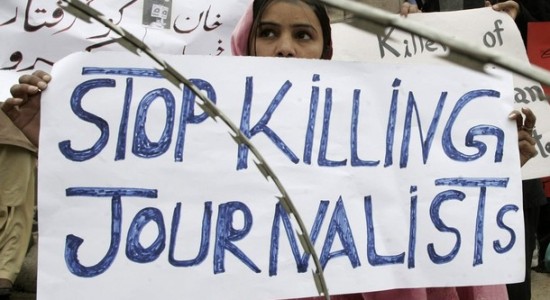 The Coalition on Media Safety (COMS) has demanded that federal and provincial governments to designate contact persons on violence against media so that media professionals, civil society organizations and concerned citizens may be able to get information on progress regarding specific cases of violence against media personnel.

The resolution was passed at the second meeting of the Steering Committee of COMS in Karachi on December 18, 2013, a press statement from the COMS Secretariat read on January 16.

Expressing dismay at the continued violent attacks on media organisations and professionals, the Steering Committee felt the appointment of special public prosecutor on violence against media would be helpful in putting pressure on the police for investigating and further processing cases of media attacks.

“COMS would then approach the provincial governments with details of what would be expected from governments for appointment of special public prosecutor on violence against media,” the statement went on to add.

During the meeting, the Steering Committee created a Working Group on Appointment of Special Prosecutor on Violence against Media and designated senior journalist Mazhar Abbas as the Chair of the working group.

The Steering Committee also agreed to assist media organizations develop safety protocols as they could be important in minimizing security threats. The meeting stressed the need for training of editors, owners, newsroom staff, reporters and district correspondents to sensitize them about the issue of safety.

The SC meeting asked the COMs secretariat to gather protocols that may have been developed by civil society and media organizations in Pakistan and internationally.  These protocols could be the basis of consultations to develop a framework for developing safety protocols by individual media Organisations.

The Steering Committee decided to establish a Working Group on Developing Safety Protocols for Media and unanimously agreed to appoint Mr. Mohammed Ziauddin, Executive Editor, Express Tribune as the chair.

The Steering Committee strongly condemned the attack on the offices of Express Media Group in Karachi and called for proper investigation of the incident so that the responsible can be brought to book. The meeting also demanded the government to provide proper security to all media houses and professionals.