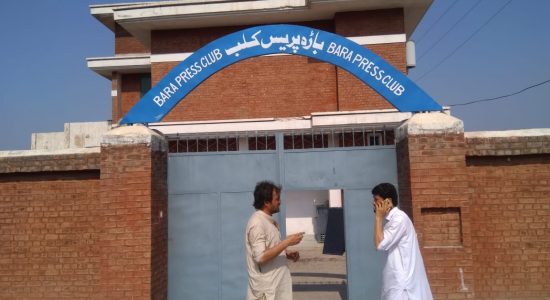 With the newly merged seven tribal districts still in transition after the passage of 25th Constitutional Amendment in May 2018, the local media is in a state of semi-stagnation. The erstwhile Fata Secretariat had established seven press clubs in different parts of tribal districts in early 2000, but most of these buildings are either still without the basic facilities like electricity, internet and even drinking water or lack facilities, considered essential for prompt and free flow of news to the media organizations.

Journalists in some tribal districts, especially in Orakzai, Khyber and South Waziristan have problems discharging their professional responsibilities and in free mobility. Currently at least four press clubs are established in rented buildings which include Darra Adam Khel in the Kohat Frontier Region, Landi Kotal in Khyber, Sadda in Kurram and Hangu district of Khyber Pakhtunkhwa. Journalists in Wana, South Waziristan are provided a single room facility by the local tribal police force (previously khasadar).

Journalists in Landi Kotal, Darra Adam Khel and Sadda say they find it very difficult to pay the rent of their press clubs on their own as the local administration had withdrawn financial assistance for the clubs after the tribal regions merger.

Saleh Din Orakzai, president of Orakzai Union of Journalists, says that though the administration in the Orakzai established a press club at Ghaljo area a year back but the building is still without basic facilities like electricity, internet, computer, laptops and clean drinking water.

He adds that all the local journalists are required to take prior permission from the security officials if they were to enter any part of Orakzai for coverage. “The importance of free media and access to information have increased many folds now that the internally displaced families have returned to the homes and they are faced with numerous problems which they want to highlight through media,” Mr. Saleh Din argues.

Zafar Wazir, a Wana-based journalist, says all news stories or television reports are censored by the intelligence agencies who keep a close vigil on their news reporting.

“The internet service and power supply provided to journalists in Wana are at the cost of cross checking of all news reports and stories by the intelligence agencies and thus none of us could dare to file an independent or an investigative story,” Mr. Wazir laments. The original building of Wana press club was destroyed by Taliban some 15 years back and could not be rebuilt despite repeated requests. “The government wants the media in tribal districts to be in cages so that the outside world is kept in the dark about the actual situation in South Waziristan in particular and rest of tribal districts in general,” he added.

The Mir Ali press club in North Waziristan which was build in 1998 and was considered to be the first-ever press club in any of the tribal regions, was also destroyed during the Zarb-e-Azb military exercises in 2015 and is still not repaired. Local journalists operate on their own while not having even a rented building.

The nearby press club in Miram Shah is comparatively well equipped and also well kept by local journalists. They however like their colleagues in other parts of tribal districts are also working under a ‘self imposed’ censorship as their activities are also monitored by the regional agencies.

Majority of the tribal journalists along with activists of political parties and civil societies believe that media role has increased many folds after the passage of 25th constitutional amendment. “Our primary task is to educate the local people about the complexities of the new administrative and judicial system along side apprising them about their legal and constitutional responsibilities,” Sudhir Ahmad, a senior journalist from Khyber says.

He adds that though a considerable number of tribal people are now using social media, but people still have faith and trust in the mainstream media and consider their reporting as more authentic and reliable in comparison to posts on social media by immature tribesmen.

He believes that the media in tribal districts could become more vibrant and proactive only when the local press clubs are well equipped, free of any external pressure or censorship and the journalist have free access to information with no restrictions on their mobility.

Saleh Din Orakzai is of the opinion that we can monitor the development projects, keep an eye on development funds and highlight social issues only when we have well established press clubs with uninterrupted power supply and internet service.

“At present we are seriously handicapped as we are not even able to pay the rent of the building from where we operate or cannot approach people who have grievances against the government institutions,” Mr. Orakzai adds.