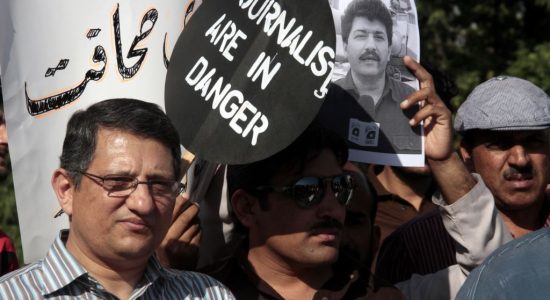 In the month of October 2016, a total of six cases of assault, detention and threats against journalists and media managers in Pakistan were documented by the Pakistan Press Clubs Safety Hubs Network and the media.

The most serious case this month involved the illegal arrest and detention of Khurram Gulzar, a reporter of Samaa TV who was picked up by security authorities, which he identified as the Rangers paramilitary force, on October 19, 2016 at 9.15 pm from outside his home. He was kept in detention for about an hour during which he was, according to the reporter, tortured by the Rangers personnel. Once a complaint was lodged with the authorities after Gulzar was released, the Rangers’ officials visited the reporter’s home, apologized for the whole affair and offered a bag of sweets to his family as a token of conciliation.

Two more serious cases this month included the assault on and injuries to two journalists, one each in Balochistan and Sindh. In the first instance, three unidentified persons attacked and injured known Muhibullah Tareen, a journalist based in Pishin district of Balochistan. One suspect was later arrested but the other two remain free.

Three cases of journalists being threatened verbally were also documented this month. These included the case of Karachi-based journalist Saeed Sarbazi who was threatened for his reporting of violence by unidentified members of what are known as Lyari Gangs in the most crime-infested part of the city. A case has been registered but there has been progress. In the second case, reporters Imran Aslam and Raja Mansoor of Royal TV and based in Islamabad were issued threats by land mafia after being angered by coverage of the Capital Development Authority’s campaign against land mafia to vacate illegally occupied government lands. The case was reported to police and the persons issuing the threats apologized to the reporters and the issue was resolved.

The overall data shows that Sindh was the worst affected region in terms of numbers of incidents in October 2016, with three of the six violations documented there and two in Islamabad and one in Balochistan. No fresh case was documented in by the Safety Hubs of the press clubs this month in Khyber Pakhtunkhwa, the Tribal Areas, Gilgit-Baltistan or Pakistan-administered Kashmir (AJK).

In the month of October 2016, no case of attack on media offices were documented by the Press Clubs Safety Hubs Network. There were also no known cases of written or verbal threats, formal ban or enforced censorship on a media house this month. No media house was served with a legal notice from either official quarters or from private parties.

In the month of October 2016, a total of six cases of attacks and threats against various types of media were documented by the Press Clubs Safety Hubs Network and the media. These included five cases of violations against television media and one against print media. No cases were documented against radio media, online media and other miscellaneous media.

Of the five cases against TV media, two included cases of verbal threats against reporters and one case each of a reporter being illegally detained and one of being injured. The single case against print media this month related to a verbal threat against a reporter. There was also a case of a journalists being harassed at his home when functionaries of security authorities illegally arrested a journalist and took him away for a while.

In the month of October 2016, the various reported or suspected threat actors attacking or threatening media included paramilitary security force Rangers, which illegally arrested a journalist from outside his home in Karachi and took him away and assaulted him. In another case land mafia threatened two journalists in Islamabad while criminal gang members threatened a journalist in Karachi. Attackers and harassers of other journalists remained unidentified.

A total of six cases of threats to journalists were reported to Safety Hubs in October 2016, including three in Karachi Press Club, two in national Press Club and one in Quetta Press Club. Of these, the Safety Hubs pursued three cases for redressal and resolution and managed to get resolution of all three. These included the case of a journalist in Karachi who was picked up by Rangers paramilitary force which later apologized to the reporter and made up with him after his case was taken up by the Karachi Press Club Safety Hub. The other two cases included the land mafia in Islamabad whose members threatened to hurt two reporters but who later apologized to the reporters and promised not to hurt them after the National Press Club pursued the case with the threatening party on behalf of the threatened reporters.

Some of the advocacy activities on journalists’ safety in October 2016 included the following: