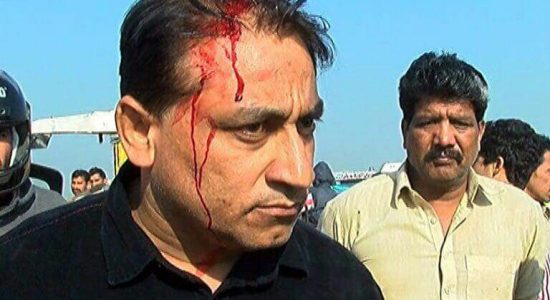 In February 2017, a total of 17 cases of serious violations against media and its practitioners were documented by the Pakistan Press Clubs Safety Hubs Network. These included one media worker murdered, one media worker arrested, six assaulted and injured, six threatened and one media worker against whom three cases were registered.

Among these cases, eight occurred in Punjab province, four in federal capital Islamabad, three in Sindh province and two in Balochistan province.

MURDER: The most serious case this month involved an attack on February 13, 2017 in Karachi, Sindh, on Taimur Khan, a cameraman for TV channel Samaa. He died of a bullet injury to his neck after being fired upon in what appeared to be a target attack. Khan was in an office vehicle when shot at close range and on his way to cover an attack on police in North Nazimabad neighborhood. Police has not been able to ascertain either the motive behind the murder or the identity of the attackers.

ARREST: Sajid Ali, a cameraman for TV channel Abtak, was arrested by the authorities on February 23, 2017, after the management lodged a case against him for allegedly leaking video footage of a TV program that investigates crime. The footage, which went viral on social media and generated controversial, seemed to indicate that the program producers were planting false evidence against a hostel manager. The arrest was made by the Cybercrime Wing of the Federal Investigation Agency (FIA) on a complaint filed by the channel management. He was released after a few hours of interrogation. The channel filed a second case of defamation against Ali at the Kalakot Police Station and a third case of theft of equipment against him at the Korangi Police Station.

ATTACKS & INJURIES: In the same month, six journalists and media workers were assaulted and injured.

In the second case, Samaa TV reporter Zain Uddin was beaten up by police on February 22, 2017 in Quetta, Balochistan, while on duty outside his office recording footage of a firing incident between two groups. The beating took place even after he identified himself as a journalist. The police later refused to register a case.

In the third case, Shafqat Imran, reporter for Channel 24 in Gujranwala, Punjab, was beaten up by officials of the Department of Solid Waste Management after he was caught filming them stealing fuel from official vehicles. He was recording footage for his new report. Imran sustained head injuries and required hospitalization.

In the first case, over 30 activists of sectarian group Sunni Ittehad Council held a noisy protest outside the offices of Geo News TV and Jang newspaper in Lahore, Punjab, on February 9, 2017. They held banners alleging Jang Group owner Mir Shakilur Rehman was a traitor and demanded that he be hanged. They also hurled threats against both Rehman and the Jang Media Group.

In the second case, Kohinoor TV reporter Ahmed Nawaz, who is based in Kohlu, Balochistan, received verbal threats on February 13, 2017 from the vice chairman of the Kohlu district government for filing a news report that he saw a damaging to him. The reporter filed a complaint with the local police the next day.

In the third case, Islamabad-based Khabrain newspaper reporter Farrukh Nawaz Bhatti was on February 15, 2017 allegedly threatened of dire consequences by State Minister Tariq Fazal after a press conference. The next day he was chased by a car and a couple of motorbike riders who tried to open his car door in an apparent attempt to attack him but he sped his car and stopped at a police station to report the incident.

In the fourth case, ARY TV current affairs talkshow host Arshad Sharif on February 17, 2017 allegedly received a threatening call from a high official of an intelligence agency unhappy with his comments on air.

In the fifth case, Channel 7 TV reporter Azam Gill was on February 22, 2017 threatened by State Minister Anusha Rehman of dire consequences who was annoyed at the reporter recording her conversation with a colleague on his mobile phone in the Supreme Court premises. She also snatched his confiscated his mobile phone, which was returned later in the day after a compromise was stitched up between the two.

LEGAL CASE: Between February 22 and 24, 2017, three cases were registered in Karachi, Sindh, against Sajid Ali, a cameraman for TV channel Abtak, after the management lodged a case against him for allegedly leaking video footage of a TV program that investigates crime. The footage, which went viral on social media and generated controversial, seemed to indicate that the program producers were planting false evidence against a hostel manager. The first case was registered with the Cybercrime Wing of the Federal Investigation Agency (FIA), the second with the Kalakot Police Station and a third with the Korangi Police Station.

In the month of February 2017, no case of a physical attack on media offices were documented by the Press Clubs Safety Hubs Network. However, there one case of written and verbal threats against Jang Media Group by activists of sectarian group Sunni Ittehad Council who besieged the offices of Geo News TV and Jang newspaper in Lahore, Punjab, on February 9, 2017. They held banners alleging Jang Group and its owner Mir Shakilur Rehman were traitors and hurled threats against both Rehman and his media group.

There was no formal ban or enforced censorship on a media house this month. No information was available on a media house being served with a legal notice from either official quarters or from private parties.

In the month of January 2017, a total of five categories of attacks and threats against a total of 16 practitioners of various types of media were documented by the Press Clubs Safety Hubs Network and the media.

These included 16 cases of violations against television media, one against print media and one against a media group. No cases were documented against radio media or a freelance journalist.

During February 2017, the various reported or suspected threat actors attacking, threatening or harming media practitioners included Federal Investigation Agency, which arrested one journalist, two ministers who threatened two journalists, district government officials which threatened or beat up journalists and sectarian groups, which threatened a media owner and a media group.

In February 2017, the Pakistan Press Clubs Safety Hubs Network spent a busy month. Some of the key advocacy activities on journalists’ safety in this period included the following: