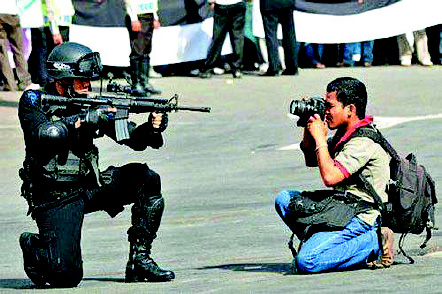 In the month of December 2016 in Pakistan, one journalist was attacked physically, one was abducted by security agencies, one was issued written threats and another sent verbal threats while two police cases were filed against another journalist for his reporting, according to documentation by the Pakistan Press Clubs Safety Hubs Network and the media.

Of the total of five cases of attacks and harassment of journalists in Pakistan in December 2016, two occurred in Khyber Pakhtunkhwa province, and one each in Islamabad, Balochistan province and Sindh province.

The most serious case this month involved the attack on the car of journalist Muhammad Asghar, working for Jehan Pakistan newspaper as reporter. Unknown car-riders on December 26, 2016 hit his car in Islamabad, injuring him slightly and rode away shouting abuses at him for his work.

Journalist Muhammad Usman, who works as correspondent for Waqt TV channel and Jehan-e-Pakistan newspaper, and is based in Dera Ismail Khan (Khyber Pakhtunkhwa province), was on December 2, 2016 forcefully taken away blindfolded by security agencies to an unknown place after he failed to produce registration documents of his motorcycle while he was on his way to a local university for coverage. He was kept in illegal detention for several hours during which the officials forced him to reveal his passwords and copied data from his laptop and an external hard drive. He was later let go after a warning and an apology.

Another Dera Ismail Khan-based journalist Muhammad Rizwan who is chief editor of local newspaper Sangam on December 27, 2016 received written dire threats in the shape of a letter related to his work. The threat was from unknown sources.

Freelance journalist Matiullah Achakzai, based in Chaman border town in Balochistan province, on December 12, 2016 was verbally threatened of dire consequences by the Station House Officer Chaman Police Station and an investigation officer. The threats came in the wake of the nomination of some local influential persons in a police case for breaking into the office of Achakzai’s businessman brother. Achakzai has also written to the deputy inspector general of Quetta Police about his harassment by the police officials.

Two police FIRs [first information reports] were filed against Imtiaz Chandio, a reporter for Abtak TV channel based in Karachi in Sindh province, by Sardar Khan Chandio, a member of Sindh Assembly representing the ruling Pakistan People’s Party. This adverse action as well as continuing verbal threats came after Imtiaz alleged in his news reports that Sardar was involved in illegal hunting of protected bird species.

In the month of December 2016, no case of attack on media offices were documented by the Press Clubs Safety Hubs Network. There were also no known cases of written or verbal threats, formal ban or enforced censorship on a media house this month. No information was available on a media house being served with a legal notice from either official quarters or from private parties.

In the month of December 2016, a total of five cases of attacks and threats against practitioners of various types of media were documented by the Press Clubs Safety Hubs Network. These included two cases of violations against television media and two against print media. One freelance journalist was threatened. No cases were documented against radio media, online media and other miscellaneous media.

In the month of December 2016, the Pakistan Press Clubs Safety Hubs Network spent a busy month. Some of the key advocacy activities on journalists’ safety in December 2016 included the following: