Freedom Network is alarmed at new measures to officially impose a new regime of censorship for newspapers in Pakistan. Freedom of expression is a universally recognized human right and part of the Universal Declaration of Human Rights. Elected parliaments are guarantors of constitutional freedoms enforcement of which are responsibilities of government. In Pakistan it is guaranteed under Article 19 with some exceptions. These exceptions have historically been invoked by both democratic and dictatorial regimes in Pakistan primarily to curb criticism of the military, judiciary and religion. The Supreme Court of Pakistan and the security establishment have in 2014-15 coercively held some parts of the media in contempt. Geo TV was charged with treason, convicted and punished for it. Others, including ARY TV and also Geo Entertainment, were indicted for blasphemy.

In May 2015, one of the key exception to freedom of exception – criticism of foreign countries friendly with Pakistan – has joined the list of reasons to browbeat the media. On May 13, 2015, an Orwellian missive arrived at the headquarters of the All Pakistan Newspaper Society (APNS) from the Pakistan Press Council (PPC), reveals Herald magazine on its website. Signed by PCP Director Judicial, it says: “The Chairman, PCP has desired that while reporting on Yemen Crisis and Saudi Arabia provision of Article 19 of Constitution of Islamic Republic of Pakistan may be kept in view by our print media. Acute case should be taken to avoid negative comments to ensure about our bilateral friendly relations with Arab countries are not adversely affected.” It also spells out Article 19 (freedom of expression) and Article 19A (right to information) to detail the exceptions to freedom of expression as an added emphasis to its directive.” 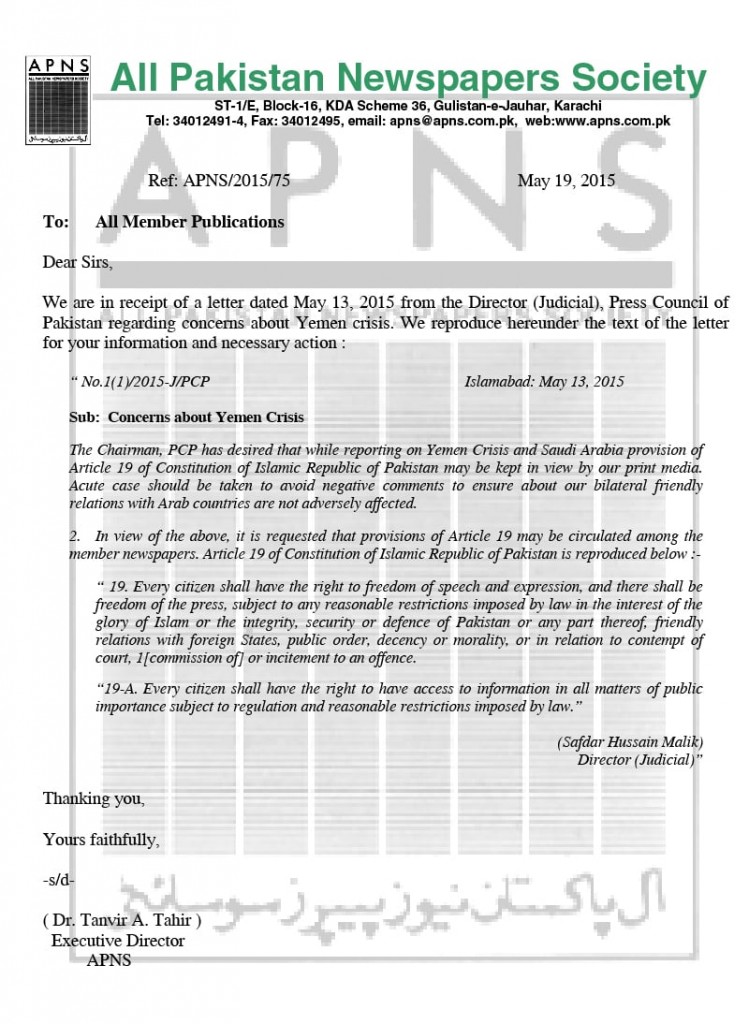 This unprecedentedly specific official directive to the media is disturbing for several reasons, explains media analyst and commentator Adnan Rehmat. “One is that this is nothing less than a mass gag order on the entire print media. The second is that it aims to impose overt censorship without declaring it so. The third is that an intermediary body with an essential mission to strengthen freedom of expression is being employed to do the exact opposite. The fourth is that the print media has been put on notice to prove its innocence for a crime that has not even been proved even through the very mechanism that allows for a due process of indictment. The timing is also dubious – most media moved away weeks ago from frontlining the seeming incongruity of Pakistan’s foreign policy on Yemen vis-a-vis blunt expectations of Saudi Arabia in particular and the other pro-Saudi Gulf state in general.”

It is disturbing that the PCP with its official mandate limited to strengthening print media and adjudicating disputes related to it is now somehow also in charge of managing the public narratives on foreign policy. One can discern government pressure from both elected and unelected mandarins of foreign policy activating the PCP to intimidate the media.

So, is PCP overstepping its mandate? The 11-page PCP Ordinance, 2002, seems to indicate so. Section 3 outlines its core mission, which is stated to be, “to implement the Ethical Code of Practice.” Section 8 has 14 clauses detailing the functions of PCP. None of these provide for singular or blanket directives to the media on restricting coverage on any issue. Clause (i) says “The Council, while preserving the freedom of the press, shall maintain highest professional and ethical standards of newspapers and news agencies with a view to making them more responsive to the issues and concerns of the society in Pakistan.” This seeks to defend press freedoms and strengthening ethical reporting, not dictating or prohibiting a certain type of coverage. Clause (ii) seeks, “To help newspapers and news agencies to maintain their independence.” The PCP directive to APNS seems to actually contravene this. Clause (iii) explicitly mandates PCP, “To keep under review any development likely to restrict the dissemination of news of public interest and importance.” The PCP directive, again, seemingly does the opposite.

Then Clause 1 of Section 9 expressly states that a complaint needs to be in place before the PCP can act against an erring print media outlet. The PCP directive, by implication, obviates the need for and pre-empts any complaint, or demonstrate a grievance, while directly ordering a remedy! Section 10 outlines an elaborate process for filing complaints, none of which has been followed before issuing the directive. Clause 1 of this section actually prohibits PCP from offering any directive or binding advice without first a complaint filed in compliance with the outlined procedure. It says: “No complaint shall be entertained by the Council unless the complainant has first given a notice to the concerned editor or publisher within 15 days of the publication of the matter complained against or appropriate relief.” This hasn’t happened.

In short, the PCP has seemingly taken the liberty to arrogate itself authority not vested to it under the law that governs it. According to Section 9, only an inquiry commission that independently investigates a complaint and suggests a solution provides the legitimacy of action that PCP can advise. This is not the case here. The PCP has no suo moto authority. Without an alleged crime and without following the due process of this law to indict there can be no remedy.

It is worrying that a supposed friend of the print media and a guarantor and advocate of greater media professionalism has seemingly chosen to serve as the Pakistani print media’s gagger-in-chief. The PCP’s directive to APNS is all but a blanket gag order, an overt edict of censorship. When defenders turn tormentors, professionalism suffers and arguably even lives are endangered. The PCP directive has threatened media freedom in Pakistan. This can only hurt the concept and constitutionally enshrined right to freedom of expression. Freedom Network urges PCP to reconsider and recall its unnecessary directive and for APNS to not strengthen attempts at censoring the newspapers of Pakistan by accepting and not challenging such directives.