The February 22 letter signed by Project Director of “Billion Tree Afforestation Project” of Khyber Pakhtunkhwa government, obtained by Freedom Network, urged the journalist that an “early action in this respect is requested.”

Arshad Aziz had filed an investigative story about the claim of “billion tree” for his Daily Jang and sister publication The News International on February 7, 2018, quoting “official documents” to challenge the government’s claim.

Using its right-to-reply, the government issued a detailed rejoinder on February 9 and both the newspapers carried it on February 10, meeting journalistic standards. 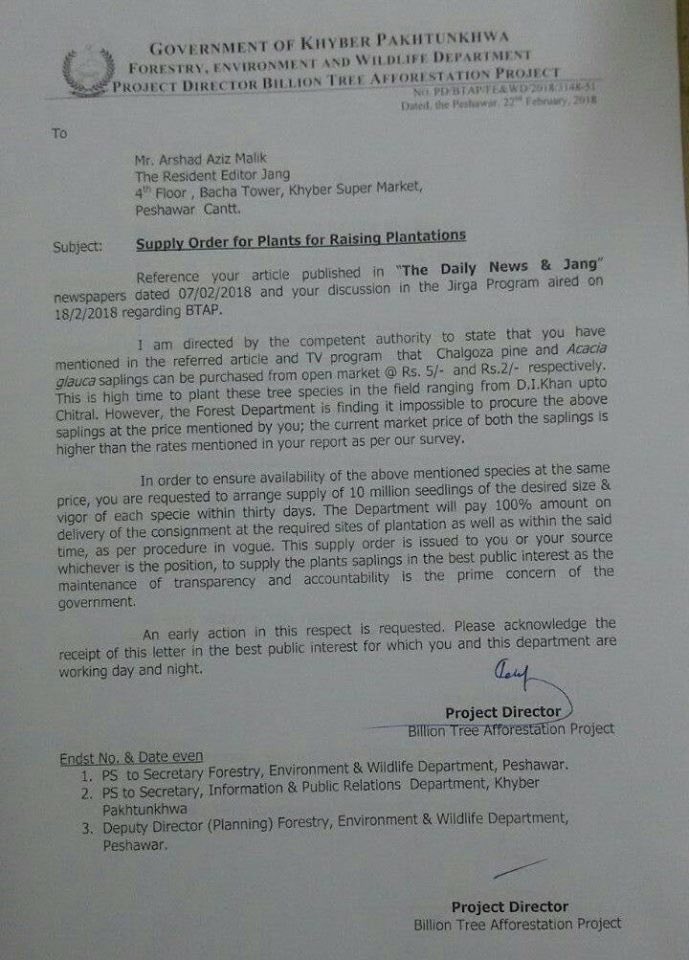 “Freedom Network takes exception to this letter and views it as total disrespect to the press freedom and media rights on part of the KP government and demands immediate withdrawal of the letter to respect media rights in the province,” Freedom Network [FN], Pakistan’s first media watchdog organization, said February 26, 2018, in its Press Freedom Alert.

It adds: “It is for the first time that any government issued such letter asking the journalist to make supply. This letter amounts to degrading journalism besides naming and shaming the journalist, which is unacceptable. If the letter is not withdrawn immediately the KP government will join the list of Press Freedom predators in the country.”

The media watchdog said the ruling Pakistan Tehreek-e-Insaf party should rise to its claim of respecting press freedom and journalists’ right to ask questions. “This letter will not help make enabling environment for journalists in Khyber Pakhtunkhwa where militancy has already had negative impact on professional and independent journalism,” the Press Freedom alert warned.

Arshad Aziz told FN that this letter was “humiliating, insulting and tantamount to stopping journalists from auditing” government actions. “I exercised high degree of ethical journalism giving the accused right-to-reply and carrying its detailed rejoinder after my investigative story. However, when journalistic standards were met this action of the provincial government is absurd and calls for action,” he held the view.