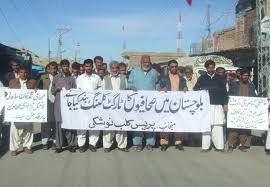 It is not easy to be a journalist in Pakistan’s volatile southwestern province Baluchistan.

More than two dozen journalists have either been killed in suicide attacks in the line of duty or subjected to targeted killings and enforced-disappearances. State and non-state actors both pressurize and intimidate journalists to toe their line – whether fair or unfair.

The media here is faced with multiple threats. As a result, journalists have to kill the news or be killed. Every group in the ongoing conflict wants the media to obey its orders. Balanced reporting and acquisition of information, based on facts and figures, has become almost impossible for journalists in Baluchistan, plagued by sectarian violence and attacks by Baluch separatists. “We have been sandwiched between armed people from all sides”, says Khudai Noor Nasar, who works for Mashaal Radio.

For instance, militant groups and spokesmen of law enforcement agencies call newsmen and insist that their news should be published without editing. However, most of the time, journalists and independent sources cannot get the news confirmed. Journalists, then, have little choice but to follow instructions from the banned groups. “We have no option other than being dictated”, Nasar said.

There are difficulties to get credible information as the groups involved in the conflict fight a media war against each other. Journalists have become scapegoats in such situation where every party in the ongoing conflict appears to be skeptical about media.

Scores of civilians as well as law enforcers have been killed in the provincial capital Quetta and most parts of Central Balochistan including Khuzdar, Kalat and Mastung in the ongoing wave of targeted killings, growing sectarian suicide attacks and bombings. “The situation is getting worse in Balochistan, increasing the level of threats to media”, Nasar said.

Over the last seven years, more than two dozen Pakistani journalists have fallen prey to bullets in Quetta and different parts of the sparsely populated but geographically biggest province of the Islamic republic. The murderers are still at large and the authorities appear helpless. While continuously reporting such heinous crimes, journalists live with a deep sense of insecurity.

Dr. Chishti Mujahid, a well-known photographer with weekly magazine Akhbar e Jehan magazine was killed in 2008. Bullet riddled bodies of journalists have been found in Makran belt during the last two years, with their killers still at large.

Similarly, Imran Sheikh, Muhammad Iqbal Mirza of NNI news agency, Malik Arif and Ejaz Raisani, cameramen with Samaa TV, were killed during three different suicide attacks in Quetta. Since they had no proper security and safety training, both were consumed by the suicide bomber while standing in the middle of crowd.

Media organizations whether print or electronic don’t train cameramen or reporters to report from a safe distance. Over two dozen journalists were injured during different suicide attacks, bomb explosions and firing as they have no proper safety training to avoid standing on the spot after its clearance by law enforcers. For long, we have learnt that often blasts follow one another. The one that happens after the first takes a greater human toll in terms of numbers as well as valued targets. “It is an irony of fate that media houses insure their equipment but not the journalists”, says Irfan Saeed, the President Balochistan Union of Journalists.

In Ocotber 2011, Balochistan High Court Chief Justice Qazi Faez Issa ordered media not to publish statements of banned militant groups during the hearing of a suo moto notice of Mastung incident where 26 Shia pilgrims were killed. Initially, the media abided by courts orders but later succumbed to threats of the militant groups. Violating the apex courts orders, the media houses published statements of banned organizations in a careful way to survive for the next story. “Journalism is tough in this part of the country”, says Saeed.

Syed Ali Shah is Quetta-based journalist/analyst/researcher. He is also bureau chief of DawnNews TV channel and member of the Board of Advisers of Freedom Network and he can be reached on syedali.shah3@gmail.com