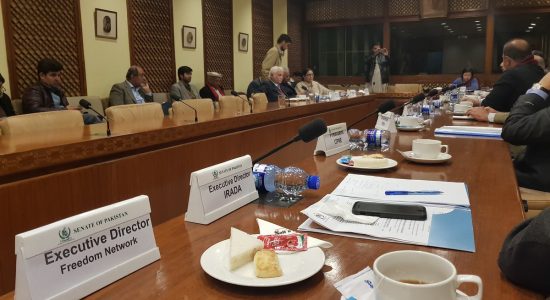 “It is great news that the federal government, Pakistan Federal Union of Journalists, media owners – represented through All Pakistan Newspaper Society (APNS) and Pakistan Broadcasters Association – agree on need for new draft law to protect journalists and tackle impunity for crimes against media and its practioners,” Iqbal Khattak, the Executive Director of Freedom Network, said after the meeting of Senate Sub-Committee on Information and Broadcasting in Islamabad on January 4, 2017.

Iqbal Khattak, who is also country representative of global media rights group Reporters Without Borders in Pakistan, went on to add: “The complete unanimity reached among the key stakeholders is a significant milestone to enact model law on journalists’ protection in Pakistan.”

Pakistan has been one of the most dangerous countries to practice journalism as over 110 journalists were killed, mostly target-killed, since 2002. Out of these murder cases of journalists, just two cases of killed journalists were investigated, accused arrested and convicted.

Two important decisions were taken at the meeting. First, Minister of State for Information and Broadcasting Maryam Aurangzaib said the federal government scrapped its previous two drafts on journalists’ welfare and protection law and the second decision was that journalists’ protection-focused law would be drafted as was the demand of the journalist community and civil society organizations.

“I want to draft new law within 10 days as we have little time before the nation goes to general elections in next a few months,” Senator Farhatullah Babar said.

The APNS and the PBA representatives told the meeting that they would welcome journalists protection-focused law while existing laws could be revisited to get owners-journalists’ relations better.

Iqbal Khattak, who was among special invitees besides Muhammad Aftab Alam, the Executive Director of IRADA, was asked to share with the sub-committee inputs what the draft law should entail to protect journalists.

PFUJ President Afzal Butt and seasoned journalist and PFUJ Fecederal Executive Committee member Nasir Malick also attended the meeting and both leaders stressed the meeting that law to protect journalists’ and combat impunity should no more be delayed.

Upon pointation by Iqbal Khattak, the sub-committee decided to consider ‘Islamabad Declaration’ of Pakistan Coalition on Media Safety (PCOMS) in which roles and responsibilities of government, media houses, journalists and civil society organizations were clearly defined and it was endorsed by all media stakeholders during the launch of the UN Plan of Action in October 2013.

The meeting also made analysis, made jointly by Freedom Network and IRADA, of previous government draft bill on journalists protection part of meeting minutes.