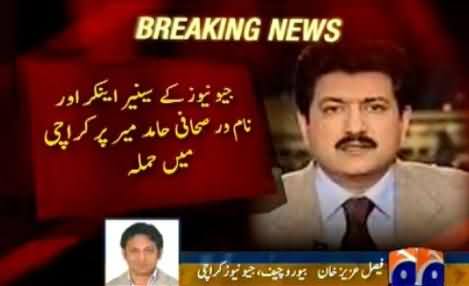 A judicial commission set up in Pakistan to investigate a debilitating attack on prominent journalist Hamid Mir has not been able to determine the actual reasons and culprits behind the high-profile case, according to the leaked version of Commission report.

Freedom Network (FN), a Pakistani media watchdog and civil liberties group, which gained access to the report, in a statement on April 9, 2016, noted that the Commission had submitted its findings to the government on December 15, 2015 but which has not been made officially public. FN said that it requested an official version of the report from the government but was refused.

“It is regrettable that the government, as in the past in so many cases, has not released the report itself officially thus losing an opportunity to take people into confidence on this important issue of freedom of expression,” a statement from FN said.

The judicial commission comprising three Supreme Court of Pakistan judges – Justice Anwar Zaheer Jamali, Justice Ejaz Afzal and Justice Iqbal Hameedur Rahman – was established by the government on April 21, 2014, two days after the murderous attack when Hamid Mir was heading to his office in Karachi from the airport. In the gun attack, he received several bullet wounds but survived. The government also announced a reward of Rs10 million for any information leading to the arrest of culprits but even this has not helped in getting to the truth.

The inquiry report says that “When we closely look at the material brought on record pertaining to the incident of firing at Mr. Hamid Mir right from its inception, we find that there was complete failure on the part of all the law enforcing agencies in the performance of their duty to properly investigate the instant case.” The Commission also noted that the first information report (police FIR) was filed four days after the incident, hence delaying proper investigations.

Speaking to FN, Hamid Mir responding to the leaked report, said it had made his pain ‘intolerable.’ “The first thing I face every morning is pain, which has become part of my life. I have learnt how to live with this hurting pain in the legs and shoulder but I can’t tolerate this new pain generated by a leaked report.”

The Commission report also points out that a thorough analysis of the geo fencing data was called for in the matter but never done. “Had such exercise been undertaken with due diligence, it would have definitely provided the investigating agencies clue towards the perpetrators of the crime. Such lapse clearly hinted at inefficiency, lack of commitment and dedication to duty on the part of the law enforcing agencies as well as absence of coordination and cooperation among them. In the process, improper considerations also could not be overruled,” the Commission remarked in its findings.

Hamid Mir told FN that the law enforcement agencies failed in probing geo fencing data or action taken on the basis of CCTV footages “which means state institutions were doing nothing and making fun of my wounds.” He alleged that the findings of this report “points to ISI [involvement in the attack on him] more than it did in the Saleem Shehzad Commission report.” Hamid Mir said the Commission did not document his boycott of the Joint Investigation Team in Karachi, because, according to him ISI was part of this Team. “I nominated ISI officials in my statement to police in Karachi but this statement is missing from the report.”

Responding to the findings of the leaked report, FN noted that the Commission in its general assessment of the situation did point to some alarming problems in the Pakistani media. “All means are adopted to malign not only the country as a whole, but each and every institution and organization of the State as well. Every attempt is made to make everything controversial. It is unfortunate that a number of individuals or groups of individuals are employed in the process. The mad race for breaking news and getting lead makes the things from bad to worse,” the Commission said.

The Commission further states that “Indeed, the journalists are the eyes and ears of the society, however, the manner and method of reporting in the modern days, gives rise to a question whether the media houses are providing information to the people or creating panic in the society? It is an alarming state of affairs. All the stakeholders are required to be careful and cautious in conducting themselves in their respective spheres lest the damage resulting from an irresponsible approaches, actions and reactions becomes irreparable.”

According to FN, this sweeping generalization about the media’s failure to be professional amounts to indirect indictment of the media by the Commission as being responsible for the attacks against it.

The Commission has also given a clean chit to Pakistani intelligence agencies for lack of apparent solid evidence. Hamid Mir’s brother Amir Mir soon after the attack had alleged that intelligence agency ISI could be behind the attack. But the Commission report pointedly says, “The officers of the ISI/ISPR [military media wing] in their affidavits expressed their complete disassociation with the incident. However, as against it, all persons belonging to the print and electronic media, in their affidavits/statements did raise their fingers towards a Federal Agency (ISI). We have held hereinabove that the assertions so made by them were essentially based on suspicions, assumptions or apprehensions and were in the nature of hearsay evidence, hence of no material assistance to the Commission in determining the culpability of any individual or organization…”

FN said it welcomed the Commission’s decision to reiterate recommendations made by another judicial commission to probe into the death of late Saleem Shahzad in January 2012, in which case also the intelligence agencies were accused but the allegations were not proved.

The Hamid Mir Judicial Commission report endorsed the recommendations made by a Special Working Group of Pakistan Coalition on Media Safety (PCOMS) to investigate attacks against media practitioners in Pakistan, including appointment of a special prosecutor on journalists’ safety, legal aid unit for journalists in distress, counselling unit for families of journalists killed and a primary case investigation unit to actively pursue cases of attacks against journalists and media.

“It is important to note that the Commission regrets that the authorities did not give any importance to earlier recommendations on journalists’ safety. This is appropriate as so far no further progress appears to have been made in the matter by the government,” the FN statement said, adding that had any concrete steps been taken in line with the recommendations so made, recurrence of such incidents would have been avoided.