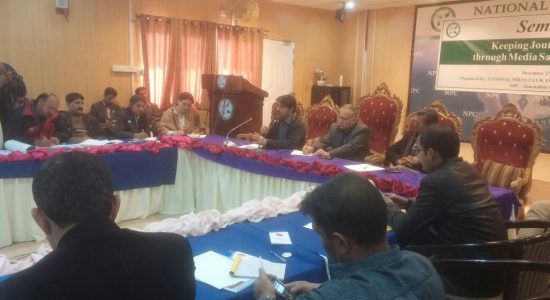 They also demanded that a draft bill on journalists’ protection produced by the federal government be presented before the working journalists at the earliest for their detailed inputs before being tabled in the National Assembly for enactment.

The demand was made at a seminar at the National Press Club in Islamabad through a unanimous declaration after a thorough discussion on the high level of impunity that attackers of journalists and media in Pakistan enjoy. The seminar was conducted by National Press Club in collaboration with Pakistani media rights organization Freedom Network with technical assistance of the International Media Support (IMS).

The declaration adopted by the participants at the end of the consultation said: “We the journalists of Pakistan, including from all four provinces and the Federally Administered Tribal Areas (FATA), demand that the federal government should expedite the tabling of a comprehensive legislative bill on journalists’ safety. However, we demand that being the principal intended beneficiary of the proposed bill, the working journalists’ community be consulted before tabling the bill in the National Assembly. We also demand that besides a federal law, there should also be provincial bills on journalists’ safety and protection, including safety and protection of women journalists. Both the federal and provincial laws on journalists’ safety should reflect the guidelines of the UN Action Plan on Impunity against Journalists and Issues of Safety as well as global best practices.”

Speaking at the seminar the National Press Club President Shakeel Anjum said that the draft bill on journalists’ safety produced by the Pakistan Muslim League-N government should be urgently shared with working journalists for their inputs without which the law will not find support and remain unrepresentative. He regretted that the government has been dragging its feet first on drafting the bill and now on sharing it with principal stakeholders.

Riaz Ahmed, the chairman of the Ad Hoc Committee on Unification of Journalists Unions said that it is incomprehensible why the government, despite promises, is not sharing the draft bill with the journalists. He urged unification in the ranks of journalists to ensure that their interest were not compromised. He emphasized that the bill also needs to consider economic security for journalists.

Speaking on the occasion, journalists and media rights activist Adnan Rehmat said that the government deserves credit for first accepting that the journalists of Pakistan get a raw deal and face many threats and obstacles in performing their duties and then going ahead and drafting a law on journalists’ safety as demanded by them. However, he urged that justice delayed is justice denied and the bill should be made public at the earliest so that journalists and media workers can provide inputs. He also urged that on the pattern of the Right to Information laws in the provinces, the four provinces should also enact their own laws on safety of journalists.

Rehmat urged political parties and legislatures at both the federal and provincial levels to protect the interests of journalists emphasizing that if journalists are unsafe and endangered then media cannot be free in which case democracy will remain threatened in Pakistan. He also provided an overview of the UN Action Plan on Impunity against Journalists’ and Issues of Safety.

Others who spoke on the occasion included senior representatives from press clubs all over the country including Shahzada Zulfikar, Saeed Ahmad, Ghulam Mustafa, Ali Shah, Gohar Ali, Fazlur Rehman, Myra Imran and others.