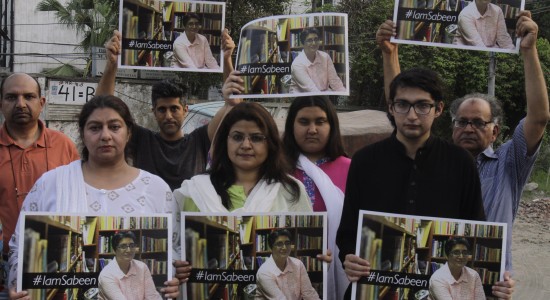 Freedom Network is shocked at brutal murder of media and human rights activist Ms Sabeen Mahmud who was shot dead in Karachi on Friday – April 24, 2015 – minutes after hosting discussion on Balochistan at her T2F – The Second Floor – a cafe and arts space that has been a mainstay of Karachi’s activists since 2007.

She was one of the country’s most outspoken media and human rights advocates.

At social media platforms, immediate accusing fingers are being pointed at the state institutions and other elements, however, FN demands judicial inquiry to determine perpetrators of the crime are brought to justice. “We also demand that the ToRs for the judicial inquiry are set in due course of consultation with media and human rights activists and organization to help find the hands who committed this heinous crime,” the FN alert went on to ask.

She is the second host of such discussion focusing human rights violations in Balochistan to be attacked after Hamid Mir who was meted out similar treatment but survived the attack and still doing journalism with two bullets inside his body.

“It appears now that a systematic and organzied campaign is being orchestrated to target liber and dissenting voices such as Ms Sabeen Mahmud and Hamid Mir,” FN asserted calling the trend dangerous for the people and the country itself, urging that it must be discouraged to promote critical thinking in Pakistan.

Senior Karachi Police official Dr Jamil Ahmed ruled out the killing as result of a mugging attempt and said she had been attacked “deliberately” but he stopped short to share any possible motive. The activist was “returning home with her mother in a car after the seminar she had organised on Balochistan,” the police official was quoted as saying.

Ms Mahmud, 40, was the director of T2F, a cafe and arts space that has been a mainstay of Karachi’s activists since it opened its doors in 2007. She was one of the country’s most outspoken human rights advocates.

Dr Jamil was quoted as saying that the media and human rights activist’s murder was “an incident of targeted killing.”

Defence police SHO Kansan Dean said pillion riders on a motorcycle attacked Ms Mehmud and her mother on Sunset Boulevard in DHA Phase-II after they had left the T2F in a car. Both of them suffered bullet injuries and were taken to a nearby private hospital where doctors pronounced Sabeen dead.

Her mother was shifted to the Aga Khan University Hospital. “She sustained four bullet injuries on her face, neck and chest,” police surgeon Dr Jalil Qadir told media. Her autopsy, conducted by senior medico-legal officer Dr Nasreen Qamar, also showed injuries on her arm and shoulder that might be bullet exit wounds, added the police surgeon.

“It appears that an attempt is being made to silence human rights defenders or those who take up the causes of the people,” The Human Rights Commission of Pakistan’s Chairperson Zohra Yusuf said after the incident.

Earlier this month, such a discussion on Balochistan – ‘Unsilencing Balochistan’ – was censored when the organizers – Lahore University of Management Sciences (LUMS) – cancelled the programme allegedly under pressure from the ISI.

Meanwhile, spokesman for army Maj.-Gen. Asim “condemned” the killing of Ms Sabeen Mahmud in Twitter message as “tragic and unfortunate.” Adding, “We condemn the tragic & unfortunate killing of Ms Sabeen Mahmud. Our heart goes out to bereaved family at this sad moment. Intelligence agencies been tasked 2 render all possible assistance 2 investigating agencies 4 apprehension of perpetrators &bring them to justice.”

“It was the same seminar which was organised by LUMS where three speakers – Mama Qadeer, Farzana Majeed and Mohammed Ali Talpur – were the same, but it was cancelled under alleged pressure of ISI,” the HRCP chief said.

“It can’t be said categorically that her murder was linked with this event,” Ms Yusuf said.

The HRCP chief said: “As Ms Sabeen has been consistently providing the space of T2F to discuss the issues of human rights, cultural diversity etc due to which she had received threats, prompting her to hire the services of a security guard.”

“She was trying to promote liberal and rational thinking, which is lacking in society,” said Ms Yusuf.

Sindh Chief Minister Qaim Ali Shah, who is in charge of the home ministry, sought a report about the incident and ordered the city police chief to arrest the killers, a report in Dawn newspaper said.

Karachi police chief Ghulam Qadir Thebo formed a special team, headed by a deputy inspector general, to investigate the murder, according to his spokesman.

Police official Dr Jamil Ahmed said they were also looking into possibility of involvement of extremist organizations as they believed she was targeted for being a liberal female activist.

“Secondly, the police assert that since stability was returning and law and order situation was improving in the city, an “enemy country or its intelligence agency” may have wanted to give a “complicated turn” to it by targeting a prominent rights activist. We are also investigating whether her murder might be related to some “personal enmity. These are some of the aspects on which the investigators are working,” said the police official.