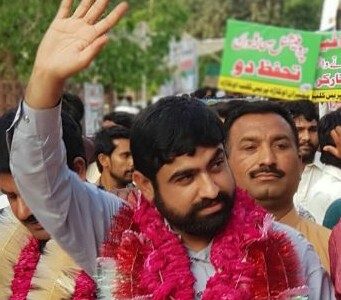 Journalist Hafiz Hasnain Raza has spent almost 23 months behind bars since he was arrested on 26 April 2016 under terrorism charges for covering farmers’ protests against government authorities in Okara district of Punjab province. He was freed on 10 March 2018 after getting bails in 17 cases – 12 under Anti-Terrorism Act and rest civil – registered against him.

Freedom Network: How long did you spend in jail and what sort of problems you faced?

Hafiz Hasnain: I have been in prisons for almost 23 months (almost two years), where I faced extreme difficulties. I was kept in death cell in Block 7 meant for terrorists. I went through unbearable sufferings and isolation. Electricity was cut off, hot water during summer and high-voltage bulb turned on during hot weather were some tactics the authorities applied against me. They would not provide me quilt in cold winters, gave me less food to eat, just a little bread and distasteful meals full of salt and pepper. Nothing else was served to eat. I was given one suit to wear and I was not allowed to change dress for long durations. Black soap was provided for washing face and hands. One plate and a glass plus one sheet of cloth and unhygienic blanket were the only things I had bee provided. Despite Home Department permission, I was not allowed to meet with my mother, sisters and brothers for days. Prayers were not allowed too. No prayers or meetings even on Eid days. I would only get the opportunity to clean myself when I was supposed to appear in court. No permission for cutting hair or nails. No anti-mosquito sprays. They would resort to extreme mental violence. They would put black cloth on the face and forced me to make sounds of animals. They would put shackles in my feet. Because of lack of light, days looked like nights. We would rarely hear sound of Azaans. During the detention, I was not allowed to take a walk. I was taken out from my cell only for court appearances. I lost a lot of weight during this period. I was made to stand up as a new jail staffer would switch duties in four hours. My picture was among the most dangerous prisoners in Sahiwal Central Jail and it’s possible that it is still there. Food sent from my home never got to me. Cells next to me were empty so I was like isolated so that I lose my senses. Instead of being taken to hospital, I was given medication there. No tests were allowed for diagnosing disease. I was not allowed to be admitted to hospital. I was made to sleep on the floor in all weathers. The washroom inside the cell was unhygienic. I was taken to the hospital inside the prison once and made to lay on the floor there too and not on the bed. I was made to stand in sun while fasting. They would blindfold me and tied my hands behind my back.

FN: Tell us for which crime you were made to undergo prison for so long?

HH: The punishment was for speaking and writing the truth – this habit I got from my late father who was also a journalist. My father too went to prison three times for publishing stories based on truth and not shaking hands with the authorities. Finally, he lost his left leg because of authorities’ torture. I became diabetic in prison. I was punished for reporting on the long-standing dispute over farmland between the authorities and local farmers. I had to face unfounded cases. My crime was publishing news based on facts.

FN: Cases were registered against other journalists as well along with you, but why only you had to undergo jail sentence?

HH: Other journalists got rid of them after submitting written apology and seeking the authorities’ mercy. Two journalists were sacked by their organizations. After five-month detention, police and local authorities asked me to sign written apology and turn a witness against the farmers which I refused so they registered more cases against me. Two journalists from Nawa-e-Waqt – Altaf Hussain Anwar (Saqi) and Rai Ali Akbar Kharal – published news in my support but had to go underground for several months because of police raids.

FN: Did you even imagine that you could face such difficulties because of journalism?

HH: Yes! Because my father had suffered the same and he died in the same situation. I was unconsciously ready and nature had prepared me mentally and physically. I could not stop myself despite advice of near and dear ones not to tread the journalism’s dangerous path. I like my father may take decisions from my heart, not from my mind. I consider collective benefit more important than my own individual benefits.

FN: In this difficult time, your organization, journalist community, workforce (local and national level) non-profit organizations did anyone helped you or not?

HH: Journalists did not dare protest in my favour because of establishment of criminal cases against journalists in the whole district. Iqbal Khattak (the Executive Director of Freedom Network and country representative of Reporters Without Borders in Pakistan) helped my father, and he gave me all the time legal and moral support. My organization and several journalist organizations outside Okara district organized demonstrations and rallies across Punjab. Especially Nawa-e-Waqt and some other newspapers continued to cover and report news and protests. Columnist Ajmal Nazi, editorial of Nawa-e-Waqt, The Nation, anchorperson Hamid Mir wrote many times and raised voice for me in the Parliament and on social media. Without doubt, because of Ms Ramiza Nizami, Nawa-e-Waqt gave a lot of support. Others did not do much. Two local Nawa-e-Waqt reporters Altaf Saqi and Rai Ali Akbar faced problems for publishing my mother’s statement and news of my torture. They had to abandon their homes because of police raids.

FN: Now that you have become a symbol of freedom of journalism, and today International Journalism Day is being observed, what would you like to convey to the government, the public and the media?

HH: No doubt the morning star’s life is not long but he gives the message of a new dawn. As my father suffered, Hamid Mir, Ahmed Noorani and Matiullah Jan survived attempted murders but they are steadfast in their views. This is enough to shake yellow journalism. We as a journalist should continue to highlight problems of the poor of Pakistan and strive for balanced journalism. But I would also say that instead of divide-and-rule policy for Pakistani journalist bodies unite and rules should be adopted so that local journalists are not relegated to nowhere. Lawyers and academicians have academic and bar councils, whose membership is the right of each lawyer and they take part in elections under one umbrella. Under the same rule, there should be one press club at one place, and there is no other option to get a membership and instead of deputing the reporters, separate marketing staff should be deployed at district levels who in coordination with local reporter try to get business for the organization. Correspondents should be full time and not honorary who get regularly paid. Journalists should have insurance, free medical treatment and free or less costly education of children should be ensured by journalists unions.