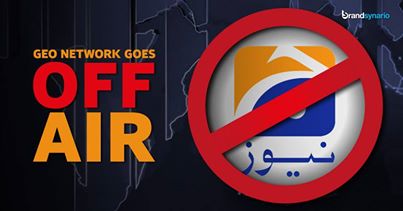 Freedom Network [FN] is alarmed at the precedent of limited duration banning of the broadcast operations of independent 24/7 Geo News channel because it reflects a turning point in the limits of tolerance of powerful state agencies in Pakistan to criticism about them.

FN, Pakistan’s first media rights watchdog, which monitors trends in Pakistani media, feels that this precedent, under which the license of Geo News channel has been suspended for 15 days and a fine of Rs10 million on 6 June 2014 has been slapped on it by media regulator PEMRA (Pakistan Electronic Media Regulatory Authority) based on a request from the  Ministry of Defense could force self-censorship by other media groups and even similar limited-period or permanent bans on media houses in the future.

“Democratic countries don’t ban TV channels or media houses because media operations come in the ambit of freedom of expression and right to information, which are also guaranteed as fundamental rights under Pakistani constitution,” a FN press freedom alert said on 7 June 2014, adding that banning a channel, even for a few days or minutes, is a significant restriction on freedom of expression and a step backwards on the principles of open society and open communication policies.

“The significance of independent media being the pillar of the state lies in its ability to hold the government authorities accountable for possible abuse of authority but when the same authority is used to curb a media house it signifies a cut back in media freedoms and actually proves why high-handed management of the media crisis is counter-productive to Pakistan’s democratic aspirations,” the FN alert goes on to say.

It added that the way Geo channel’s case has been handled and the nature of punishment announced also raises serious questions about the national media regulator PEMRA’s ability to serve as a friend of the broadcast sector rather than being subservient to various government authorities, including elected government and unelected state agencies. The alert added that this is a fit case for serious reforms to both PEMRA’s regulations and beefing up other laws guaranteeing freedom of expression and right to information.

“Any excesses allegedly committed by Geo News channel should have been settled calmly and procedurally instead of tolerating and even fanning excessively negative soundbites in the public domain by officials of state agencies, rival media houses and political and religious parties against Geo TV,” the FN alert said. “This unruly behavior and passionate outbursts managed to incite a string of attacks against the media group’s journalists and workers while also registering of dozens of cases against it in lower courts on charges ranging from treason to blasphemy and issuance of fatwas against the media house.”

The federal government of Prime Minister Nawaz Sharif has pledged commitment to supporting free media in Pakistan during a March 19 meeting with high-level delegation of Committee to Protect Journalists. However, the defence minister, Khawaja Asif, statement on 7 June 2014 that he was unsatisfied with the PEMRA decision has taken the FN aback.

“We will be forced to think that the federal government does not follow the prime minister’s course of action in relation to freedom of press and freedom of expression if the defence ministry goes in appeal against the PEMRA suspension,” the FN alert warned.

The relevant authorities are urged to immediately undo the suspension of the license of Geo TV and deal with the channel’s alleged violations of law through non-punitive legal means in a way that do not affect the people’s right to information through a variety of news sources, including Geo TV, the alert said.

“The body after a discussion unanimously decided to immediately suspend the license of Geo News for a period of 15 days, besides imposing a fine of Rs10 million to be paid before the expiry of the suspension period,” the regulatory body’s spokesman was quoted in media reports.

The spokesman said: “In case of non-payment of fine, the suspension of the license will continue.”

He was quoted as saying in online editions of Pakistani newspapers that the license was suspended on a complaint filed by the Defence Ministry after the ISI lodged the complaint over the allegations that it plotted the attack on Hamid Mir for his shows on missing Baloch persons, military’s interference in affairs of civilian government and prevalence of rule of law in the country.

Besides the suspension the regulatory authority also imposed heavy fine of Rs.10 million on the channel. PEMRA said the suspension would stay as long as the fine was not paid.

PEMRA warned the channel that if it continued to repeat violations of rules of business proceedings for revocation of the license would be initiated.

Geo News channel reacted to the suspension and fine order angrily saying it was not heard and that the channel was being punished since April 19 when it was taken off cable network in most parts of the country.

Geo News said that the regulatory body had “already been punishing the channel”, adding that the broadcast was not available “in 90 per cent of areas” in the country for the last 45 days.

The statement further said that the channel had already apologised and had incurred Rs2 billion in losses.

The channel added that “Geo News was not provided with any evidence nor was its stance heard by the PEMRA.”

The PEMRA meeting was convened with newly-appointed chairman Parvez Rathore in the chair under Rule 3(4) of PEMRA Rules 2009. The meeting deliberated on a complaint filed by the defence ministry against Geo News in light of the Law Ministry’s opinion, the spokesman said.

“All field offices of Pemra have been directed to implement the decision of the authority in letter and spirit with immediate effect,” the spokesman said.

Meanwhile, Geo News has sued the Inter-Services Intelligence (ISI) for defamation over accusations of being anti-state, it said on Friday (06 June 2014.

Geo News, part of the privately-owned Jang Group, has also given the ISI 14 days to issue a public apology.

“Geo and Jang Group (have) served a legal notice on the Ministry of Defence, Inter-Services Intelligence and Pakistan Electronic Media Regulatory Authority for defaming and maligning the group,” the channel said in a report published in The News.

“More than 8,000 journalists, workers and professionals attached to the group and their families are not only being harassed but also attacked and tortured across Pakistan,” it said.

In April, the Defence Ministry had demanded that the license of Geo News be suspended after it provided air space to journalist Amir Mir who accused the ISI of being behind the shooting of his brother Hamid Mir, one of Pakistan’s most famous television anchormen.

Since the dispute began, Geo News has been taken off the air in several parts of the country or been moved to obscure slots on the channel lineup by the cable operators, allegedly under pressure from the military, according to the lawsuit.

Distribution of the parent group’s newspapers has also been disrupted.