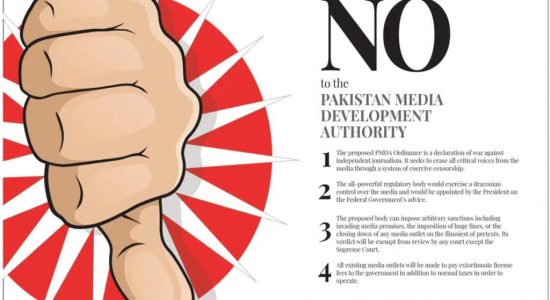 “This proposed establishment of PMDA is no less than a digital martial law when the federal government will arm its appointed officer with administrative and judicial powers to crush dissent and alternative opinion,” Iqbal Khattak, Executive Director of Freedom Network, said in a press release on Friday – 04 June 2021.

The PDMA would repeal all major media-related regulatory authorities, said Iqbal Khattak, which was not acceptable at any cost. “The proposed PDMA will give the government all the powers to control Internet instead reforming the media legal framework in the country which is the need of the hour.”

Freedom Network’s Executive Director said the PDMA would serve as a hanging sword for the media in general and Internet freedom in particular as the authority would make the Internet where citizens express themselves when mainstream media is censored to report certain themes because of the government and the state’s immense pressure.

As the proposed authority’s mandate gave the government sweeping powers to control the media there was just one appeal right given against the authority’s decision at the Supreme Court level.

“With this authority, the independent media’s envisagement would vanish into thin air,” Iqbal Khattak said, adding the media never faced such a harsher situation under civilian rule as it was experiencing under the current government.

He said a broad-based alliance of all stakeholders, including political parties and civil society besides media and journalism institutions, should come into effect to oppose the bill forcing the government to withdraw the proposed authority.

The government’s move came days after it finally tabled a bill to protect journalists and instead focusing on ending impunity for crimes against media and its practitioners to provide an enabling environment for independent and professional journalism the proposed establishment of PMDA exposed the government’s real intention to control the media.

In recent Freedom Network’s State of the Press Freedom Report 2021, Islamabad emerged as the most dangerous city to practice journalism with 34 percent violations reported from the federal capital territory.

The government, Iqbal Khattak advised, should play its role in rescuing the media from poor economic conditions and increased censorship when opposition leaders’ voices were shut, even private independent TV channels.

Through consultative process, Freedom Network Executive Director suggested, the government should engage all media stakeholders to help media develop and Pakistan became a hub of information in South Asia.