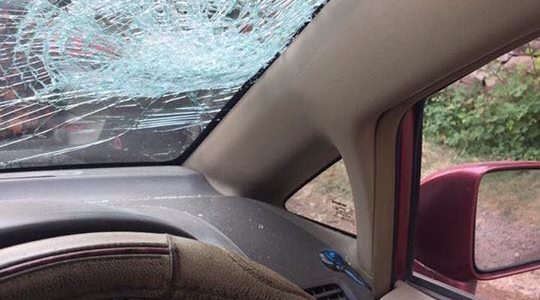 Fourteen journalists and media assistants were victims of attacks, arrests, verbal threats and legal cases during September 2017 across Pakistan, including special regions such as Federally Administered Tribal Areas and Gilgit-Baltistan. These cases’ documentation was undertaken under Pakistan Press Club Safety Hub Network, managed by Islamabad-based Freedom Network organization. It has been the second month having seen attacks, arrests and legal cases against journalists in as big number as there were in August.

HARASSMENT/ASSAULTS/ATTACKS: Nine journalists were attacked while on professional duties. On September 24, two motorcyclists hurled brick to smash windscreen of car of senior journalist Matiullah Jan who hosts talk-show on Waqt News and writes weekly op-ed piece, in Barakahu area near Islamabad. He and his children survived the attack. “I do not have any family or personal feud and this attack is a signal for me,” he confided to Freedom Network. The attack on the journalist alerted the journalist community, which stood by Jan to form team to investigate the attack under senior journalist Hamid Mir.

Plain-clothed security personnel attacked on September 26 three TV journalists – Amir Saeed Abbasi of Dunya News, Shah Khalid Hamdani of 92 News and Saad bin Altaf of Neo TV channels – were attacked during coverage of former prime minister Nawaz Sharif’s appearance before accountability court in Islamabad. Abbasi fainted as the attack was so ferocious. Pakistan Federal Union of Journalists, Rawalpindi Union of Journalists, National Press Club and Freedom Network took up the issue with the PML-N leadership and the matter is being probed under Minister of State for Interior Talal Chaudhry. Hours after the attack, Nawaz Sharif regretted the incident and reiterated his support for press freedom.

Constables of Mumtazabad police station in Multan district of Punjab province tortured reporter Wajih Ahsan and cameraman Mirza Aslam Baig of Samaa TV on September 21 after SHO Imran Arif ordered the attack. Wajih told Lahore Press Club Safety Hub manager that they were working on package outside the police station when the concerned SHO spotted them ordering his subordinates to arrest them. “When we resisted the arrest they tortured us brutally,’ he went on to say. The Multan Union of Journalists (MUJ) protested the police attack and senior police officials suspended SHO Imran Arif, constables Liaqat Ali, Aslam and Ghulam Abbas and an inquiry is under way.

Newly-formed religious group “La Baik Ya Rasol Allah” attacked Neo TV crew and tortured on September 12. The Neo TV DSNG van was on its way back to office after covering the rally of Pakistan Tehreek-e-Insaf when some activists of the group approached the DSNG and started beating the staff, including reporter Usamn, cameraman Ali Raza and DSNG eningeer Ameer Hamza with sticks and stones and destroyed the van as well. Ayaz Shujah, bureau chief of Neo TV, said the religious group was “angry” that his Neo TV channel did not cover their activities.

ARRESTED: On September 17, military personnel took drone operator Ashraf Nankanvi and DSNG van driver Mohsin of Geo News channel into custody outside the office of Provincial Election Commissioner in Lahore.  The two TV crewmembers were using the drone technology while waiting to get results of by-elections for NA-120 constituency. The crewmembers were freed after senior staff member Zahid Sherwani assured the Provincial Election Commission officials that the channel will not use for coverage.

LEGAL CASE: Gilgit Baltistan Anti-Terrorist Court summoned on September 29 Daily Times newspaper’s Reporter Shabbir Saham to appear before the court on October 7. The journalist had filed in Daily Times in November 2016 a story on human trafficking involving allegedly ruling Pakistan Muslim League (N) legislators in autonomous Gilgit-Baltistan region. The regional government of PML-N filed a case under Anti-Terrorism Act against the journalist. The GB government attempted to arrest him last November from Islamabad but National Press Club and Pakistan Federal Union of Journalists resisted the move to save Shabbir.

In September 2017, no case of a physical attack on media offices were documented by the Press Clubs Safety Hubs Network. There was no formal ban or enforced censorship on a media house reported this month. No information was available on any media house being served with a legal notice from either official quarters or from private parties.

The Pakistan Press Clubs Safety Hubs Network also does extensive advocacy work to help sensitize all media-related stakeholders on safety and security of journalists and media institutions and media houses. Some of the key advocacy activities on journalists’ safety during July 2017 period included the following: