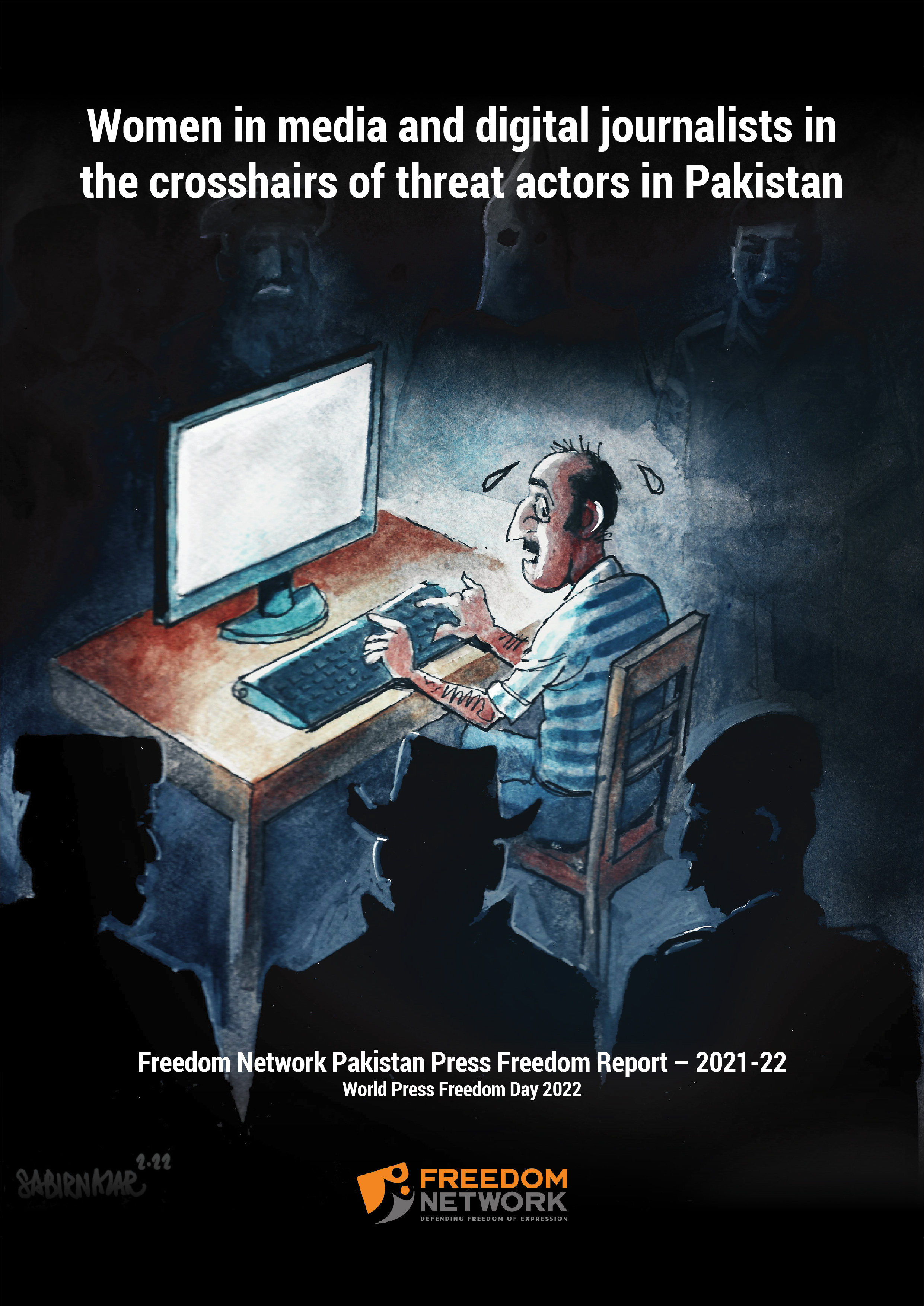 ISLAMABAD – 28 April 2022: At least 86 cases of attacks and violations against media and its practitioners, including journalists, took place in Pakistan over the course of one year – between May 2021 and April 2022. While the overall number of documented violations in the preceding year have gone down several notches, there is a continuing trend of targeting journalists working for digital media, according to this research and analysis report by Freedom Network, an award-winning Pakistan-based media rights watchdog that tracks violations against journalists and attacks on freedom of expression on an ongoing basis.

The report, released in Pakistan in 2022 to mark the World Press Freedom Day marked globally on May 3 every year, reveals that the state actors continue to be the largest threat source for journalists in Pakistan in a period marked by a dramatic escalation of coercion by the erstwhile Imran Khan government resulting in murders, legal cases, assaults, abductions, detentions and threats.

“As the digital media landscape is the new horizon over Pakistan, the government is more than anxious to crack down on online freedom and digital journalists are systematic target of harassment, abuses and legal threats. We must protect our borderless Internet freedom,” Iqbal Khattak, the Executive Director of Freedom Network, said.

The data shows that no place in the four Pakistani provinces, federal capital Islamabad or even Gilgit-Baltistan and Azad Jammu and Kashmir is safe – attacks against journalists are taking place everywhere.

According to the key findings of the Freedom Network Pakistan Press Freedom Report 2022, monitored for the period May 2021 to April 2022:

The most dangerous regions in Pakistan for journalists: Overall, Islamabad emerged as the riskiest and most dangerous place to practice journalism in Pakistan with 37% of the violations (32 out of total 86 cases) recorded in the federal capital. Sindh was the second worst with 27% of the violations (23 cases) and Khyber Pakhtunkhwa (KP) the third most dangerous with 19% (16 cases). These were followed by Punjab with 13% (11 cases), Balochistan with about 2% (two cases) and one case each from Azad Jammu and Kashmir (AJK) and Gilgit-Baltistan (GB).

The most targeted journalism mediums in Pakistan: TV and print media in crosshairs: Of the total 86 attacks and violations against journalists recorded in Pakistan in the period under review, TV medium emerged as the single largest victim of type of media with at least 39 cases (45%) of the cases against its practitioners compared to print, radio and internet. Print media was the second most targeted medium with 35 journalists working for it targeted (41%) while 12 cases (14%) were recorded of online journalists targeted. No targeting of a radio journalist was documented.

The biggest threat actors targeting media in Pakistan: In a whopping 41% of the 86 documented cases (at least 35 cases) of violations against media practitioners in Pakistan – thus the biggest threat actor – in the period under review, the victims or their families suspect the involvement of the State and its authorities and functionaries in the attacks on them compared to other influential threat actors. A group of miscellaneous ‘others’ with 24% (at least 21 cases) emerged as the second largest threat actor in the period under review. ‘Unknown’: The victims and their family, as well as the authorities and their employers, have been unable to identify perpetrators of violations against 22 journalists (25% cases). Surprisingly another category of threat actor identified by the victims, or their families, were political parties – constituting 4% (3 cases).

Digital media journalists in the crosshairs: In at least 12 of the total 86 violations (or 14%) against media practitioners in the period under review the targets were journalists working with digital media. These included 2 of the 4 journalists killed.