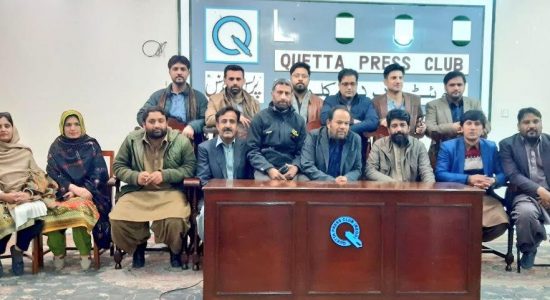 Sibi Press Club was conducting its annual elections in January 2021. While the elections were taking place inside the premises of the club, a group of web-based and social media journalists was protesting outside the club because they were not given membership. Later on, a scuffle broke out and members from both sides were wounded. This is just one example of divisions within the journalist fraternity in Balochistan which is undermining the battle for press freedom in the province.

Journalists outside Quetta blame the BUJ leadership for monopolizing the union for their interests. While the BUJ refers to the constitution of PFUJ which bars it from having members outside Quetta city.

Manzoor Ahmed is former finance secretary of the BUJ who lost elections for general secretary of BUJ last month. He said 99 percent of journalists who are based outside Quetta are “government servants” and that’s why they do not stand eligible to become the BUJ members. Ahmed alleged that these ‘part-time journalists’ use journalism to pressurize their superiors in government departments and get salary without working.

Moreover, there are multiple press clubs in many districts of Balochistan as it is the case with other provinces also. One is called district press club and another national press club or a similar name. Usually, what happens is that one group of journalists take full control of a press club and do not allow others to get elected. As a consequence, the left-out journalists establish own press club. Outside Quetta, press clubs are considered a source of “putting pressure” to get things done.

Furthermore, the advent of social media and online websites have created another category of journalists – digital journalists. Many people have started their journalism platforms on social media and claim to be journalists. However, there is absolutely no gatekeeping involved in their content dissemination process. This category is not considered as “pure journalists” by the BUJ, hence, they remain left out from the officially recognized journalistic paradigm. Ahmed says that opposition of social media journalists to BUJ cannot be called division within the journalistic community. “It’s basically opposition by non-journalists to the journalistic fraternity of Balochistan represented by BUJ,” Ahmed argues. The biggest question now is that what’s the criterion for being called a journalist in this modern age, he wonders. He is of the view that in the developed countries even citizen journalists can be considered full journalists but ground realities in Balochistan are not ready for such change yet.

This entire problem of divisions within the information disseminators or journalists is badly affecting press freedom in Balochistan, which is already a very difficult place to do independent and professional journalism. Once a member of one press club is threatened by government officials, the members of the rival press club downplay the threats and side with the government. Consequently, government officials get away with threatening journalists, especially in rural and remote districts.

Secondly, the BUJ does not raise voice for journalists outside Quetta when they are in trouble. Hence, they are left unprotected. Consequently, journalists outside Quetta become easy targets. Lastly, when journalists utilize their energies competing with one another for recognition and membership in press clubs and unions, they lose track of doing quality journalism. Many may not agree with this notion, indeed, as they say both are possible at the same time.