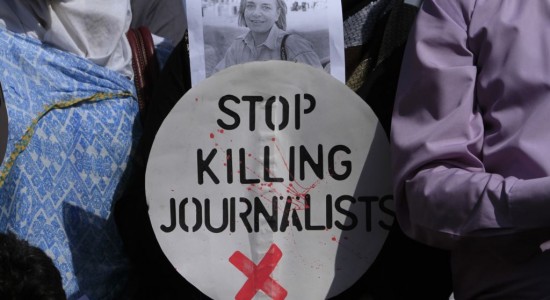 In the month of August 2016, a total of 15 cases of killings, threats, attacks and harassment against journalists in Pakistan were documented by the Press Clubs Safety Hubs Network. This included two journalists killed in Balochistan. Both cameramen journalists, Mehmood Khan of Dawn News TV and Shehzad Ahmed of Aaj News TV, lost their lives were killed in a deadly suicide bombing on a gathering of lawyers in Quetta in Balochistan on August 8, 2016, which killed over 70 people.

One journalist, Khan Zaman, was kidnapped in Hangu in Khyber Pakhtunkhwa, and released after three days in illegal custody, while a total of eight journalists were attacked and injured, including six in Sindh and one each in Balochistan and Punjab. The home of one journalist was attacked in Balochistan while the family of another, in Sindh, was also attacked. Two cases of censorship were recorded, both in Islamabad, in the same period.

The data shows that Sindh was the worst affected region in terms of numbers of incidents, with seven violations documented and Balochistan with four cases (including two journalists killed). Islamabad was the third worst region with two cases while one case each was reported from Khyber Pakhtunkhwa and Punjab. No case was documented in August 2016 from the Tribal Areas, Gilgit-Baltistan and Pakistan-administered Kashmir (AJK).

In the month of August 2016, a total of four cases of attacks on media offices on August 22, 2016 were documented by the Press Clubs Safety Hubs Network. These included attacks on the Karachi-based offices of ARY News TV, Samaa TV, Neo TV and the Karachi Press Club.

The attacks were conducted by charged workers of the Muttahida Qaumi Movement (MQM) goaded by the party’s London-based founder Altaf Hussain who asked his supporters to “teach these media [channels] a lesson for not providing [him] coverage.” The Pakistani broadcast media has not been providing live or indirect coverage to Mr Hussain after a ban imposed on his publicity by the Lahore High Court in 2015. Six journalists, including two reporters and four cameramen were injured in these attacks on media institutions.

There were no known cases of written or verbal threats, formal ban or enforced censorship on a media house. No media house was served with a legal notice from either official quarters or from private parties.

In the month of August 2016, a total of 12 cases of attacks and threats against various types of media documented by the Press Clubs Safety Hubs Network. These included 10 cases of violations against television media and two against print media. No cases were documented against radio media, online media and other miscellaneous media.

In the month of August 2016, the various reported or suspected threat actors attacking or threatening media included one non-state militant actor Jamaatul Ahrar, which claimed the deadly attack on lawyers in Quetta on August 8, 2016, which killed two journalists.

The single case of kidnapping of a journalist was suspected by his family and colleagues on security agencies. The synchronized attacks on four media institutions in Karachi on August 22, 2016, which injured six journalists, were conducted by political party MQM on instructions of its founder Altaf Hussain, which was documented on camera.

In one case of an attack on Khushab-based journalist Talib Hussain Bhatti in Punjab was conducted by the supporters of provincial minister Asif Bhaa. The attack on the home of Balochistan Union of Journalists President Hamd Ullah is suspected on security agencies while at least in one case verbal threat issued against journalist Khalilullah Musakhail and Barkat Marri in Balochistan was by a tribal chieftain.

The information collected here is based on reporting by victims or their families and does not necessarily imply it is verified, unless specified. The information filed here is aimed at analyzing trends for the sole purpose of informing strategies to reduce threats against media and its practitioners.

In this period, a total of eight cases of threats against journalists were reported to the press clubs and documented according to the officially detailed formats, reflecting a growing awareness among journalists about the Safety Hubs Network and its programs and promotion of a culture of documentation and verification. Based on their actionable nature, three of these eight cases requiring redressal of problems were partially resolved by the Safety Hubs and their managers, reflecting the impact of the mediation and advocacy of the hubs. Two cases were forwarded to the Pakistan Journalists Safety Fund (PJSF), also managed by Freedom Network, as a reflection of the inter-platform cooperation in the interests of journalists’ safety and security.

On the advocacy front, the six members of the Press Clubs Safety Hubs Network, undertook at least 18 separate and external general advocacy initiatives aimed at engagement of key stakeholders in the media sector on the issue of journalists’ and media institutions’ safety and security. The press clubs also conducted within their premises at least seven activities managed by the safety hubs indicating a growing priority by the press clubs for the safety of their member journalists and journalists and media workers in their respective regions.

Some of these key advocacy activities on journalists’ safety included the following: