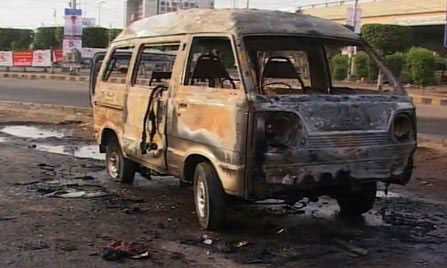 Freedom Network [FN] is deeply concerned at the spate of attacks on journalists working for Jang and The News and Geo News channel with the latest victim being the resident editor of daily Jang in Multan, Zafar Aheer, on May 31, 2014.

It said the attacks were in follow-up of airing of allegation by Geo TV that a state intelligence agency was behind the plot to assassinate Jang Group’s renowned journalist Hamid Mir on April 19, 2014 in Karachi.

“What is even striking is the fact that the media group is left unprotected and the state is failing to meet its constitutional obligation to protect lives and properties of these innocent Pakistani journalists even though the media group is making constant and desperate appeals for help,” the press freedom alert added.

Since Hamid Mir sustained six serious bullet injuries minutes after landing in Karachi, the media group has been continuously under attack from all sides with several of its journalists and media workers attacked, injured, harassed and intimidated. Geo News channel is 90 percent shut down through cable network across the country while the military unilaterally banned it and dailies Jang and The News in cantonment areas.

“The people’s right to know should not be denied through these coercive measures that Jang Group is experiencing,” FN alert urged and appealed the government to meet its constitutional obligation to protect the journalists working for Geo News, Jang and The News.

Hate-speech on rival private TV channels has put lives of working journalists at greater risk and Geo Newschannel has even had to resort to even whitewashing their DSNG vans and removing their logos and insignia to protect them from harm, the FN press freedom alert read.

Zafar Aheer told his editor that he was hit with gun butts by unidentified assailantswho injured him seriously. The attackers also left behind live bullets of AK-47 automatic rifle, popularly known as Kalashnikov, in his car, the journalist said while being treated at hospital bed for his wounds.

“I was going home from work when about six people riding two motorcycles and a car intercepted me. They smashed my car windowpanes and then hit me with their guns,” Aheer told Jang newspaper after being shifted to a hospital in critical condition.

Aheer said the attackers stopped him and declared him “an agent of the Indians and Jews” quoting the attackers as saying that he should be shot in his legs. The attackers also snatched cash and his mobile phone from him.

The president of his own faction of the Pakistan Federal Union of Journalists, Afzal Butt, told the meeting of Steering Committee of Pakistan Coalition on Media Safety in Karachi on May 16, 2014 that 35 attacks were reported targeting the Jang media group since April 19, 2014.

The attack on Jang Multan resident editor comes after unidentified assailants,armed with lethal weapons, set a van carrying the copies of The News to Islamabad on fire after creating panic among the people in Rawalpindi city in Punjab province on May 30, 2014.

In similar attacks, unidentified bike-riders set a vehicle carrying bundles of thousands of copies of the daily Jang and The News on fire in Lahore on May 25, 2014.

Van driver Nisar said he was on his way to the newspaper market when he was intercepted by four persons riding a car but he did not stop. They forcibly stopped the van near the state-runPTV station, hurled abuses and threats at him, telling him to come out.Meanwhile, two bike-riders sprinkled oil on the vehicle and set it on fire. The driver ran away to save his life, said a report on website of The News.

On June 2 and 3, 2014, more attacks were reported on vans carrying Jang and The News for distribution in Quetta and Karachi.

Similarly, Jang Peshawar Resident Editor Malik Arshad Aziz told FN he had received “life and property threats” after the launch of “sponsored” and “hate-speech campaign” against Jang and Geo group by powerful elements of the society. “We are declared traitors and asked to quit the organization,” he said.

“On May 5, 2014, we received a threatening and warning letter in our printing press at Hayatabad, Peshawar. Jang and Geo management and staff have been accused of (being) anti-Pakistan, anti-Islam and anti-army. We were asked to shut down our offices in Peshawar otherwise should be prepared for serious consequences. Employees were also directed to quit and leave the traitor group immediately,” the resident editor gave details of the letter.

“Tension is increasing among my staff because of agitation and rallies from religious and banned organizations in different cities of Pakistan. Keeping in view the existing circumstances and threatening letter, I and my staff members’ lives are at risk.  The Staff is feeling insecure, worried and depressed. Our offices and installations are also in perilous condition in Khyber Pakhtunkhwa.”

Caption: A van carrying Jang and The News copies is burnt in Karachi on Monday.